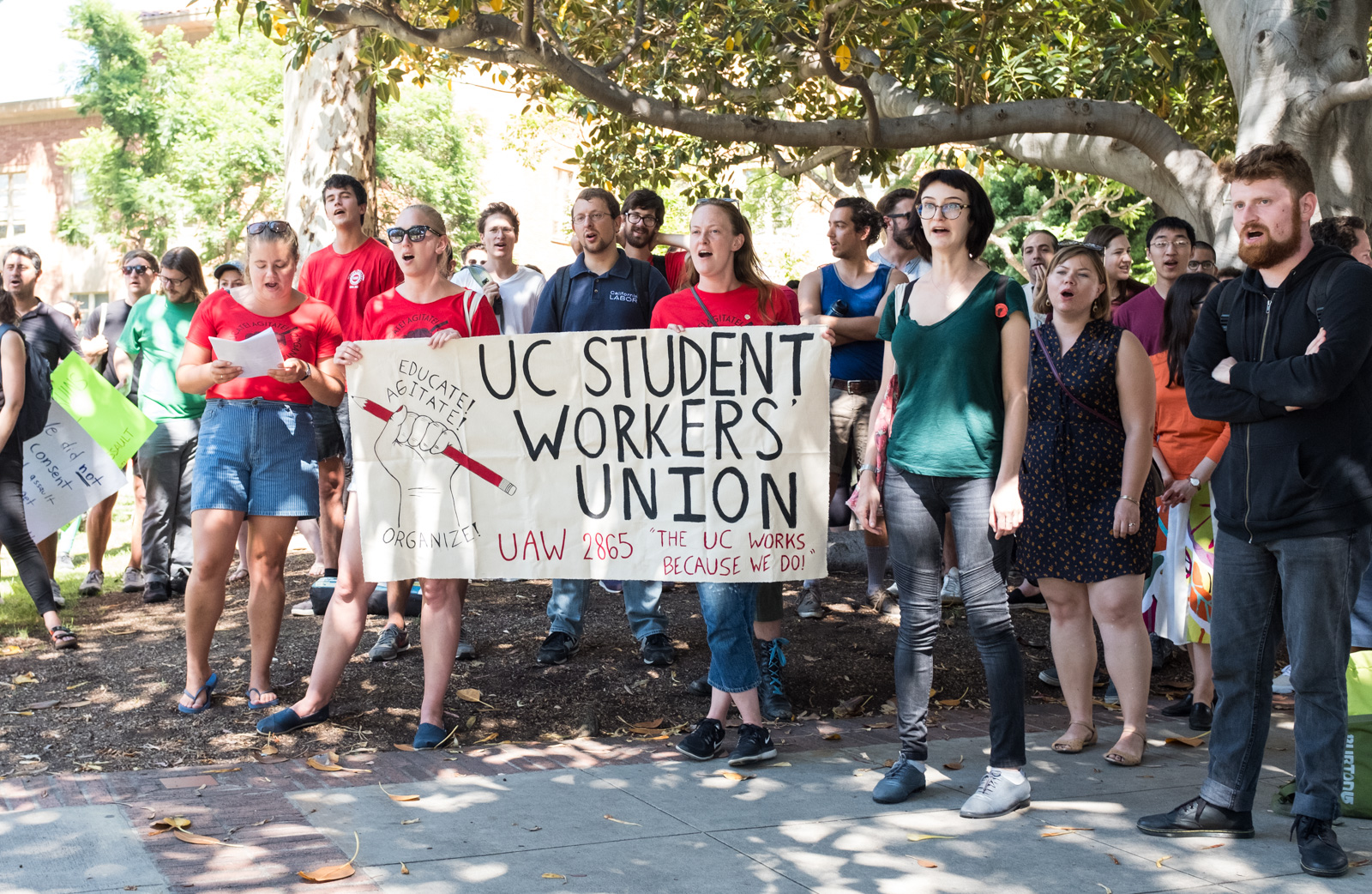 University of California student workers reached a four-year contract with the UC Office of the President on Aug. 23 providing harassment and discrimination protections and new benefits.

Student workers represented by United Auto Workers Local 2865 came to the agreement after six months of negotiation with the UC.

UAW 2865 is the union that represents over 17,000 academic student employees, including graduate student instructors, graders and tutors at the UC. Members of the union ratified the contract with a 58.6 percent majority vote.

The new contract stipulates an annual wage increase of 3 percent and a $300 annual remission of campus fees starting January 2019. Eligible employees will also be able to obtain a $100 bonus in November.

The pay gap between the UC and top competitor universities was $3,397 according to UAW 2865. Jonathan Koch, the UAW 2865 campus chair at UCLA, said he thinks the University did not do enough to bridge this pay gap.

UC spokesperson Danielle Smith said the wages stipulated in the contract are comparable to wages at similar public research universities.

Bargaining team co-Chair Alli Carlisle said the union proposed a housing stipend and cost-of-living adjustment to make housing more affordable, but the University rejected their proposals. Carlisle said the union will be campaigning for Proposition 10 on the California ballot, which would allow local governments to freeze rent.

The University is now offering a $3,300 annual child care subsidy, up from $2,700 in the former contract. Mothers will retain six weeks of paid maternity leave, but will now have access to proper lactation stations on all UC campuses.

The contract established a joint labor-management committee that will give student workers a platform to address sexual harassment issues. Carlisle said the committee will advise the University on policies and practices relevant to sexual harassment.

Carlisle added the University will implement interim measures, or immediate accommodations, that will allow workers who report sexual harassment to feel safe while investigations take place. Carlisle added that survivor-centered remedies will also be implemented in order to give the survivors more power in deciding what resolution will best support them.

Student workers will still be able to use the grievance process concurrently with a Title IX investigation as requested by the union.

The University also agreed in the contract that it will request a valid warrant before immigration officials are allowed to investigate or seize an ASE while they are working on the UC campus premises.

“UC has pledged to vigorously protect the privacy and civil rights of undocumented students and community members,” Smith said.

The new contract offers paid leave for workers to attend immigration-related appointments for themselves or their family members. Moreover, if immigration officials make an inquiry into one of its workers, the University will notify the union and the worker.

Koch said these notifications will allow the union to rapidly organize legal defense for its workers.

Under the new contract, workers who lose their work authorization due to changing immigration laws will be guaranteed a meeting with supervisors to find adequate re-employment upon regaining legal standing.

The University did not renew the Instructional Opportunities Committee, which had been created in 2014 to support undocumented graduate students in their academic and professional development.

“The Instructional Opportunities Committee met its stated goals and purposes in 2015, so there is no reason to continue the committee,” Smith said.

Student workers with disabilities will be provided with appropriate accommodations that meet their needs and are approved by the workers themselves. The University will also be converting single-occupancy restrooms to all-gender bathrooms.

All student workers under the contract will have to attend a paid orientation for them to get to know their union.

Koch said the union gained new benefits because workers came together to demand more from the University.

“None of that would have been possible if TAs, tutors and readers hadn’t stood together, joined their union and participated in collective action,” Koch said. “If people don’t join the union, then the union doesn’t have power because the union’s power is based on worker participation.”