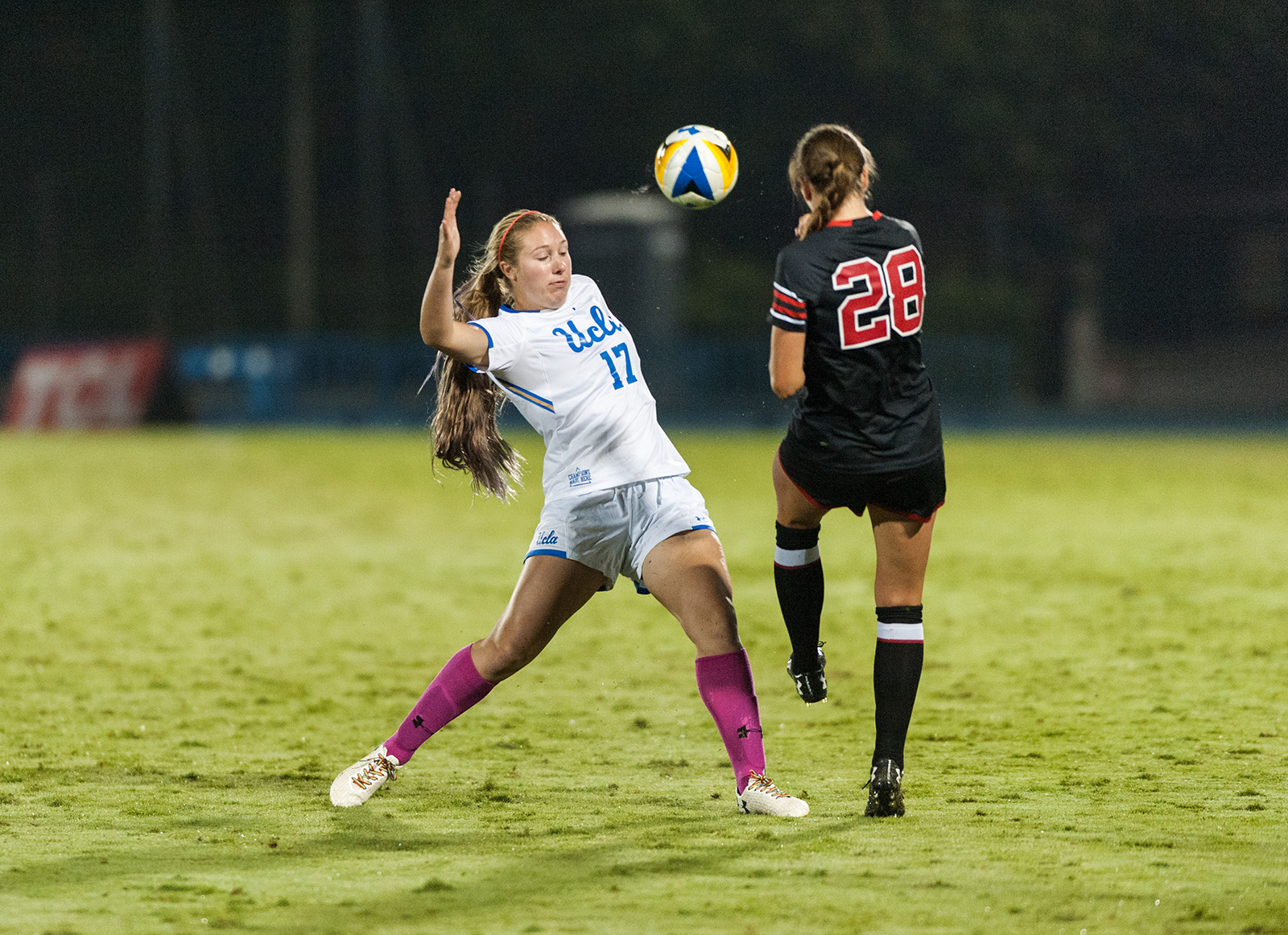 The Bruins have defeated the Nittany Lions in two straight matches. The last time UCLA faced Penn. State was in 2016, where the Bruins prevailed 1-0 in overtime. (Daily Bruin file photo)

UNIVERSITY PARK, Pa.—This clash at the top of the rankings was predicted to be close, but no one could have guessed it would have come down to inches.

The Bruins used the pace of their wingers early on to keep consistent pressure on the Nittany Lion defense in a new style designed to confuse the opponent by shifting into different formations as the offense progresses down the pitch. The high pressure resulted in seven UCLA shots to one from Penn State in the first twenty minutes alone.

“In the attack, we hope it looks like a lot of different things going forward,” coach Amanda Cromwell said. “Whether it be a 3-5-2 or a 3-4-3, hopefully we’re attacking with numbers going forward. That’s what we’re looking to do – keep teams off guard a little bit and try to overload some spaces.”

Despite the Bruins having much of the possession with its forwards and midfielders in the first half, it took the fresh legs of sophomore forward Ashley Sanchez to put the ball in the back of the net.

“(Penn State) had a lot of people here and they were definitely getting in our heads a little bit,” Sanchez said. “It was 0-0, so coming off the bench I knew needed to make an impact by bringing some energy to the game.”

Sanchez took the field in the 27th minute and capitalized on a Penn State defensive mistake to score 61 seconds later, hustling onto a Nittany Lion backpass and curling a shot past the keeper into the top-left corner.

But the lead didn’t last long.

Penn State earned a penalty kick two minutes after the UCLA goal and it was nailed into the bottom right corner by midfielder Emily Ogle to tie the score at one.

Junior midfielder Jessie Fleming left the game in the 35th minute with an injury. Without the center midfielder, the Bruins struggled to maintain possession as they had early in the half which allowed a number of goalscoring opportunities for the Nittany Lions.

“(Penn State) got a little more of the possession,” Cromwell said. “I think it was important just to get to halftime, honestly, and talk about what we wanted to do differently. … (Fleming) organizes and makes everyone around her better, so players had to step up.”

The Nittany Lion attack created two goalscoring chances that were close to breaking the deadlock for Penn State had it not been for junior keeper Teagan Micah.

Micah made a diving save to block a header from forward Kristin Schnurr and minutes later made a 30-yard dash from her goal-line to stop a Nittany Lion through ball from creating a shot.

Micah tallied five saves in the game and climbed into the all-time top-five in career saves in program history. The keeper has played in every game since coming in as a freshman.

“I’m fortunate enough to get minutes here so I do whatever I can do for my team,” Micah said.

The second half yielded numerous offensive chances for both sides, but the goalkeepers continued to preserve the tie – until the 70th minute.

Sophomore forward Delanie Sheehan launched a long ball from the right wing over the head of the Nittany Lion keeper, Amanda Dennis. Dennis caught the shot with both hands in the center of the goal, but after a video review, the ball was ruled to have crossed the line.

UCLA took a controversial 2-1 lead and worked for the rest of the match to protect it.

The Bruins’ aggressive play led to a total of 13 shots and five corners – not to mention four yellow cards – and a victory to kick off their three game East Coast swing against top-10 teams. 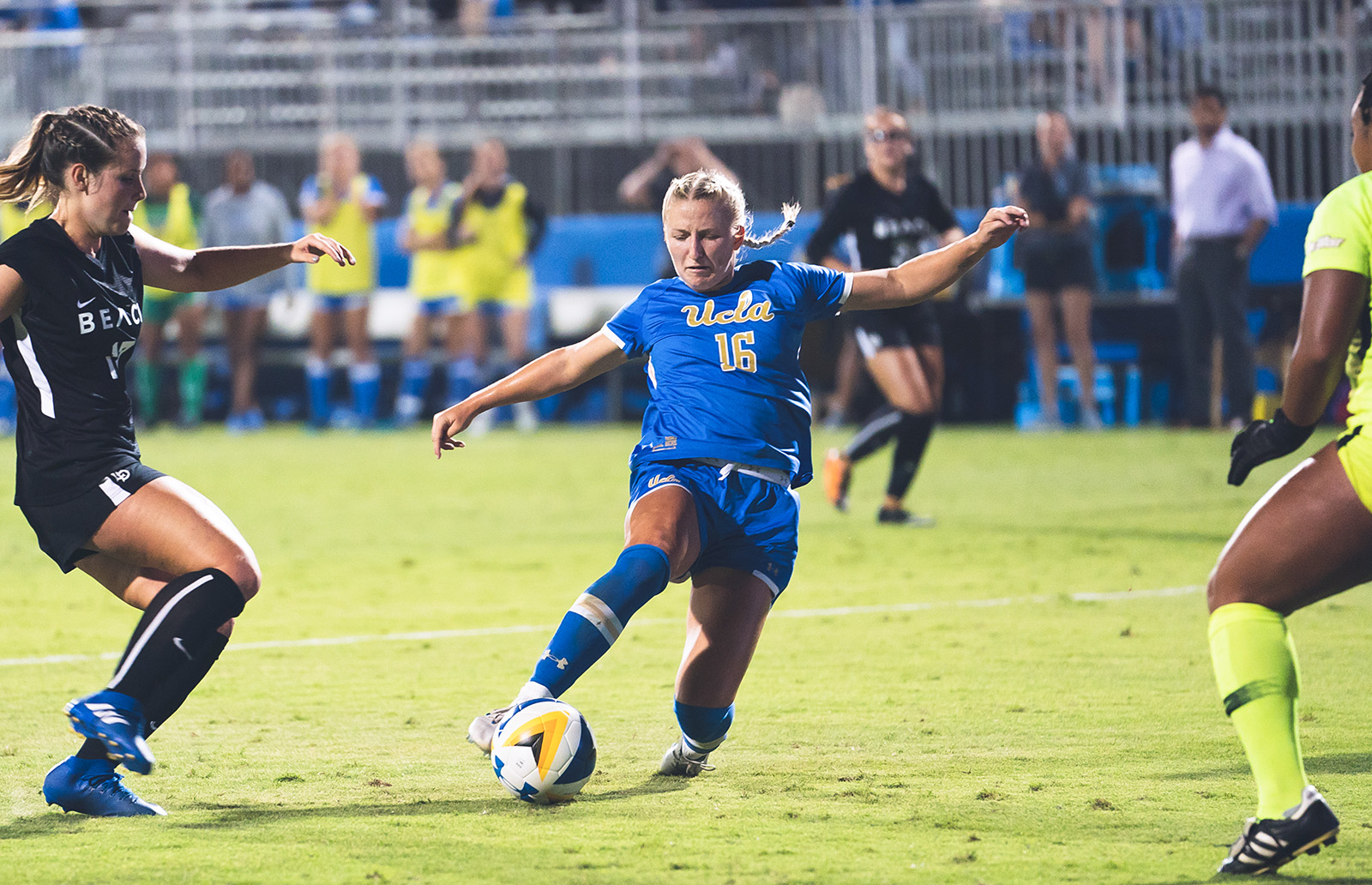