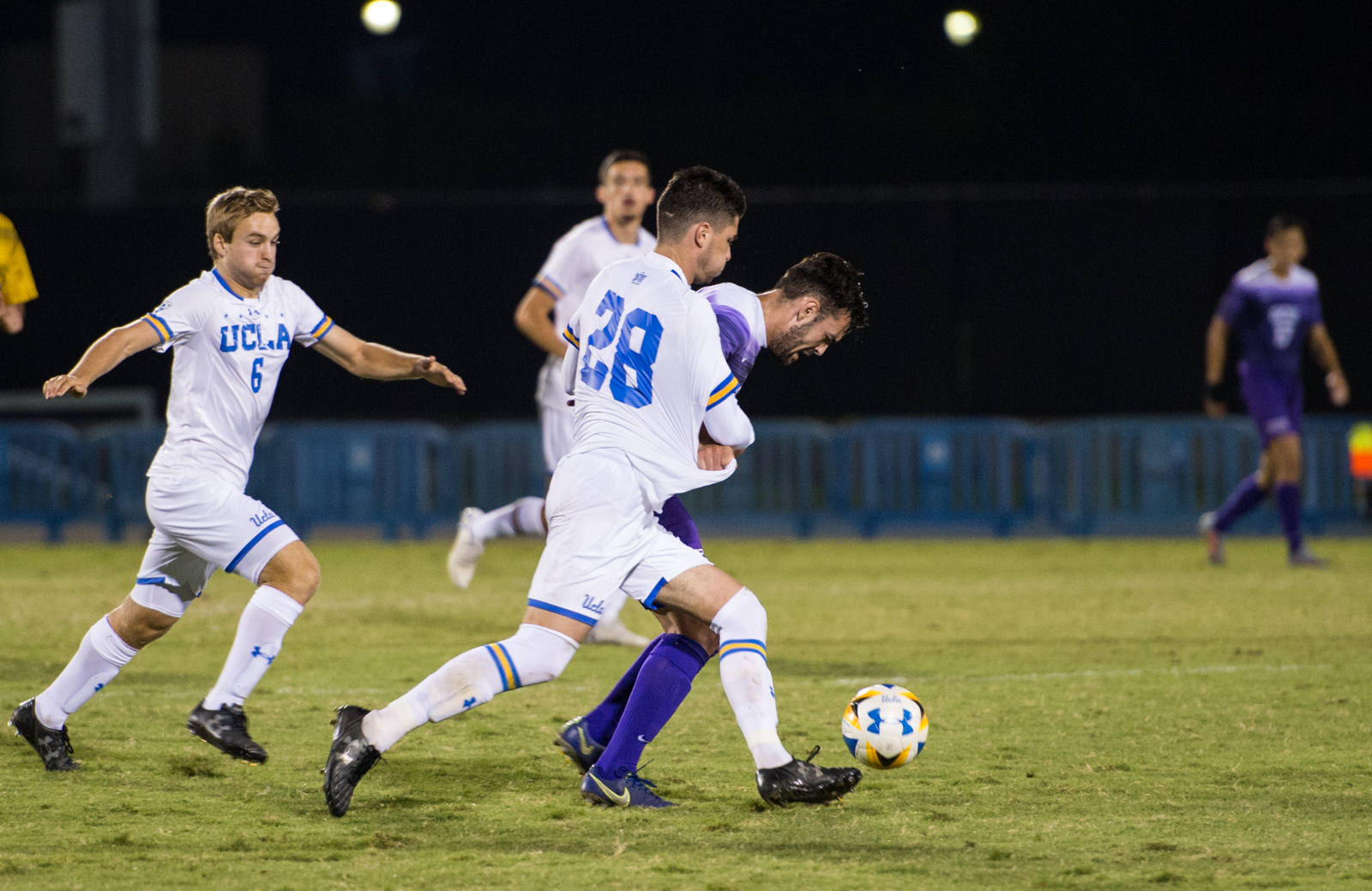 For the first time this decade, UCLA men’s soccer will open up the season outside of the United Soccer Coaches’ preseason top 25.

The Bruins still received 32 votes – the second most among nonranked teams – but last year’s historically poor season still hangs over them.

But that doesn’t mean the Bruins are without talent in 2018.

Redshirt junior defender Matthew Powell received an honorable mention for the All-Pac-12 team last season, despite starting on the defense that allowed the most goals in the conference. Powell said that his defense was missing depth last year, and that this year’s crop of top-ranked freshmen brings that into the fold right away.

“First of all, they’re adding tremendous depth to the group, something we lacked last year,” Powell said. “Guys will be contributing a lot and they’ve done a good job so far in preseason training and this first exhibition they’ve done well. I’m excited to see what they can do further on.”

Powell scored two goals last year, and with 2017 leading scorer Brian Iloski and his six goals graduating, he comes back to Westwood as one of the top returning goal scorers.

After last season, Powell said he and his teammates have learned from their mistakes. However, he said he didn’t want people to overlook the talent his team has.

“Every year, we have the potential to win the Pac-12, win the national championship,” Powell said. “Now, it’s just a shift in mentality where we’re taking it game by game, whereas last year, maybe our goals were too far-stretched.”

Two of the other new players joining the Bruins this fall are junior transfers forward Mohammed Kamara and midfielder Carlos Rincon. The two have been unable to play in preseason matches, but Salcedo said they impressed in the intersquad games last week.

“The two of them are starting to get themselves a little bit sharper, a little bit fitter,” Salcedo said. “It’s going to take some time for us to really integrate them and get them working with the whole group.”

UCLA will start the season on the East Coast, but the Bruins will play just four games outside the state of California this season. Of the 18 games on their schedule, four will come against ranked opponents, while five other games will be against teams who received votes.

With plenty of nationally recognized competition on their slate, the Bruins will need consistent goalkeeping to play up to their opponents and put last year behind them. However, Salcedo is yet to pick his goalkeeper, with freshman Justin Garces, senior Cole Martinez and sophomore Aristides Costeas battling it out for the starting gig.

“It’s completely up in the air,” Salcedo said. “It’s a healthy competition, they all push each other, they all work hard. I feel confident that whomever rises to the top is going to be a good performer for us.”

Despite it being his first few weeks with the team, Garces said that he and his teammates are ready to put 2017 behind them, regardless of who gets the starting goalkeeper job.

“The past is the past – it’s a new year, it’s a new team,” Garces said. “We’re going into the season open-minded and with a clean slate.”

UCLA kicked off exhibition play Tuesday with a 2-0 win over Grand Canyon. Powell headed in a cross from senior defender Erik Holt in the 35th minute to put the Bruins up 1-0, and sophomore forward Santiago Herrera netted UCLA’s second goal seven minutes later.

The Bruins closed out the preseason with a 1-0 win over UC Irvine. Sophomore midfielder Andrew Paoli scored the lone goal with a strike from 25 yards out in the 71st minute.

UCLA will be kicking off the season on the road against No. 18 Coastal Carolina on Friday afternoon. The Chanticleers are fresh off a round of 16 finish in last year’s NCAA tournament and have gone to the tournament eight years in a row.

Coastal Carolina was 14-9-2 last season, with an 8-2-2 record at home. Salcedo said it will be tough to go on the road against this talented a squad, especially when the Chanticleers have a significant home-field advantage.

“Any time you go on the road against a good team, it’s always a challenging match,” Salcedo said. “There are some unknowns – no team has played a real game so it takes time to gather information to prepare.”

UCLA and Coastal Carolina will face off Friday at 4:30 p.m., with the Bruins’ starting goalkeeper still unknown.