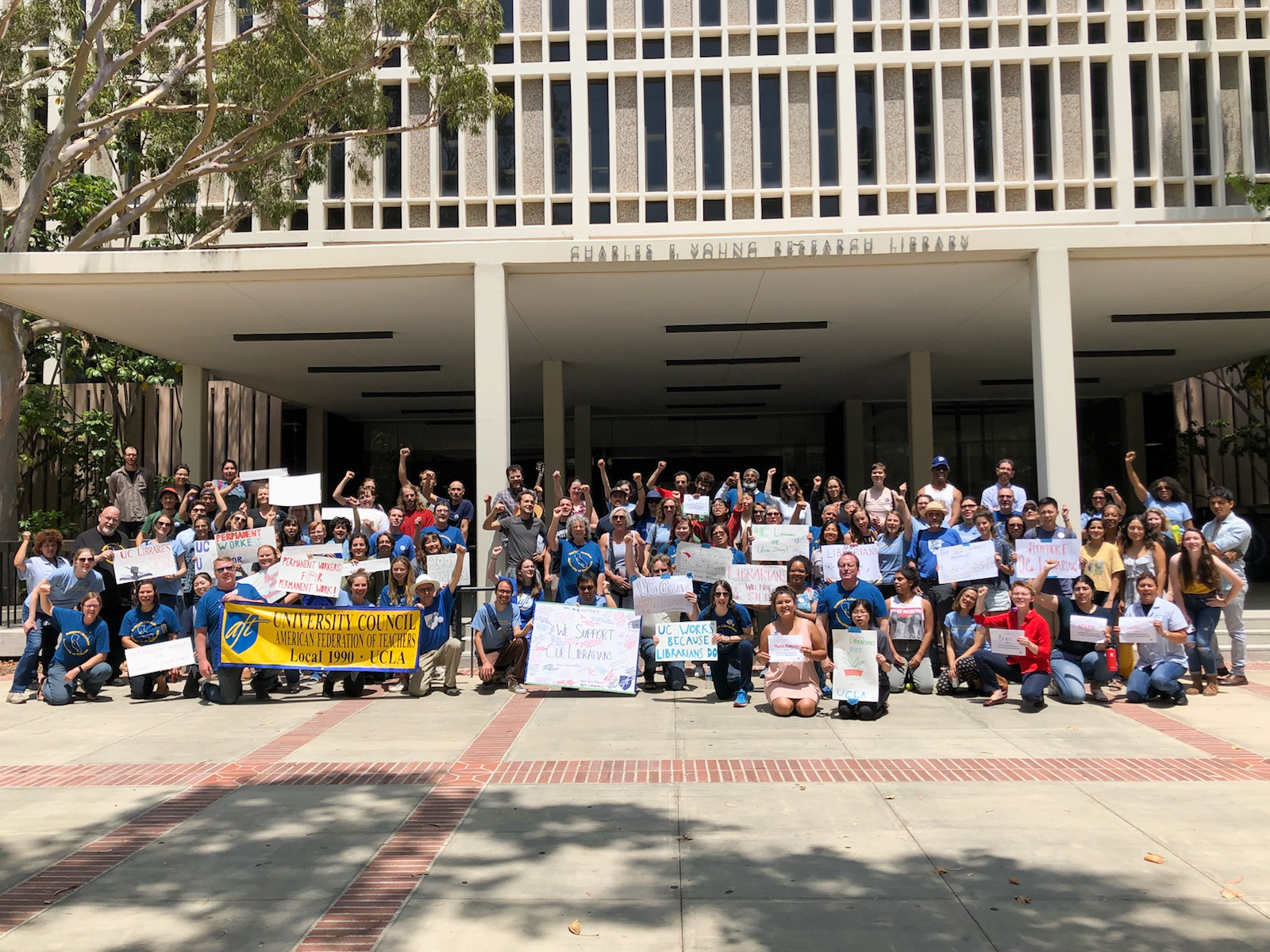 About 100 people attended a rally Thursday in support of the University of California librarians during their contract bargaining session. (Courtesy of Holly Craig-Wehrle)

University of California librarians held a rally Thursday to support their cause during a bargaining session with the UC Office of the President.

About 100 people attended the rally, which was held by University Council-AFT, a union that represents UC librarians and non-Senate faculty, in front of Charles E. Young Research Library during the fourth bargaining session between UCOP and the librarians’ union. The current librarian employment contract will expire Sept. 30.

“UC librarians are paid on average 20 percent less than librarians at (California State University schools) and community colleges,” Craig-Wehrle said. “We lose a lot of librarians in search of better salaries.”

Former temporary librarian Courtney Dean said her contract ended June 29. She said she had to use her health insurance benefits before her contract expired and had to apply for unemployment to continue paying for regular expenses like rent.

“This is endemic of our profession overall,” Dean said. “It’s especially egregious at UCLA.”

Dean added that she thinks it is frustrating that librarians must deal with these issues of job insecurity despite having years of professional experience and a master’s degree, which is required of all UC librarians.

Craig-Wehrle added that librarians want the same academic freedom, or the ability to research and teach ideas and facts that may be politically inconvenient to authority figures, that students and faculty have.

“Over the years, we have seen more and more that the UC has actually challenged (the academic freedom of librarians) and people have gotten in trouble over doing research the UC didn’t like,” Craig-Wehrle said.

Martin Brennan, a member of the UC-AFT bargaining team and a librarian at YRL, said temporary librarian positions are a point of contention between the union and the UC.

“Our contract lays out situations in which a temp librarian is appropriate, and one of those is when you are working on a time-limited project,” Hughes said. “(However), none of the projects we’re working on are time-limited. They’re all ongoing work.”

Hughes added that her contract ends in January and she may need to move to find another job. Often times, temporary librarians are not financially secure and continually have to apply for new jobs.

Dean added that UCLA librarians do not have enough staff members to process existing and incoming archival materials, which is exacerbated by the high turnover rate of temporary librarians.

“We have an enormous backlog of collections that have been sitting downstairs basically hidden away for decades that we don’t have the staff to address,” Dean said. “And we’re continuing to bring in thousands of thousands of boxes of new material.”

Brennan said UC-AFT would like the new contract to include terms about librarians’ academic freedom, such as those that say that librarians are able to do research without significant interference.

“We wanted to have it clarified in the contract that we have academic freedom and we wanted the right to sabbatical leave in the same way that faculty have that right,” Brennan said.

Brennan said UC-AFT is almost halfway through presenting its proposals for the new contract, but the UC has denied most of its proposals.

UCOP spokesperson Stephanie Beechem said the UC appreciates the UC librarians and aims to provide them competitive benefits through the negotiation process.

“We recognize and appreciate the critical role of UC’s librarians in advancing the University’s teaching, research and public service missions,” Beechem said. “Our goal is to reach a long-term deal that includes competitive pay, continued quality health care and excellent retirement benefits.”

A petition supporting the proposals that UC librarians are pushing for has reached over 400 signatures. The fifth bargaining session is scheduled to take place Aug. 8 at UC Berkeley.