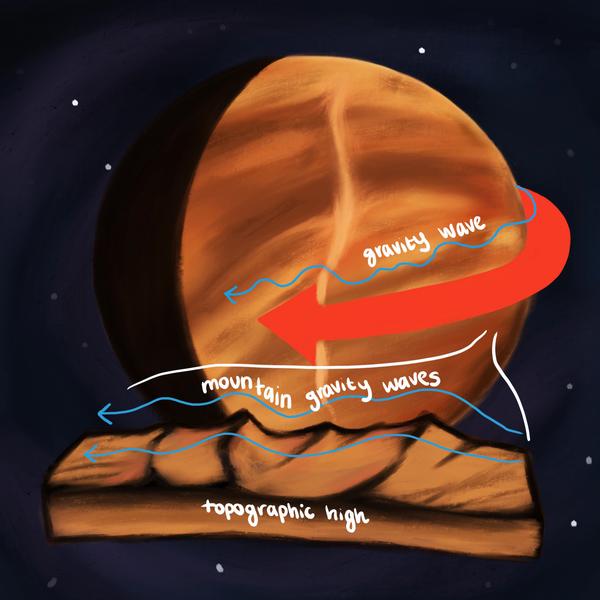 UCLA researchers may have discovered the cause of a huge, bow-shaped wave on Venus that has puzzled planetary scientists for years.

Their computer simulations of the Venusian atmosphere showed that wind blowing across mountains creates oscillations of the air, called mountain waves, that launch high into the clouds. The waves change how fast the planet spins on its axis, shortening its rotation period by about two minutes each day. The researchers reported their findings in a paper published June 18 in Nature Geoscience.

Thomas Navarro, a postdoctoral scholar in Earth, planetary and space sciences and co-author of the paper, said the results could partially explain why past measurements of Venus’ length of day from NASA’s Magellan and the European Space Agency’s Venus Express spacecrafts differed by seven minutes.

The researchers investigated a large wave observed by the Japanese spacecraft Akatsuki in 2015, Navarro said. As Akatsuki orbited Venus, infrared cameras onboard the spacecraft captured a wind disturbance at the top of the clouds shaped like a bow, extending nearly from the north to south poles.

“You have to remember that Venus is almost as big as Earth, so this is really massive,” he added.

Venus takes 243 Earth days to spin on its axis once, but its atmosphere at high elevations circulates around the planet in four Earth days, a phenomenon called superrotation.

Navarro said that despite the very fast winds, the roughly 10,000-kilometer wave remained stationary on Venus while the Akatsuki spacecraft observed it over several days, meaning the wave originated from the surface of the planet rather than the superrotating atmosphere.

To understand how the massive stationary wave was generated, the researchers simulated Venus’ atmosphere using a mathematical model like those used for weather forecasts or climate studies of Earth, he said. The researchers also incorporated data from Magellan, which used radar to map the surface of Venus.

Gerald Schubert, a UCLA professor emeritus in Earth, planetary and space sciences and a co-author of the paper, said most previous models of Venus’ atmosphere did not take into account the planet’s topography and assumed that the surface was a smooth ball.

A few models that used lower resolution maps severely underestimated the slopes of mountains and also did not produce the massive mountain wave, Navarro said.

Makoto Taguchi, one of the researchers working on the Akatsuki mission who discovered the atmospheric wave, said it was surprising that the model accurately reproduced the stationary wave. The waves in the simulation arose throughout the daytime on Venus, which is in line with Akatsuki’s observations. They appeared above most of the highlands on Venus at around noon and vanished at dusk, while waves above the Beta Regio region appeared earlier in the morning.

Navarro said that once the researchers could simulate the massive mountain wave, they saw that the waves exerted a torque on the solid body of Venus, or changed its rotation. Researchers had long suspected Venus’ atmosphere was interacting with the solid planet because the air is so dense, he said.

Schubert added that Earth’s atmosphere also interacts with the solid Earth and changes its length of day.

“The magnitude of the Earth’s rotation changes by about milliseconds, so nobody worries about it,” Schubert said. “The effect is much larger on Venus because its atmospheric mass is about 100 times greater than that of Earth.”

The researchers think Venus’ rotation rate might be changing constantly because of the fluctuating motions in the atmosphere, Navarro said. He added that though the calculations showed the planet spun faster overall after one day on Venus, some factors are not fully accounted for in the model, such as the sun’s gravity acting on the solid planet and winds at a lower elevation in the atmosphere. Torques from these other phenomena might balance the effect of mountain waves, making the planet’s rotation rate stable on average over a long time.

Schubert said he thinks the findings of this study will help researchers determine what kinds of spacecraft and instruments to send to Venus in the future. Accurate measurements of atmospheric motions near Venus’ surface might enable researchers to understand the mysterious origins of the planet’s slow rotation and the atmosphere’s superrotation.

Navarro added that Venus is a planet that was like Earth at one point, but evolved differently, and he thinks studying Venus could reveal why the planet has a large greenhouse effect and is completely covered by clouds, which does not allow life to thrive at the surface.

“We’re going to search for life on other planets in other solar systems,” Navarro said. “But maybe many of the planets we’ll be looking for will be actually (like) Venus and not Earth.”