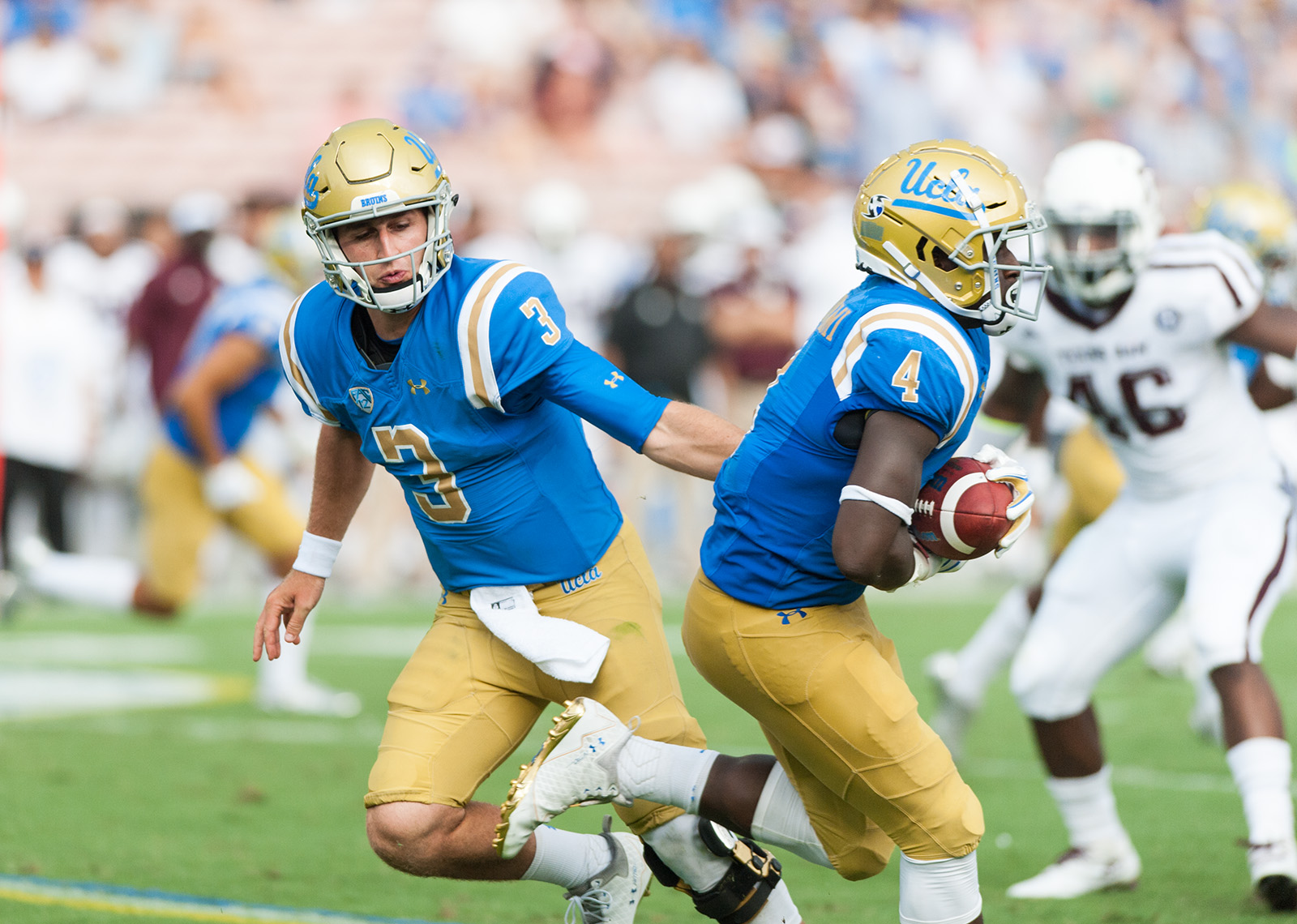 After trailing by 34 points, former UCLA quarterback Josh Rosen led the Bruins to a comeback victory over the Texas A&M Aggies in the first game of the season. (Aubrey Yeo/Daily Bruin senior staff)

UCLA Athletics had an eventful year, winning multiple national championships and staging several miraculous comebacks. Looking back on the year that was, the Daily Bruin Sports staff got together and picked eight of the Bruins’ most memorable moments of the year.

With just over 17 minutes left in the season opener, UCLA football trailed Texas A&M by 34 points.

The Aggies took a conservative approach to the fourth quarter to ride out a road victory, but the Bruins hit the accelerator. Then-junior quarterback Josh Rosen led the charge as the Bruins dominated the final 15 minutes of play.

At the completion of the final touchdown, the Rose Bowl shook with the excitement of UCLA fans – that is, the ones who stayed long enough to witness the historic event. And at the close of the game, fans blew up the internet with commentary, memes and hashtags, such as #ChosenRosen.

The matchup showed the country what Rosen could do. He finished the game with 491 yards, four touchdowns and no interceptions. He completed 19 of his 26 fourth-quarter passes for 292 yards, with all 4 touchdowns coming in the fourth quarter.

Bolu Olorunfunmi flies over defender in win over Oregon – Oct. 21, 2017

It was Bruin Family Weekend, and it was my first day-game at the Rose Bowl.

Eighty-two degrees, not a cloud in the sky and UCLA football was beating rival Oregon in the third quarter.

Then-junior quarterback Josh Rosen took the snap in the shotgun and handed the ball off to then-junior running back Bolu Olorunfunmi. He burst through a hole on the right hash marks and outran the rest of the Oregon defenders for what looked to be a 22-yard touchdown. But Olorunfunmi still had one man to beat.

So he jumped over him.

My brother, and even my sister – who has almost zero interest in football – started jumping around and yelling, as did the rest of the Rose Bowl.

UCLA won by 17, the weather was great and I spent some quality time with my family, but Olorunfunmi was the highlight of the day.

But that didn’t stop the then-freshman midfielder from scoring the penalty kick that sent the No. 2-seeded Bruins to the NCAA championship final for the first time since 2013, when they won the program’s first and only title.

The match against the No. 1-seeded Blue Devils was dominated by defense. At the end of overtime, both sides were scoreless despite 14 shots from UCLA and 10 from Duke.

With a chance to play No. 1 seed Stanford in the final, UCLA coach Amanda Cromwell pulled two players off the bench for her team’s penalty kick lineup.

Canales was one of them.

After a crucial save from then-sophomore goalkeeper Teagan Micah, the shootout was knotted at 3. A goal from the Bruins would win the match; a miss would mean another round of shooters.

Canales scored it high and right for the UCLA victory.

For Bruin fans, victories over the Trojans are always sweet. But in USC’s backyard, they’re even sweeter.

UCLA men’s water polo had lost to USC two weeks earlier in the Mountain Pacific Sports Federation championship game, and was falling behind 3-1 in the second quarter of the NCAA finals at USC. Then, playing in their final games as Bruins, then-senior trio Alex Roelse, Max Irvin and Matt Farmer scored five straight goals on the way to a come-from-behind 7-5 victory and the program’s 11th national championship.

The seniors ended their last season the same way they ended their first and second: a championship game victory over their biggest rivals.

Before the game ended, then-redshirt sophomore goalie Alex Wolf scored his lone goal of the season to prevent the Trojans from regaining the lead. The team, coaching staff and Bruin fans – who traveled and filled up the away side of the stands – dove into the pool to celebrate the culmination of a wild season.

Thomas Welsh has been hitting his signature 15-foot baseline jumper since he was 18 years old, but he added a 3-point shot to his arsenal before his senior year.

On the center’s 22nd birthday, he showcased just how deadly it was.

UCLA men’s basketball needed a victory against USC to keep their March Madness hopes alive. In front of a sold-out Pauley Pavilion, Welsh delivered 21 points total and a go-ahead 3-pointer with under a minute remaining.

By the end of his senior year, Welsh had taken 113 3’s and made 40 percent of his attempts.

Welsh wore a clear face mask to protect his broken nose that day, but still hit three shots from deep, as well as two free throws with 11 seconds left to ice the game.

The crowd showered the senior with the singing of “Happy Birthday.”

After defeating the Trojans 82-79, the Bruins upset the Arizona Wildcats in Tucson to boost themselves back into the national picture and help secure their NCAA tournament bid.

With 42 seconds left on the clock, Jordin Canada gave the Longhorns no room for a comeback.

Up 80-72 in the Sweet 16, the then-senior guard hauled in a rebound, finished a coast-to-coast layup and got the whistle. Instead of celebrating, she paused along the baseline with a straight face, clenching both fists before heading to the charity stripe.

Canada had dropped her 21st and 22nd points of the night, after only scoring 2 points in the first half.

The All-American dribbled out the last eight seconds, but Canada would tell you that her stat line was not the headline of the night.

It was the team effort that propelled UCLA women’s basketball to the Elite Eight for the first time in 19 years.

Canada – along with then-seniors forward Monique Billings and guard Kelli Hayes – led the Bruins to the Sweet 16 their sophomore and junior years, but couldn’t get UCLA over the hump.

In 2016, the Longhorns knocked off the Bruins in the Sweet 16. This time, No. 3 seed UCLA upset No. 2 seed Texas and had a chance to advance to its first-ever Final Four.

The Bruins were down, but in no way were they out.

UCLA gymnastics was fighting for its seventh NCAA championship against reigning champion Oklahoma, and it didn’t look good.

Then-sophomore Kyla Ross fell for the first time all season during her floor routine, leaving the Bruins in second place with a score of 49.4625 following the first rotation.

UCLA followed with another low score on vault in the second rotation, dropping into fourth place and trailing the leader, Oklahoma, by .3250 points halfway through the meet.

But Peng-Peng Lee would not let the Bruins lose.

In her last collegiate meet, the redshirt senior led UCLA to an improbable comeback in the last two rotations.

She scored a perfect 10 on the uneven bars and Ross bounced back with a 9.950 to put the Bruins just .1750 points behind the Sooners heading into their final rotation.

Ross scored a near-perfect 9.9875 on beam, setting Lee up to complete the comeback. Lee needed a 9.975 to clinch the victory, but delivered her second 10 of the night to clinch UCLA’s 115th national overall title.

The Seminoles knocked the Bruins out of the NCAA tournament the last two years and were in position to do it again.

The dual was knotted 1-1 by the end of the first flight. In the second flight, the Bruins took the first set on all courts and led most of the way in each subsequent set. Then-sophomore Savvy Simo put UCLA up 2-1 with a block at the net on court three.

Everything came down to the last two courts, and both UCLA pairs delivered. As then-juniors Megan and Nicole McNamara attempted their second shot at the championship point, then-sophomore Lily Justine ended the game with a kill onto the left side of the court.

The Bruins took home the program’s first NCAA championship and became the first team ever to win the title from the elimination bracket.