Baseball knocked out of NCAA tournament in Minnesota rematch loss 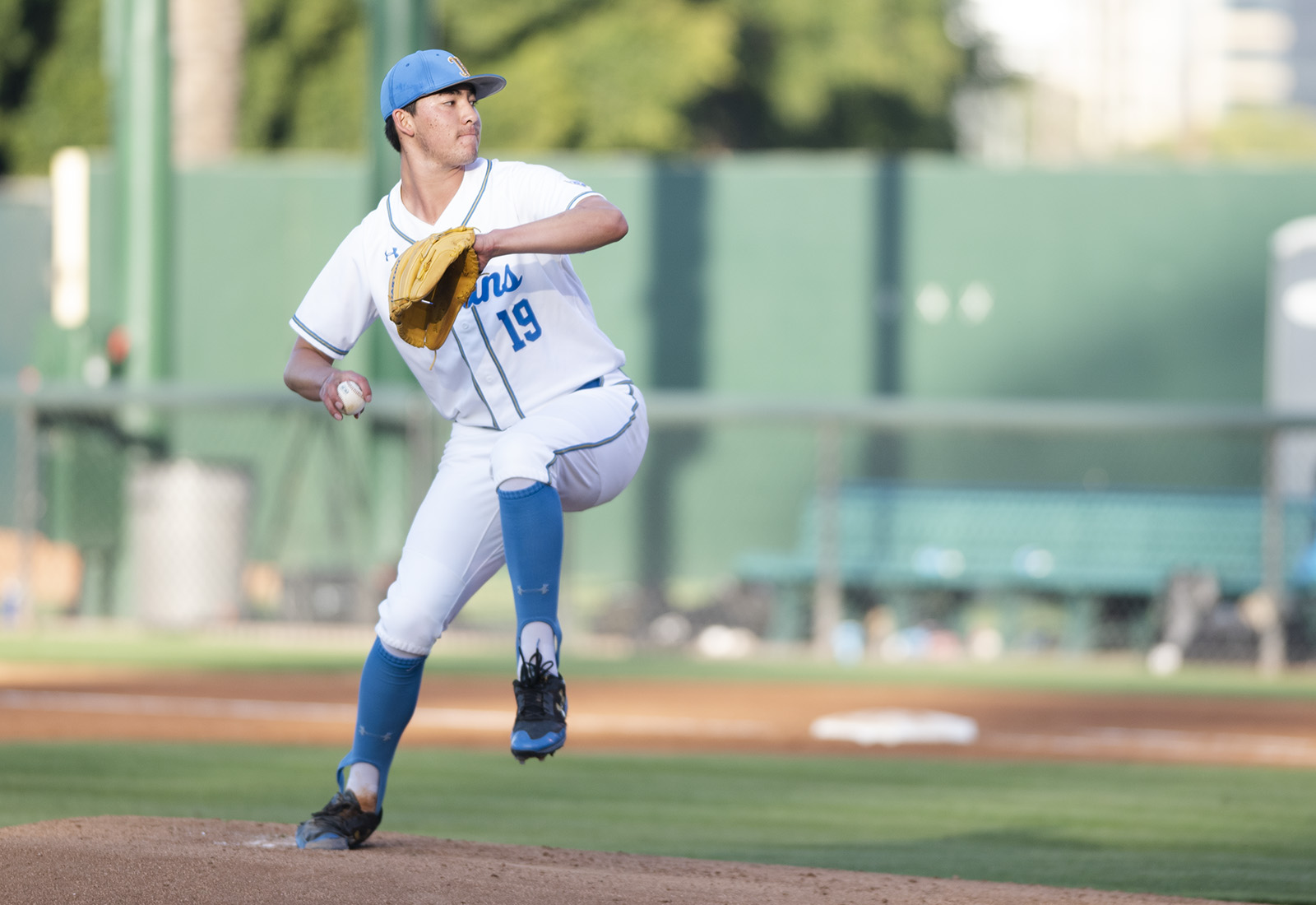 Redshirt sophomore right-hander Jack Ralston got the start for the Bruins on Sunday, but he was unable to make it out of the second inning against No. 1 seed Minnesota. The Bruins used six pitchers in the game and were knocked out of the NCAA tournament after losing 13-8. (Grant Mooney/Daily Bruin)

The Bruins ran out of arms.

No. 2 seed UCLA baseball (38-21) lost 13-8 to No. 1 seed Minnesota (44-13) on Sunday night in the Minneapolis regional, eliminating the Bruins from the NCAA tournament and ending their season.

The defeat came hours after the Bruins beat the Gonzaga Bulldogs, which extended their hopes of reaching the Super Regionals for the first time since 2013. But the short-handed pitching staff couldn’t contain the Golden Gophers, who continued their 11-game winning streak and reached the super regional for the first time in program history.

UCLA lost three starting pitchers to injury for most of the year, and until the playoffs, had largely avoided the consequences. Senior Jake Bird, freshman Zach Pettway and sophomore Ryan Garcia stepped up as the weekend starters to help record the third-lowest ERA in the country. The Bruins’ inexperienced bullpen consisted of four pitchers – sophomore Kyle Mora, freshman Holden Powell, sophomore Nick Scheidler, and redshirt junior Garrett Barker – who combined for a 2.57 ERA this season.

However, their depth was fatigued by a four-game stretch over the last three days.

“It was a very good year, and we dealt with a lot of adversity losing all those arms,” said coach John Savage. “(But) we’re very disappointed. Our expectations of the program are beyond this point.”

Redshirt sophomore pitcher Jack Ralston made his ninth start of the season. He has the highest ERA on the team at 6.44, but the Bruins faced off against Minnesota starter Jake Stevenson, who posts a 6.32 ERA.

Neither starter would last the second inning.

Ralston walked two batters and then gave up a 3-run bomb to center field to make it 4-2 Minnesota in the second frame. He was relieved by Scheidler, who gave up a 2-run homer and another run on a sac fly in 1 1/3 innings.

Savage replaced Scheidler with freshman Michael Townsend, who has pitched 7 1/3 innings all season. Minnesota capitalized on the inexperience with a 6-run fourth to take a 13-5 lead.

“The first four innings we really couldn’t do much on the mound, and it opened up the floodgates,” Savage said.

Sophomore first baseman Michael Toglia batted in the first run of the game in the first inning and finished the day 2-for-3 with two walks and a double. However, Minnesota answered with a run of its own in the bottom of the frame.

Freshman right fielder Garrett Mitchell hit 3 RBIs earlier in the day against Gonzaga, and continued his hot streak with an RBI single in the second frame against Minnesota, finishing with 6-RBIs on Sunday between the two games. But Minnesota answered with a 3-run homer to take the lead in the second inning.

Toglia tallied another RBI in the third inning followed by 2 more Bruin runs, but the Gophers posted another 3-run inning to take the lead once at 7-5. There were four lead changes in the first three innings.

Powell pitched three scoreless innings with no hits, but Minnesota’s fourth inning was the deal breaker.

“We’re third in ERA in the country – we haven’t had many games like that, maybe none,” Savage said. “This game felt different, (and) we’re not used to that type of game.”