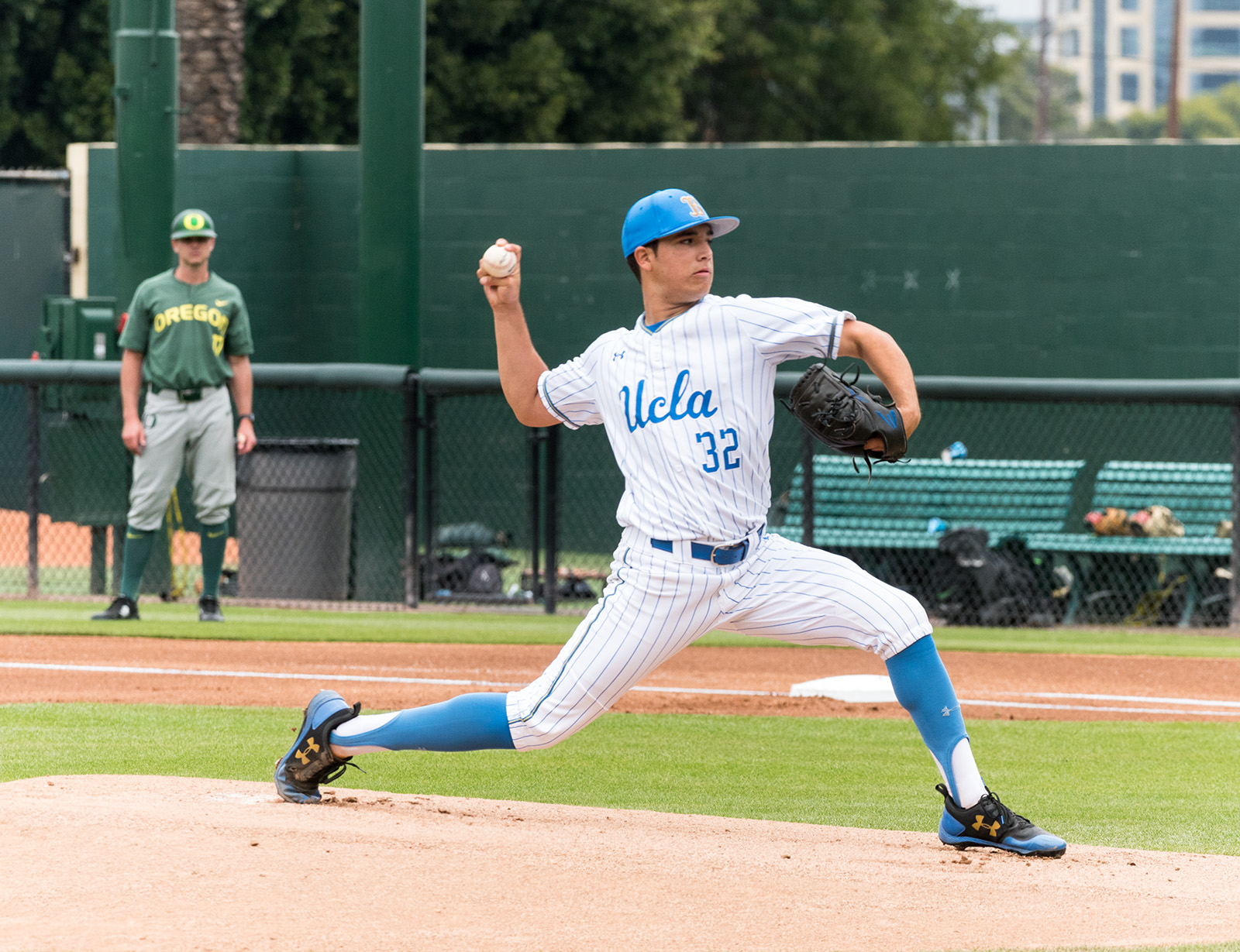 Sophomore right-hander Ryan Garcia didn’t allow a hit until the seventh inning, leading UCLA to a 10-4 victory over Gonzaga. The Bruins walked off against the Bulldogs on Friday, and will now rematch with Minnesota on Sunday night. (Grant Mooney/Daily Bruin)

For the first time since May 31, 2015, the Bruins won a playoff game by more than one run.

No. 2 seed UCLA baseball (38-20) knocked No. 3 seed Gonzaga (33-24) out of the NCAA tournament Sunday, taking down the Bulldogs 10-4. The Bruins had a .221 batting average in the first two games of the Minneapolis Regional, but hit .361 Sunday en route to a runaway victory.

The Bruins jumped out to a 2-0 lead in the first inning after junior designated hitter Jake Pries knocked a two-RBI single to left field. It was Pries’ first hit of the tournament, but his third and fourth RBIs of the weekend.

Gonzaga left fielder Jack Machtolf bobbled the grounder, allowing the second run to score. He mishandled another grounder in the seventh, which let the Bruins bring home another run. The Bulldogs had a .985 fielding percentage this year, good for second best in the nation.

The Bruins were able to hold that lead due to sophomore right-hander Ryan Garcia’s six plus no-hit innings. Garcia made it through six innings on 67 pitches and finished the day with one earned run allowed in 7 1/3 innings.

“He was sharp, and that was exactly what we needed,” coach John Savage said. “We need a lot of innings if we can get this thing done over the next couple days.”

In the first six innings of the day, Garcia threw 13 or fewer pitches in every frame.

“Going pitch-to-pitch really helped,” Garcia said. “I think – even though it was the most innings I’ve thrown – I felt good at the end.”

The Bruins offense returned to form Sunday, socring 10 runs after posting 6 and 3 on Friday and Saturday. Although he didn’t record an RBI, sophomore second baseman Chase Strumpf had two doubles, bringing his postseason total to five.

Freshman right fielder Garrett Mitchell fouled a ball off his right foot, then came back up and ripped a bases loaded triple to right with two outs to make it 8-1 UCLA.

Gonzaga made it a close one in the eighth – scoring on a two-run home run and an RBI-double – but the Bruins answered when sophomore designated hitter Jack Stronach ripped a pinch-hit double to make it a 10-4 game.

UCLA will now rematch No. 1 seed Minnesota on Sunday night after losing to the Gophers in ten innings Saturday night. The Bruins will go home if they lose, and will face off against Minnesota again Monday if they are able to win Sunday.