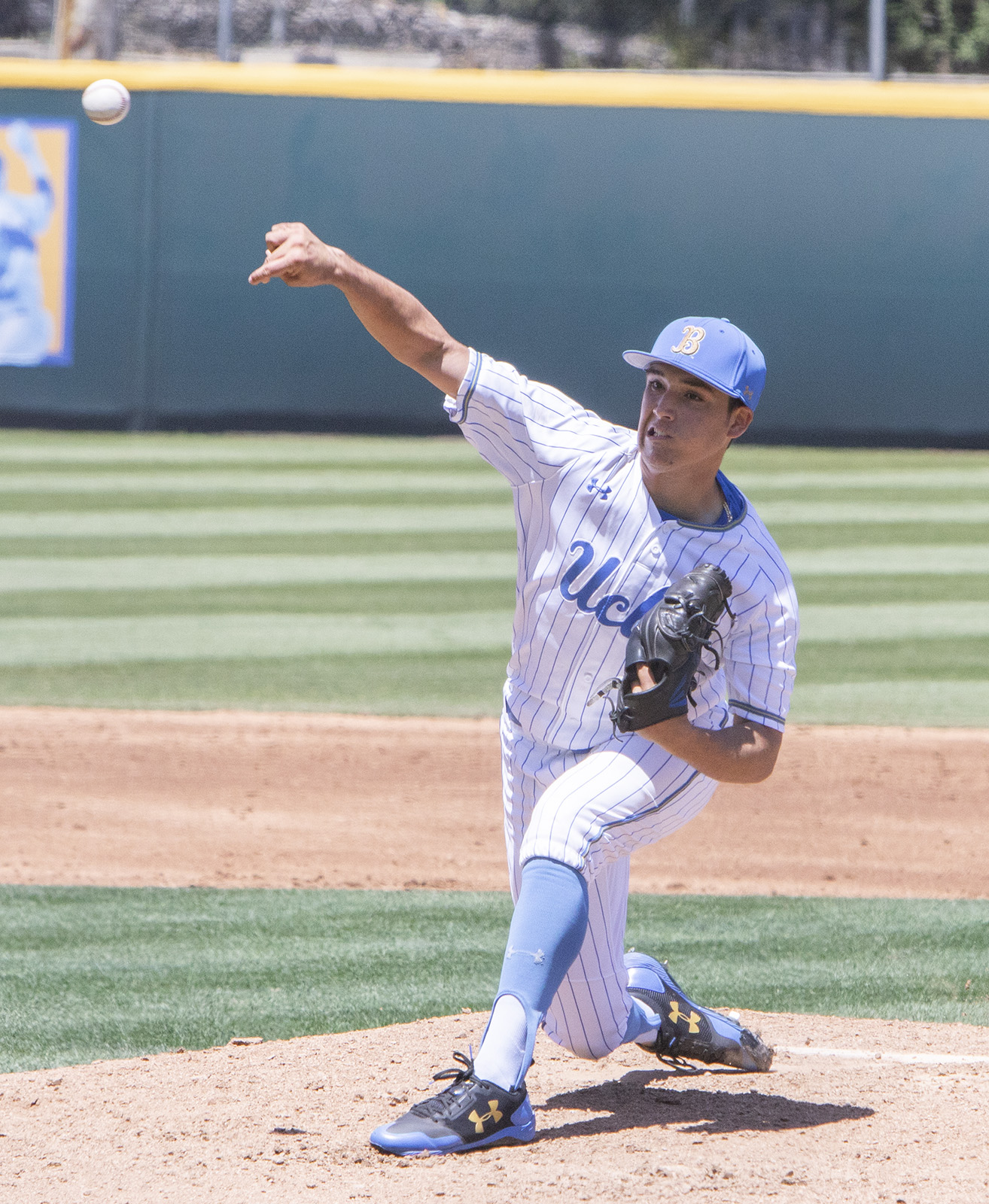 Sophomore right-hander Ryan Garcia pitched 6 2/3 innings – his longest outing of the year – without allowing an earned run. The Bruins’ pitching staff ended the weekend with a 2.00 ERA against the No. 1 offense in the Pac-12, Oregon State, stealing the series finale 4-1. (Ken Shin/Daily Bruin staff)

The Bruins proved to themselves that they can accomplish what’s needed in the postseason.

“We know after today what it takes to win,” said sophomore pitcher Ryan Garcia. “Now we (need to) carry that on in the playoffs.”

UCLA finished 5-11 against the top six teams in the conference and 13-11 in away games, but this win only boosted coach John Savage’s confidence.

“The conference is extremely deep,” Savage said. “It always prepares us for the postseason and especially a trip like this in a hostile environment with big crowds – we can certainly build off this win today and help us next week (in the playoffs).”

The Bruins scored two runs in the first frame. Sophomore third baseman Ryan Kreidler came up to the plate with the bases loaded and blooped a two-out single to take a 2-0 lead and end the Beavers’ starting pitcher’s day.

Junior Jake Hirabayashi started at second base in place of sophomore Chase Strumpf, who injured his heel Friday jumping over the Beavers’ first baseman while running out a ground ball. Savage gave him a precautionary rest day to prepare for the playoffs.

Hirabayashi plated the third run for the Bruins in the second frame with two outs.

Garcia started on the mound for UCLA and struck out Oregon State’s second baseman Nick Madrigal with runners on first and third in the first inning. It was the fifth time Madrigal struck out all season. Garcia popped up the next batter to get out of the inning unscathed.

The Beavers had a chance to take the lead in the fifth frame, but Garcia stood firm once again. Oregon State reached third base on a controversial call and placed another runner on second. Garcia threw a high wild pitch to let the run in and walked the next batter to bring up Madrigal, but he flied out to end the inning.

Madrigal came into the series batting a team-best .435, and will likely be a top-five pick in the upcoming MLB draft. He didn’t earn a single hit in 11 at-bats in the series, and his batting average fell below .400 for the first time all year.

Garcia lowered his ERA to 2.34 Saturday after allowing one unearned run on seven hits in 6 2/3 innings pitched.

Sophomore Jeremy Ydens, the reigning Pac-12 Player of the Week, hit a solo shot to left field to start the eighth inning, giving the Bruins a 4-1 lead.

Oregon State has the third-best batting average in the country at .318 and leads the conference with 410 runs scored. They scored a combined 7 runs against the Bruins in the series, the team’s lowest in any series all season.

“This game was kind of a culmination of a lot of frustration on the road in the past couple weeks,” Kreidler said. “(That was a) kind of time to prove ourselves on the road, (because) it seems like we’re going to be (away) quite a bit in these next couple weeks.”

The victory concluded an erratic season in which UCLA lost three probable starting pitchers to injury.

Their weekend starters – senior Jake Bird, freshman Zach Pettway and Garcia – led them to the second-best ERA in the conference but 10th in strikeouts per nine innings. Their offense knocked in 383 runs, second in the conference to Oregon State, and their most since the 2012 season.

“We really developed and battled through a lot of injuries, especially on the mound,” Kreidler said. “It shows a lot about this team that we’re able to come back and hopefully have a postseason bid.”

The team finished with their best record since 2015 when they went 45-16 to earn a No. 1 seed in the playoffs and then lost in the regionals.

The Bruins went on a run in April during which they went 13-3 – including a series win over Pac-12 champions No. 3 Stanford – moving up to first place in the Pac-12 and a No. 7 ranking.

UCLA then lost six out of eight games, getting swept by sixth-place Arizona and losing two of three against third-place Washington. UCLA swept Oregon but dropped to No. 18 in the rankings and fourth place in the conference, virtually losing their chance of hosting a regional in the playoffs.

“May was a tough month, but it was such a big April,” Savage said. “We played fairly well the last six or seven games heading into the postseason, so there’s a lot to build from.”

UCLA will hear about their playoff seed in the selection show Monday at 9 a.m. on ESPNU.