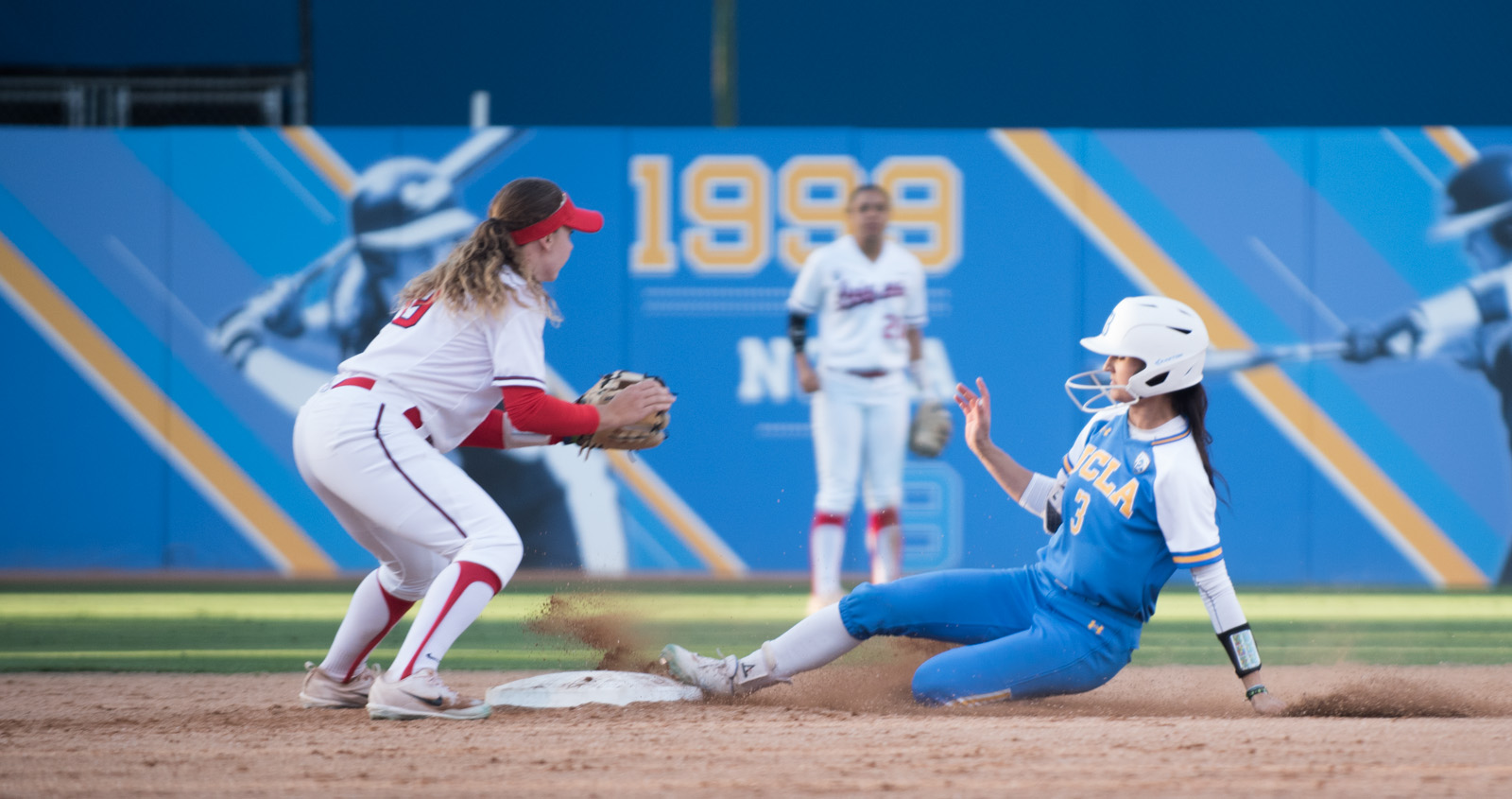 UCLA softball is headed to the Women’s College World Series for the fourth year in a row following a two-game sweep of Arizona. (Jenna Smith/Daily Bruin)

UCLA softball is heading to Oklahoma City next week, the site of the Women’s College World Series.

On May 19 and 20, UCLA faced elimination in three consecutive games after losing its second playoff game of the year to Cal State Fullerton. This past weekend, however, the team made quick work of Arizona, securing the program’s fourth consecutive WCWS appearance.

“No longer is it hope to get in there, there’s an expectation,” said coach Kelly Inouye-Perez. “Separate from getting to the World Series, we want to win it.”

The Bruins began the year with national championship aspirations and are now one step closer to achieving that goal.

Redshirt sophomore pitcher Rachel Garcia made her second consecutive start in as many days but initially struggled as Arizona got on the scoreboard in the bottom of the first. The Wildcats’ outfielder Alyssa Palomino hit her team-leading 19th home run of the season, smacking a change up that caught the heart of the plate over the right field wall.

“I’ll take that on the pitch,” Inouye-Perez said. “ I called an off-speed and she had been honing her on the hard stuff. Palomino is a great hitter and she connected on that hit.”

Garcia, the right hander who was named espnW Player of the Year this week, then gave up a single and a walk before escaping the inning without further damage.

Garcia would settle in after the first, dominating an Arizona lineup that averages 1.27 home runs per game, sixth best in the country. After giving up a pair of runs in the first, she finished the rest of her outing giving up just two base hits in a complete game effort with 10 strikeouts, a walk and a total of four hits allowed.

UCLA responded by scoring 3 runs in the following three innings, taking a 3-2 lead by the end of the fourth.

With two outs, the Perez sisters, senior infielder Kylee Perez and freshman infielder Briana Perez, hit their way on base before redshirt freshman outfielder Aaliyah Jordan hit a grounder up the middle, past the pitcher, to give UCLA what would be the game winning run in the bottom of the fourth inning.

Garcia followed Jordan by fouling out on the first pitch she saw with runners on second and third, failing to give the Bruins insurance runs.

Following Garcia’s pitching performance, UCLA would not need any more runs as it had secured its ticket to Oklahoma City, where it will take part in an eight-team double elimination tournament with the final two teams playing in a best-of-three series to determine the national champion.

Sophomore utility Bubba Nickles lead the team offensively going 3-for-3 with an RBI, while Briana Perez finished the night batting 2-for-4 with a double and run scored.

For redshirt senior utility Jelly Felix and the senior class of utility Madeline Jelenicki, Kylee Perez, pitcher Johanna Grauer and pitcher Selina Ta’amilo, this will be their fourth WCWS.

Nickles credits the graduating members of the team for setting the standard throughout the season.

“They have big expectations for all of us,” Nickles said. “They fire us up a lot and even when we’re down they pump us up. If they’re not having a good game they make it about the team and not themselves.”

The graduating class, with the help of the underclassmen, will look to cap off their careers as national champions, something the program hasn’t done since 2010.