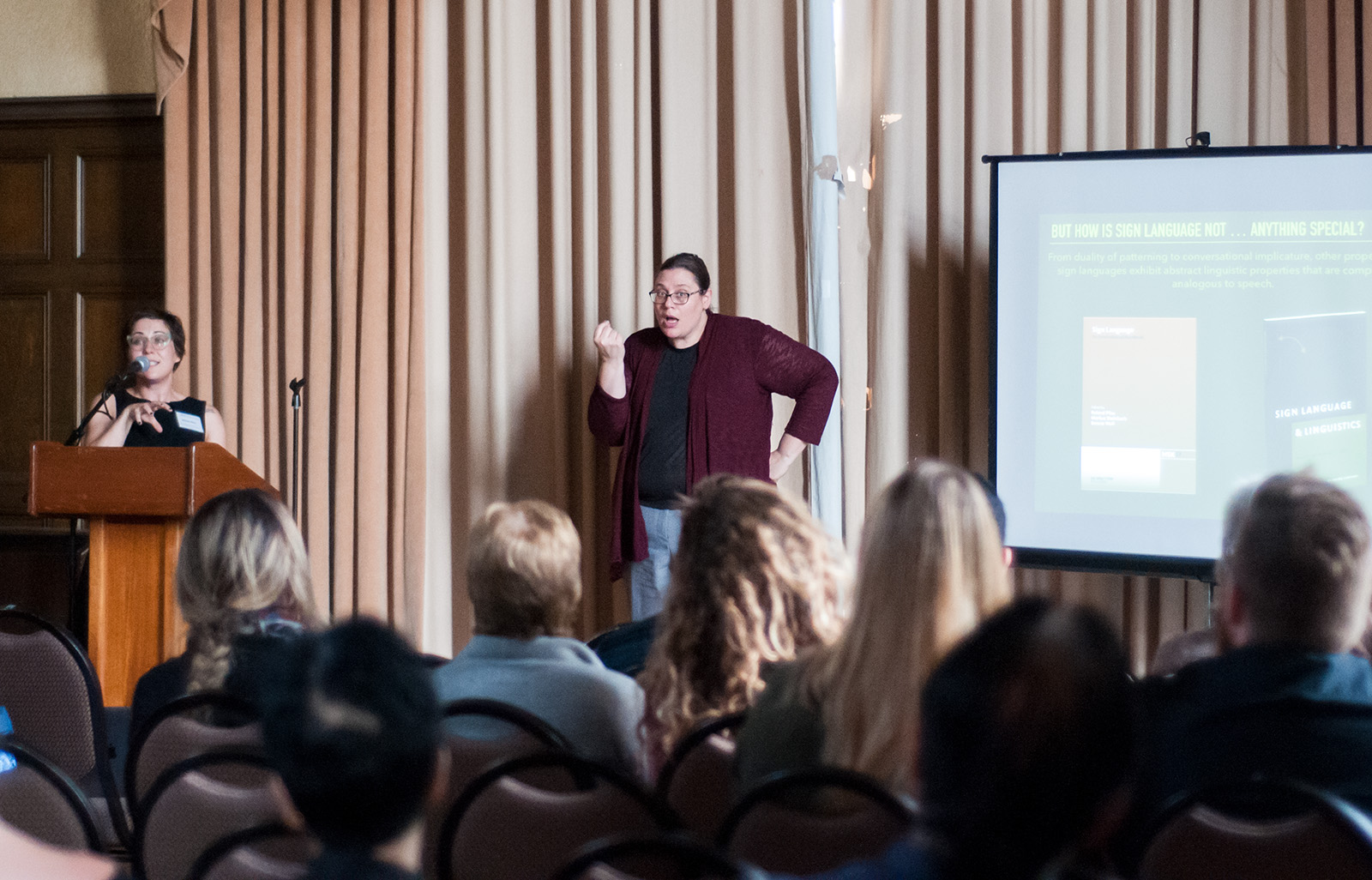 Benjamin Lewis, a UCLA lecturer, and Natasha Abner, a visiting professor, discussed the intricacies of the deaf community and the importance of sign languages. (Liz Ketcham/Daily Bruin)

A UCLA lecturer signed he believes being deaf is something to take pride in and nothing to be ashamed of.

“Oftentimes we meet people who take pity on us,” signed Benjamin Lewis, a lecturer in the department of linguistics. “So I want to plant a new seed that being deaf is great. It’s nothing to feel sad about.”

Lewis used American Sign Language to discuss the differences between the hearing and deaf communities, as well as how deaf communities vary between countries. Lewis was one of two academics who presented on the oppression that deaf people face and the importance of continuing efforts to integrate the deaf community into the hearing world at an event hosted by the linguistics department Thursday.

Lewis, who is deaf, signed that he learned ASL as a baby born to deaf parents. He attended residential schools for the deaf growing up and developed pride in his deaf identity from an early age.

“Saying I’m proud to be deaf will surprise some people,” he added. “I try to explain it’s just a different experience.”

“I have to remember this is the hearing world,” Lewis signed. “They don’t like touching each other.”

It is important to recognize the trauma and struggles deaf people have endured to appreciate the recognition and rights they have earned so far today, Lewis signed. He added hearing people also need to recognize that deaf people still face a type of oppression known as audism.

Lewis signed sometimes people still do not want to work with him because they think it will be too difficult to communicate.

Natasha Abner, an assistant professor at University of Michigan’s linguistics department, said it is important to combat discrimination against the deaf community. Tailoring education specifically to deaf children is necessary to support the creation and development of sign languages around the world, she said.

Formal, structured sign languages are necessary because home signs, which are developed singularly by a deaf person in a nonsigning environment, are too specific to the individual and are a poor method of communication, she added.

It is important that deaf people have access to the same level of communication that hearing people have because language is an essential part of being human, she added.

“I want the takeaway for you to be ‘Sign language is amazing!’” Abner said. “But also that it’s normal … just as another kind of language.”

Jasmine Chisley, a fourth-year physiological science student, said she came to the event to learn more about the deaf culture that Lewis spoke about during the ASL courses she took with him this past year. She added she thinks it is important for hearing people to learn about the struggles deaf people face.

“There’s a (divide) between the deaf community and hearing community,” Chisley said. “We should see this group as marginalized because they have little visibility and recognition.”

If more hearing people learned ASL and tried to engage in deaf culture, then communication between the two communities would be easier, Chisley added.

“I went from knowing absolutely nothing (about ASL and deaf culture) to being able to have conversations,” Chisley said. “That’s just my experience – that’s just one person.”

Lewis signed he thinks UCLA has been helpful in recognizing what the school could do to meet the needs of deaf students. However, more could be done to integrate the deaf community into the hearing world, he added.

“My dream is to see sign language on this campus everywhere,” Lewis signed. “To go to the coffee shop and be able to use sign language.”