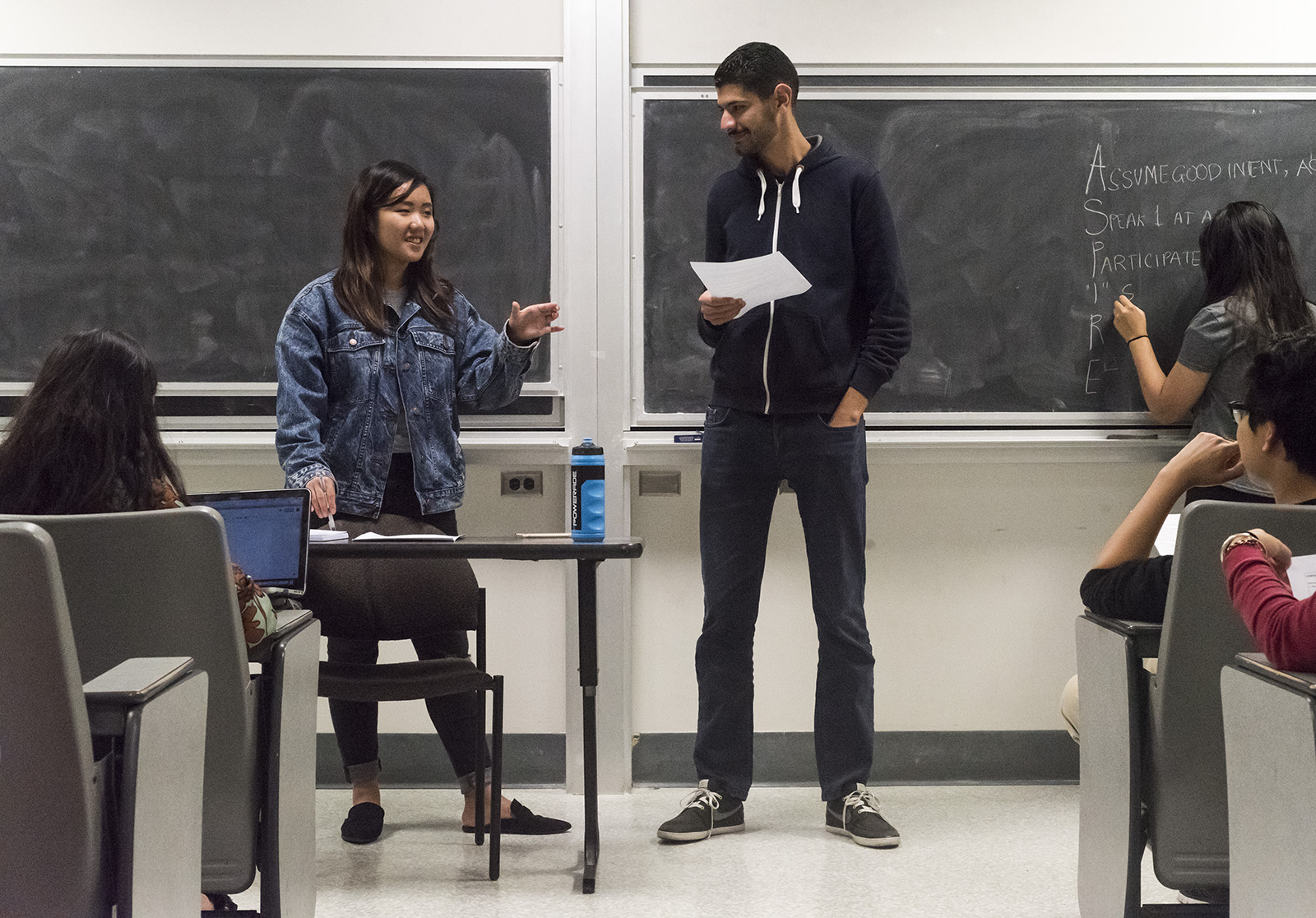 General Representative 2 Kayla He and Ashraf Beshay, a fifth-year biology student and member of He’s office who advocated for the position’s creation, helped lead a town hall to gather feedback on the how to write the bylaws for the new international student representative office. (Quanzhao “Ari” He/Daily Bruin)

The Undergraduate Students Association Council general representative 2 office hosted an international student town hall to gather feedback on how to write the bylaws for the ISR position. The position passed in a referendum during this year’s election, and students will be able to elect the first ISR in next year’s USAC election. The position, which was proposed by General Representative 2 Kayla He, was created to represent the international student community and other non-California resident groups.

Bylaws provide in-depth explanations of the rules and regulations that govern USAC. Changes to the bylaws can be proposed by USAC council members and passed by a two-thirds vote of the council.

He said she hopes including different student group perspectives in events like the town hall will help the council develop bylaws that address different communities’ concerns.

“I really want to make sure that undocumented students’ and out-of-state students’ voices are included because there are a lot of issues (that) are intersectional,” He said. “I really hope that this position can not only serve international students, but also uplift other communities.”

Several students who attended the town hall said they think the ISR should increase visibility for international student issues and resources available to them.

Anjum Farook, a second-year neuroscience student, said she thinks advocacy should be an important component of the new office’s responsibilities.

“Part of (the) nature of (the ISR office) being part of student government means it is advocacy-based,” Farook said. “It is a position where you can advocate for representation and financial well-being, where you can be a voice for students to campus and to Dashew.”

Other students said they were concerned about making sure the new representative ensured that different groups were represented more equitably within the USAC appointment system, especially because the international student community is very diverse.

Ayesha Haleem, a third-year political science and international development studies student who was elected next year’s general representative 1, said she thinks next year’s council will need to further develop the ISR bylaws to make sure they address the needs of out-of-state and undocumented students.

A representative from Improving Dreams, Equality, Access, and Success, a student organization that advocates for the issues of undocumented students, said she thinks the new ISR office can work with the undocumented community by participating in IDEAS training.

“UndocuALLY training for the ISR and their office can help us in advocating for that kind of training,” the IDEAS representative, who did not give her name, said. “It’s about finding where we align and how we can support each other.”

Some students said the ISR should serve as a liaison between students and the Dashew Center for International Students and Scholars to improve resources and programming for international students.

Ashraf Beshay, a fifth-year biology student and member of He’s office who advocated for the position’s creation, said he met with Dashew Center representatives Tuesday to discuss the relationship between the new ISR office and the center.

“We want to make sure we have a positive relationship with all entities mentioned in the bylaws,” Beshay said.

Interim director Sam Nahidi said the UCLA Dashew Center is open to partnering with the new ISR to better engage with international students.

“The Dashew Center remains open to partnership with student leaders, including the new USAC international student representative,” he said. “We support opportunities for international students to engage in leadership experiences and now with a consistent voice in student government.”