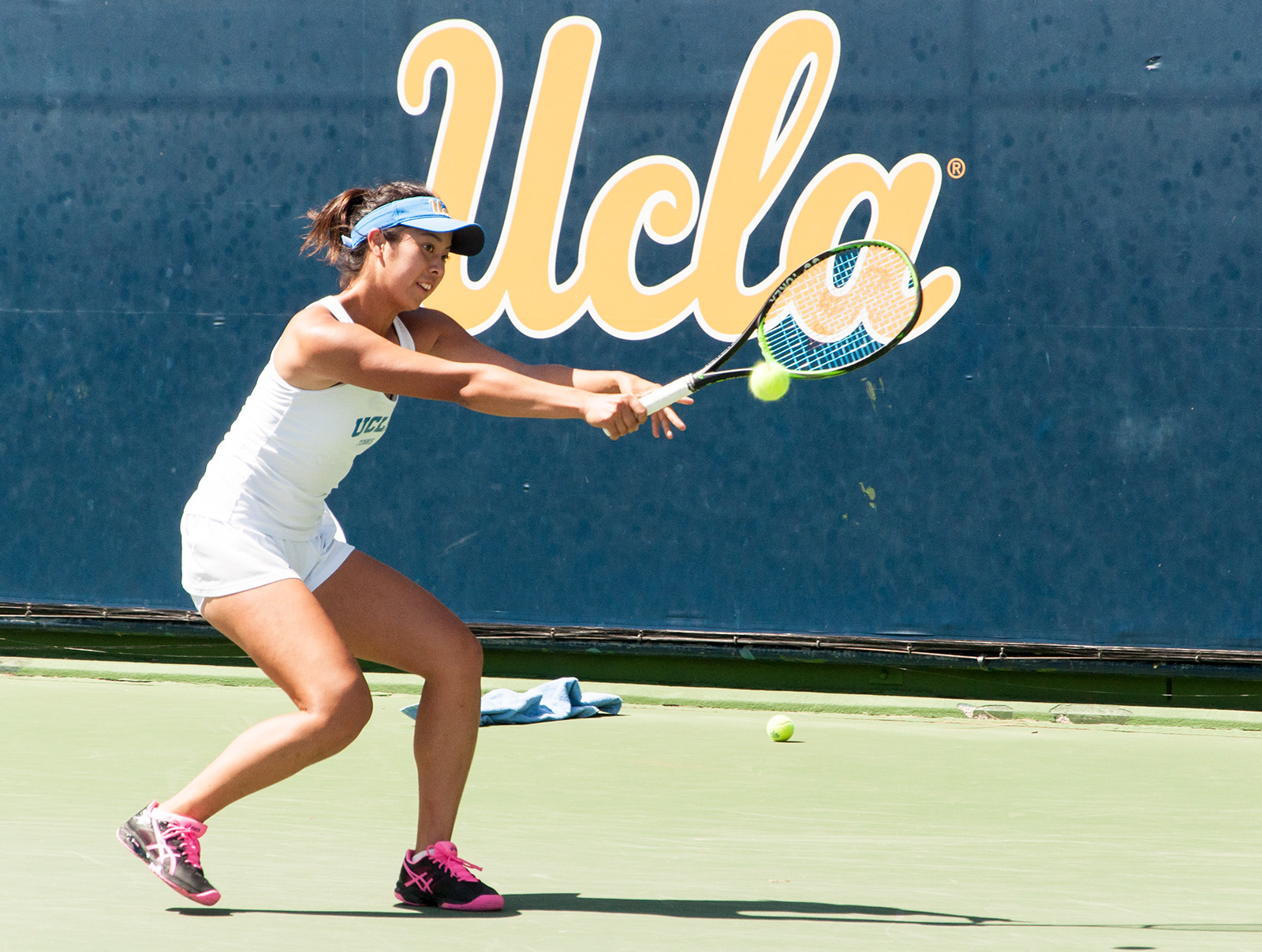 Sophomore Ena Shibahara was named Pac-12 Singles Player of the Year for the 2018 season and earned All-Pac-12 first team honors. With a 25-9 singles record this year, Shibahara was also named the 2018 ITA Player to Watch. (Ken Shin/Daily Bruin staff)

The Bruins fell in the Elite Eight – but reaching that point was a first for many in the lineup.

“We definitely had missed opportunities to make it to the Final Four, which was hard to take,” said coach Stella Sampras Webster. “But, it was great for them to experience this and see what it’s like, because hopefully they’ll want it even more next year.”

“We made it further than most people had expected starting from the beginning of the year,” said No. 33 redshirt sophomore Jada Hart. “Even though it was great to get to the Elite Eight, we wanted more.”

Hart said even though the result was not what the Bruins hoped for, it was a starting point for next season.

“I think with the newcomers and freshmen especially, it’s just an advantage for them that they got to experience going to the Elite Eight – and even for (No. 9 sophomore Ena Shibahara) and I,” Hart said. “This is a run to build on and hopefully we can make a further run next year.”

Shibahara said the experience was particularly important for No. 67 freshman Abi Altick, whose singles loss in the Elite Eight decided the match in favor of Georgia Tech.

“I think (Altick) will learn from it and it was a great experience for her, so that next year if the same thing happens she’ll be able to handle it even better,” Shibahara said.

Much of the Bruins’ talent is in their young athletes, as they are only graduating two players in seniors Terri Fleming and Kristin Wiley. The trio of underclassmen combined for a 46-17 singles record in dual matches, while the four upperclassmen who rotated in the lineup totaled 38-18.

“Since we have a lot of returners, I think we’ll have more confidence going into the tournament next season,” Shibahara said.

Among the underclassmen are sophomores Shibahara and Hart, who play on courts one and two, respectively. Against nationally ranked opponents, Shibahara is 15-6 and Hart is 10-6.

The Bruins also boast the No. 16 incoming freshman class, according to the Tennis Recruiting Network. One of the new players is Elysia Bolton, the number one overall recruit.

“We’re getting two great freshmen and we’re going to have a lot of depth,” Sampras Webster said. “I think we’ll have great leaders in (Hart) and (Shibahara) being juniors. … That’s a big year for us. “

Hart said while she was content with the team’s effort, she will resume training this summer with a new motivation.

“I think we’re definitely hungrier for more than just the Elite Eight,” Hart said. “We’re hoping for a much different result next year – but it was a good season overall.”