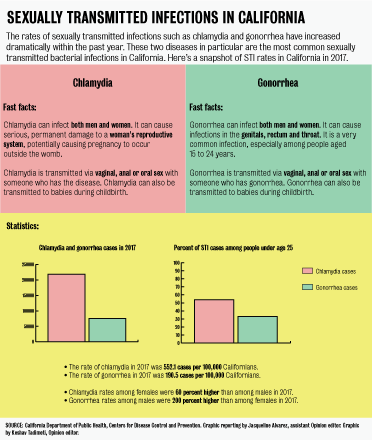 America has seen lots of changes in the past year. The rate of sexually transmitted infections nearly doubling wasn’t one we were expecting.

STI rates have been quite low in previous years because of the introduction of antibiotics, regular screenings and even education – rates fell 75 percent from 1975 to 1997. Recently though, there’s been an alarming reversal of the trend, particularly in California, where STI numbers are some of the highest in the nation.

The number of chlamydia cases rose in 2017 to their highest since 1987, with a reported 552.1 cases per 100,000 Californians, according to the California Department of Public Health. Syphilus and gonorrhea also hit record-high numbers in 2017 for the third year in a row.

LA County officials estimate that there is a clear correlation between STI levels and socio-economic factors, indicating increased vulnerability in historically marginalized communities, such as African-American women and LGBTQ men.

In response, LA County has recently put together theCenter for Health Equity to address systemic issues of racism and stigma that might be contributing to the rise of or hurting efforts to curtail the spread of STIs. It’s unclear what specific programs the center will try to implement, though.

Community groups have also stepped up to the plate and tried to fill in where the state government’s efforts have failed. Groups like We Can Stop STDs LA have been coordinating youth outreach programs to educate Angelenos about sexual health.

But STI numbers continue to go up, and community efforts can only do so much with limited resources and access.

Education may be a good way to make communities aware of how to protect their health, but it doesn’t provide the crucial resources, such as screenings and vaccinations, that help keep these numbers down. California STI rates have clearly not been responsive to the state’s new requirement for comprehensive sexual education in 2016.

And this lack of resources is exactly what’s causing the rise. Jeffrey Klausner, a professor at the UCLA Fielding School of Public Health, said the rise in STI rates is due in part to the decrease in available public health facilities available to underserved communities. Over the past decade or so, funding for smaller clinics has fallen, resulting in many marginalized communities losing out on certain health care facilities.

“You need to make screening services routinely available. In places where you have no or limited access, that’s where you have the highest rates of infection,” Klausner said. “It requires an investment and a creation of new resources.”

Until California establishes adequate access to screenings and vaccines, it will be very difficult to stop the rise in STI rates. Those sorts of interventions can’t be offered without ample state funding – money that state health officials and advocates will need to pressure politicians into allocating, Klausner said.

While education lays the groundwork for change and gives people an important foundation to approaching sexual health, generalized access to care is what would actually help bring these rates down. Recent progress in technology, like smaller home-test kits, has made filling health care gaps left behind by decreases in public health spending more feasible.

Resources such as these smaller, home-test kits would be easy to distribute to places like nurses’ offices in public high schools, Klausner said. Vaccines might also be able to make a difference if they were more broadly utilized. Klausner proposed that, for example, requiring students get vaccinated for the human papillomavirus could help with lowering the spread of STIs.

Though some health experts have proposed that dating apps like Tinder might act as a catalyst in the spread of STIs, that isn’t the case – people aren’t engaging with more sexual partners than they were previously. While some have conjectured that increase in sexual activity might give individuals less incentive to share information about their sexual health, dating apps wouldn’t be a problem if we had the appropriate screening options and vaccinations available in the first place.

Whatever the cause of higher STI rates, California needs to generate some solutions. This task will require more creativity than letting nonprofits and organizers try to fill the gaps left behind by failed government initiatives. Instead, California should be a state where public health leaders are putting pressure on politicians to make a change, not making community members do the government’s work themselves.

Californians can’t sit back and wait for numbers to reach even more alarming heights.

After all, some disease is contagious, and a hands-off approach isn’t going to work.