After weekend of ups and downs, softball moves on to sixth straight super regional 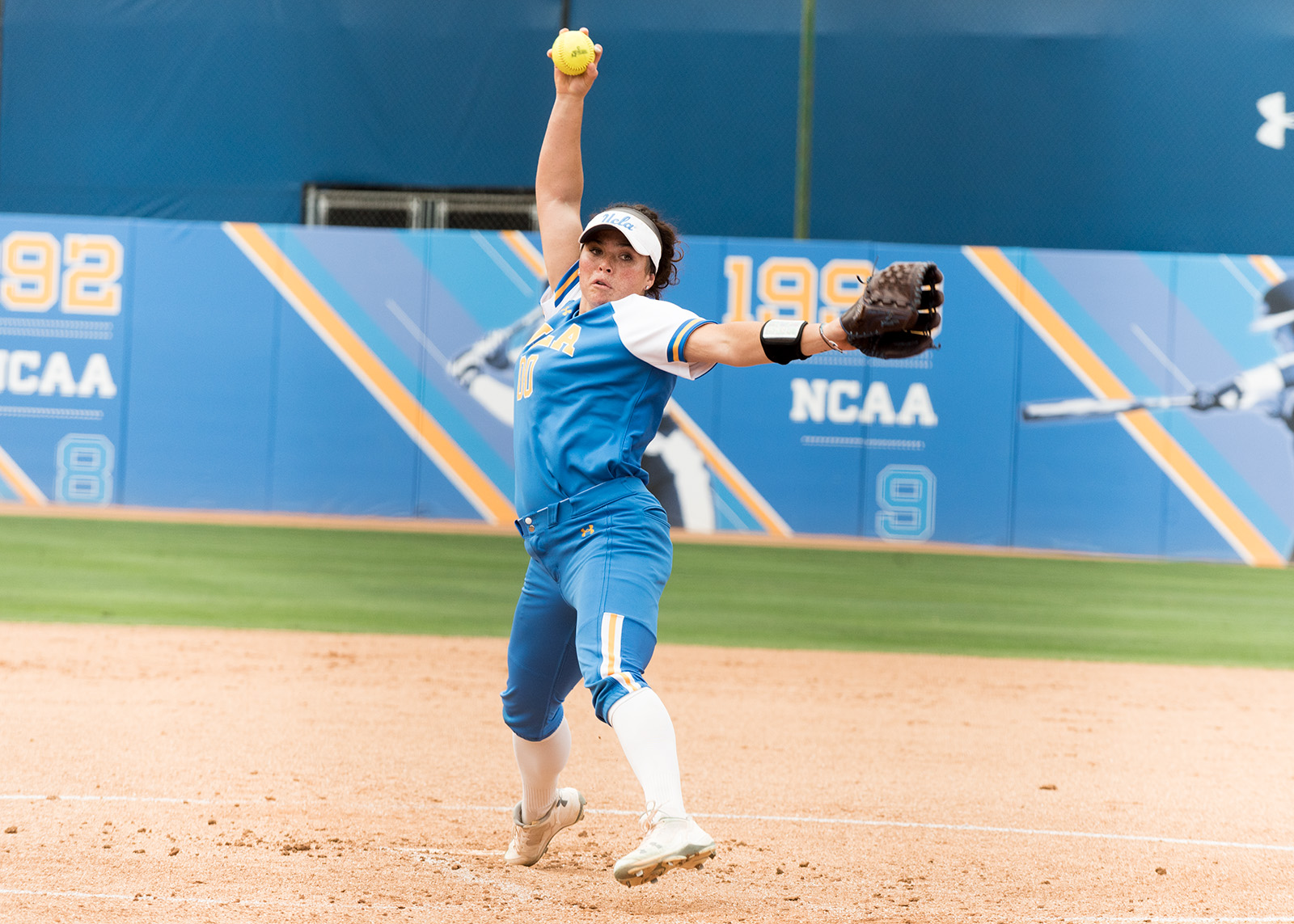 UCLA played three consecutive games knowing if they lost any one of them their season would come to an end.

After losing to Cal State Fullerton on Saturday afternoon, UCLA won three games in two days to advance to the Super Regional for the sixth consecutive season.

UCLA rode the arm of redshirt sophomore Rachel Garcia throughout the weekend as she pitched all but four innings for the Bruins.

“It’s postseason,” said coach Kelly Inouye-Perez. “(Garcia) has prepared for this, we changed our game plan to use more off-speed so she wouldn’t have to use her fast stuff all the time.”

Garcia pitched in all five of UCLA’s regional games in a span of three days, including the regional finale after pitching a complete game in 3-0 Bruins victory 30 minutes before.

“She’s a beast,” Inouye-Perez said. “I told her how far are you going to go for the team and she said until the very end.”

After all was said and done, Garcia threw a total of 30 1/3 innings, giving up 15 hits, walking 10, striking out 37 while allowing just 3 earned runs.

But while Garcia’s arm kept the Bruins from elimination, it was her swing that sent UCLA into the super regionals.

In a game that saw the lead change hands twice, Garcia came up to bat with two runners on and a 3-2 lead in the bottom of the fifth.

The dual-threat player followed a double and a pair of singles with a towering 3-run blast that sent Cal State Fullerton back to Orange County.

“I went up to (sophomore center fielder) Bubba (Nickles) and I told her I’m getting that inside pitch,” Garcia said. “Slowly I was backing off the plate every at-bat. As soon as it hit the bat I was immediately fired up.”

The pitch was indeed inside and Garcia got all of it, shattering the softball and the Titans upset bid.

The Bruins began the regional in the winner’s bracket after defeating Sacramento State (31-20) 3-0 on Friday. Garcia tossed a complete game shutout, striking out 14 and taking a no-hitter into the seventh with one out before shortstop Sydney Rasmussen doubled to give Hornets their only hit of the night.

Offensively, UCLA struggled to up until the fifth inning before three consecutive singles by freshmen left fielder Kinsley Washington, senior second baseman Kylee Perez and junior pinch hitter Taylor Pack scored 3 runs for the Bruins, which was more than enough offense for Garcia.

The Bruins moved on to meet Cal State Fullerton on Saturday afternoon, a team that gave UCLA a hard fought battle in the regular season.

To the surprise of those in attendance, CSUF was able to pull off the upset, winning the game in extra innings in a pitching battle between Garcia and Trish Parks.

Parks threw all nine innings and managed to escape situations with runners on base. UCLA struggled to manage multiple hits throughout each inning doing so just once all game.

The Bruins missed an opportunity to take the lead in the top of the sixth after tying the score at 2. With the bases loaded and two outs, senior second baseman Kylee Perez struck out swinging to end the inning.

In the ninth, with a runner in scoring position, senior first baseman Madeline Jelenicki, grounded out to shortstop to end the inning.

The Titans responded by loading up the bases and Shianne Brannan hit a laser directly to Brianna Perez who was unable to handle the ball as the third base runner scored the game-winning run.

The Bruins scored two quick ones in the first, while redshirt freshman Aaliyah Jordan and Nickles homered in the third in a game in which eight Bruin batters drove in a run.

“I focus on having a game play every at-bat,” Nickles said. “I try to be aggressive but to be honest when you’re up to bat everything just goes blank.”

UCLA’s 14 runs scored Saturday night were more than the team had scored in the previous five games combined.

The Bruins once again moved on into Sunday needing to win two against the Titans.

In the top of the fourth back-to-back singles by Jordan and Garcia set things up for Nickles who hit what would be a game-winning 2-run double.

UCLA added a run in the fifth as Garia controlled the rest of the game, allowing just one base hit in her second complete game shutout of the weekend.

The Bruins move on to the Super Regional where they’ll host Arizona starting Thursday in a best-of-three series for the right to go to the College World Series.