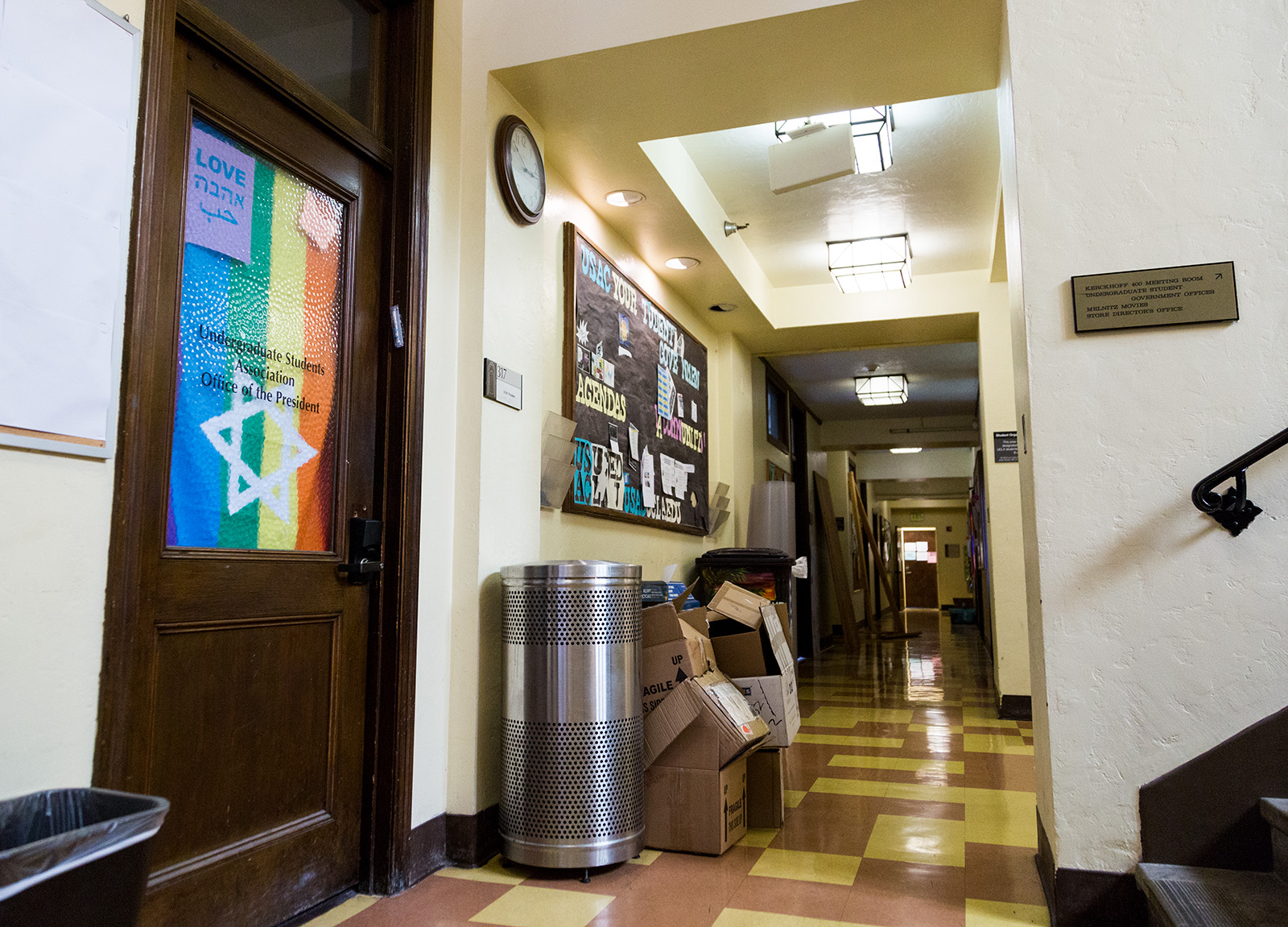 Kerckhoff Hall has a history of vandalism and thefts. Student leaders have been talking about adding cameras to the third floor of the building – a much-needed addition.
(Amy Dixon/Assistant Photo editor)

Fear no more, cameras are on their way.

On their way to Kerckhoff Hall, at least.

The Undergraduate Students Association Council discussed the installation of cameras on the third and fourth floors of Kerckhoff Hall on May 8. The conversation was spurred on by the recent etching of a homophobic slur into the office door of the Academic Affairs Commission.

The council plans to continue the conversation and vote in its upcoming Tuesday meeting on whether to install cameras, said Zahra Hajee, USAC Facilities commissioner.

This isn’t the first instance of a hate crime in the hallways of Kerckhoff Hall, however. A pride flag hanging on the door outside AAC was stolen earlier this quarter. Over winter break, a mezuzah, a religious item often found on the doorframe of Jewish homes and synagogues, was torn from the door of USAC President Arielle Mokhtarzadeh.

Unfortunately, UCPD was unable to identify any suspects in either case. The perpetrators of these acts still walk free from punishment.

Placing cameras throughout Kerckhoff Hall, however, could help UCPD identify perpetrators or, at the very least, gather more evidence. While cameras can be seen as an invasion of students’ and visitors’ privacy, Associated Students UCLA should install security cameras in light of repeated vandalisms and bouts of discrimination in Kerckhoff Hall.

Security cameras can change the game of investigations.

Hajee said the way in which UCPD conducts investigations will be significantly different with the installation of security cameras. UCPD often reaches dead ends when investigating hate crimes or theft due to lack of evidence. Security camera footage can provide police with sensory details regarding those who are responsible for these instances in Kerckhoff Hall, thereby better ensuring students’ safety.

There’s been a need for security cameras for several years. Vandalism has been a prevalent crime in Kerckhoff Hall, as seen in 2012, when racial and sexist slurs were found on a Vietnamese Student Union sign. Council members discussed earlier this month how USAC has repeatedly seen instances of vandalism in Kerckhoff Hall, be that of their office doors or their bulletin boards.

Roy Champawat, ASUCLA Student Union director, told the council that previous student governments settled for putting up signs on the third and fourth floors of Kerckhoff Hall labeling the spaces as being for students, faculty and staff only.

Clearly, those signs haven’t solved the problem, though.

Cameras, on the other hand, will deter these instances from happening in the first place. Cameras give the notion that it is easier to catch and punish perpetrators for crimes they commit.

“Security cameras are (there) to ensure that these things stop happening,” Hajee said.

Hajee added that there have been other incidents outside of hate crimes that warrant the installation of cameras.

Jason Zu, a first-year global studies student, said he supports the idea of security cameras. His laptop, which he left in the external vice president’s office, was taken in March during the University of California Board of Regents’ visit.

“The fact that there are cameras will make people think (twice) if they’re planning to steal,” he said. “It’s more like a preventative measure and if they still go through and commit the crime, they can be caught quickly.”

But while cameras can make a huge contribution to crime fighting in Kerckhoff Hall, they might seem to pose a threat to people’s privacy. However, the location of cameras is still up in the air. As of now, Hajee said the cameras might be placed only in the entrance and exits of the building because students wouldn’t have a problem with that, according to data compiled by a focus group in the USAC Office Space Allocation Committee.

“People are generally okay with installing the cameras but not with (the cameras) being on them all the time,” she said.

And security cameras wouldn’t have to monitor students’ every move. Bruins won’t be followed down corridors through a computer screen every second of the day.

Champawat told the council earlier this month that access to the security camera footage would be restricted to UCPD and ASUCLA’s Security and Loss Prevention Department. And university personnel would only go through camera footage if there was an investigation that called for it.

It also wouldn’t cost anything from students to install cameras. ASUCLA would bear the cost of purchase, installation and upkeep of any cameras, Champawat said.

And, while nothing is guaranteed, installing cameras can play a significant role in improving the campus environment overall. After all, students should be able to have more faith in their security and in the safety of their belongings when they’re in the hub of student life.