WWNC history marked by debate over proper representation of community 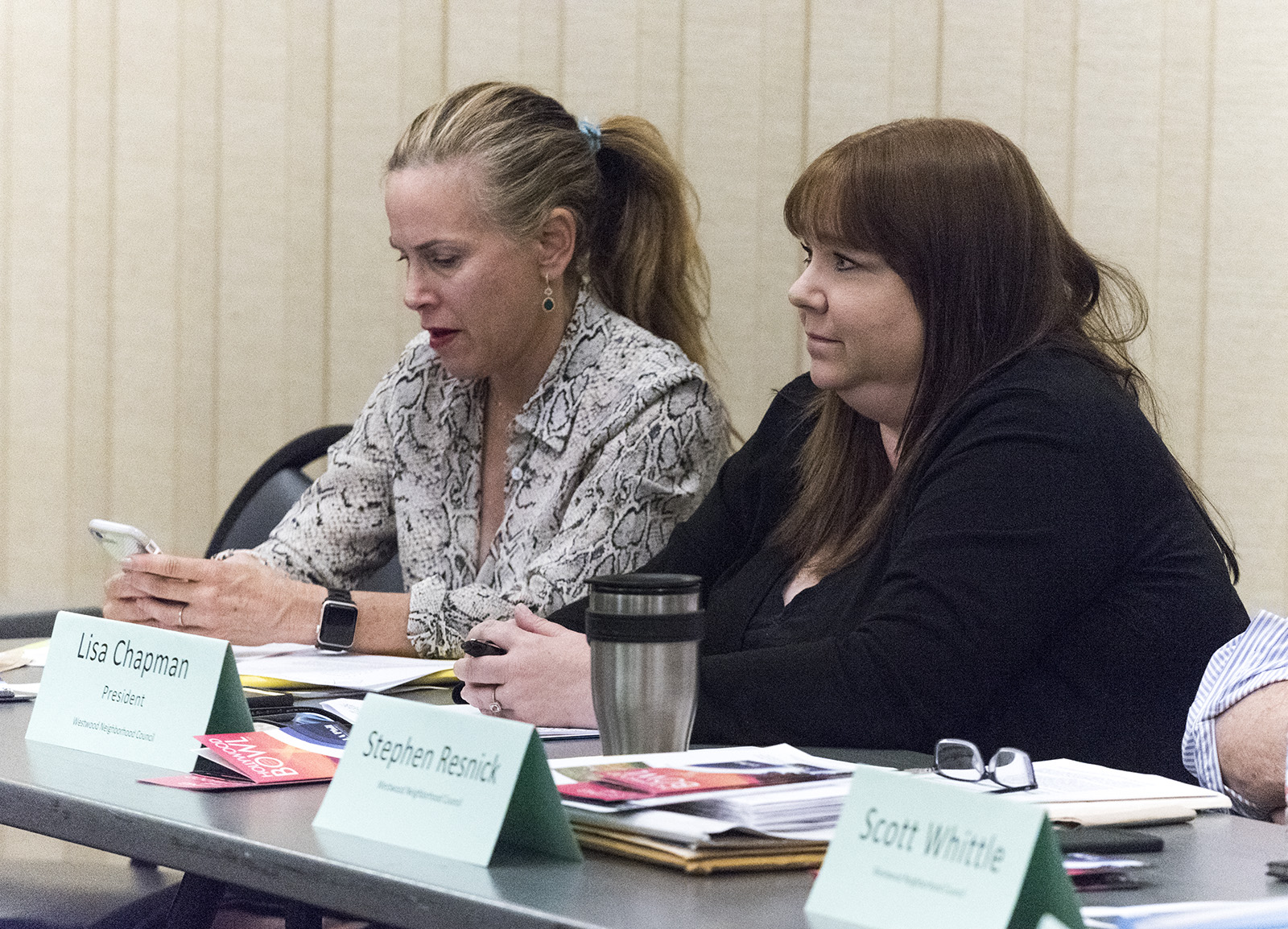 Laura Winikow and Lisa Chapman listen to public comment during a Westwood Neighborhood Council meeting. Those advocating for the creation of the council in 2009 faced similar road blocks to members of Westwood Forward. (Amy Dixon/Assistant Photo editor)

Margaret Jacob had to find a gavel at a town hall meeting to calm down the crowd after it got out of control.

The meeting was held to decide on the creation of the Westwood Neighborhood Council in 2010. The proposal to create another intermediary between Westwood community members and the city faced a lot of opposition from homeowners, said Jacob, a distinguished professor of history at UCLA and one of the founders of WWNC.

WWNC, which advises the city council on Westwood matters, was founded to provide a voice for students, renters and businesses, Jacob said.

The council had to gather petitions, hold multiple town hall meetings and get certified by the Department of Neighborhood Empowerment, a process that began almost a year before the first election to form the council. Along the way, they were constantly opposed by homeowners associations, which did not want to lose control of the Westwood area, Jacob said.

Jacob said she helped found the council because at the time, Westwood was one of the few areas in Los Angeles without a neighborhood council.

The only organizations in Westwood were homeowners associations, such as Westwood Hills Property Owners Association and Westwood Homeowners Association, which opposed the formation of the new council because they felt it would dilute control over the neighborhood away from homeowners, Jacob said. She added many advocates for the neighborhood council also felt the homeowners associations curbed the growth of Westwood Village, a historical area that has long served as UCLA’s college town.

“We wanted a voice for the whole Village,” she said. “We were supported by UCLA and the business community.”

There are currently 96 neighborhood councils across Los Angeles.

The council had to gather petitions from students and other constituents, going through lecture halls and offering the petition in multiple languages to reach out to as many people as possible in the community. They also gained approval from the Board of Neighborhood Commissioners and the Department of Neighborhood Empowerment, both of which oversee neighborhood councils in Los Angeles.

Despite opposition from homeowners associations, the city approved the new council in January 2010, and the council held its first election in June of the same year.

Once the council was approved, however, a slate funded by the homeowners associations formed to run for the election, said Juan Matute, an associate director for the UCLA Lewis Center, who ran for the original election on a slate of UCLA urban planning students and alumni called Westwood Bruins.

“A lot of people didn’t want to give their power up, so they opposed the formation,” Matute said. “Once the council was approved, their thinking was, ‘If we can’t beat them, join them,’ and many of them won.”

Sandy Brown, current vice president of WWNC and president of Holmby Westwood Property Owners Association, said although homeowners did not want a new council, they felt obligated to run for seats to represent the residential community.

Homeowners felt a neighborhood council was unnecessary, Brown said, because existing associations and other community groups, such as the Westwood Village Improvement Association, were already able to represent the community.

“Everyone was able to explore their issues through their own associations,” she said. “But somebody has to sit on that council representing homeowners.”

Scott Whittle, who represented the WHPOA, told the Daily Bruin after winning a seat on the council during the 2010 election that he initially fought against the council’s creation.

“If we’re going to have (a neighborhood council) we better roll up our sleeves and manage it,” he said. “We can’t just play ostrich and pretend it doesn’t exist.”

Jacob said she thinks the council no longer represented Westwood after that first election because it went against the interests of students and businesses by opposing nightlife, parking and new businesses in the village.

“The council doesn’t represent the needs and interests of the larger community,” she said. “We need change.”

Roxane Stern, a homeowner who advocated for the council’s formation, said she thinks the council has failed in its efforts to better represent the Westwood community.

“We really cared about the community, we really tried to make a change. Most gave up after the first election, though,” Stern said. “Most felt it would never get any better.”

Stern is now a member of Westwood Forward, a coalition of students, business owners and homeowners that submitted an application to subdivide WWNC in December. The subdivision process, approved by the city in 2016, allows sections of existing neighborhood councils to break away and form their own councils.

The proposed North Westwood Neighborhood Council would consist of UCLA’s campus, the North Village and Westwood Village. City rules required Westwood Forward to first submit an application to create a new council and then hold a special election to allow stakeholders in the current council’s boundaries to decide whether a new council should be created.

Stakeholders include members of the community who live, work or otherwise have a personal association within WWNC’s boundaries.

Graduate Students Association President Michael Skiles, one of the organizers of the coalition, said he thinks the current WWNC is not representative of most of its constituents and has opposed student interests.

“The council has done a lot to hinder nightlife, business revitalization, housing development, bike lanes, and has stood in the way of changes our stakeholders would like to see,” he said. “That’s why we’re pushing to change it.”

So far, the coalition has faced a few of its own hurdles.

In February, the Department of Neighborhood Empowerment asked Westwood Forward to include an additional region northwest of its proposed boundaries, which contains the WHPOA.

“We would rather be allied with the traditional Westwood neighborhood,” Magnuson said. “We have a voice on this council – we would have none on their council.”

WWNC later made a motion to incorporate the Los Angeles National Cemetery so the WHPOA could remain within its boundaries. The city requires all subdividing neighborhood councils to be contiguous – without the inclusion of the cemetery, WWNC would have one area within its borders connected to the rest of its boundaries by a single road.

However, WWNC also requested that the city designate Westwood Village as a shareable resource so it could still have a stake in its politics should NWWNC also be formed.

The city advised against the motion, but it remains to be seen whether it will ultimately accept the change.

“Before, we depended too much on what already existed. Our alcohol conditions were too hard, businesses felt like their rights were being trampled upon,” Chapman said. “But we differ from other groups by following rules and being cognizant of who is already in the Village.”

She added she wishes members of the Westwood Forward coalition would have run for the current board instead of trying to split away from it.

“Westwood Forward is a scorched-earth approach. Why didn’t they gather their resources and run for the current board?” she said. “It’s a little puzzling.”

Skiles said he thinks Westwood Forward will succeed in its plans to better represent the community after the election because it has much more support from stakeholders, including student leaders and the WVIA, than the original council did when it was formed in 2010.

He added he thinks the individuals who advocated for WWNC’s creation focused too much on the council’s formation and not enough on what it would do after it was created.

“We’re not going to take the election as victory, but as the first step,” Skiles said. “We’re going to learn from the last council’s mistake of assuming that inclusivity is going to happen just by having a council, but we have to encourage future generations that this is a right they have to fight and defend.”