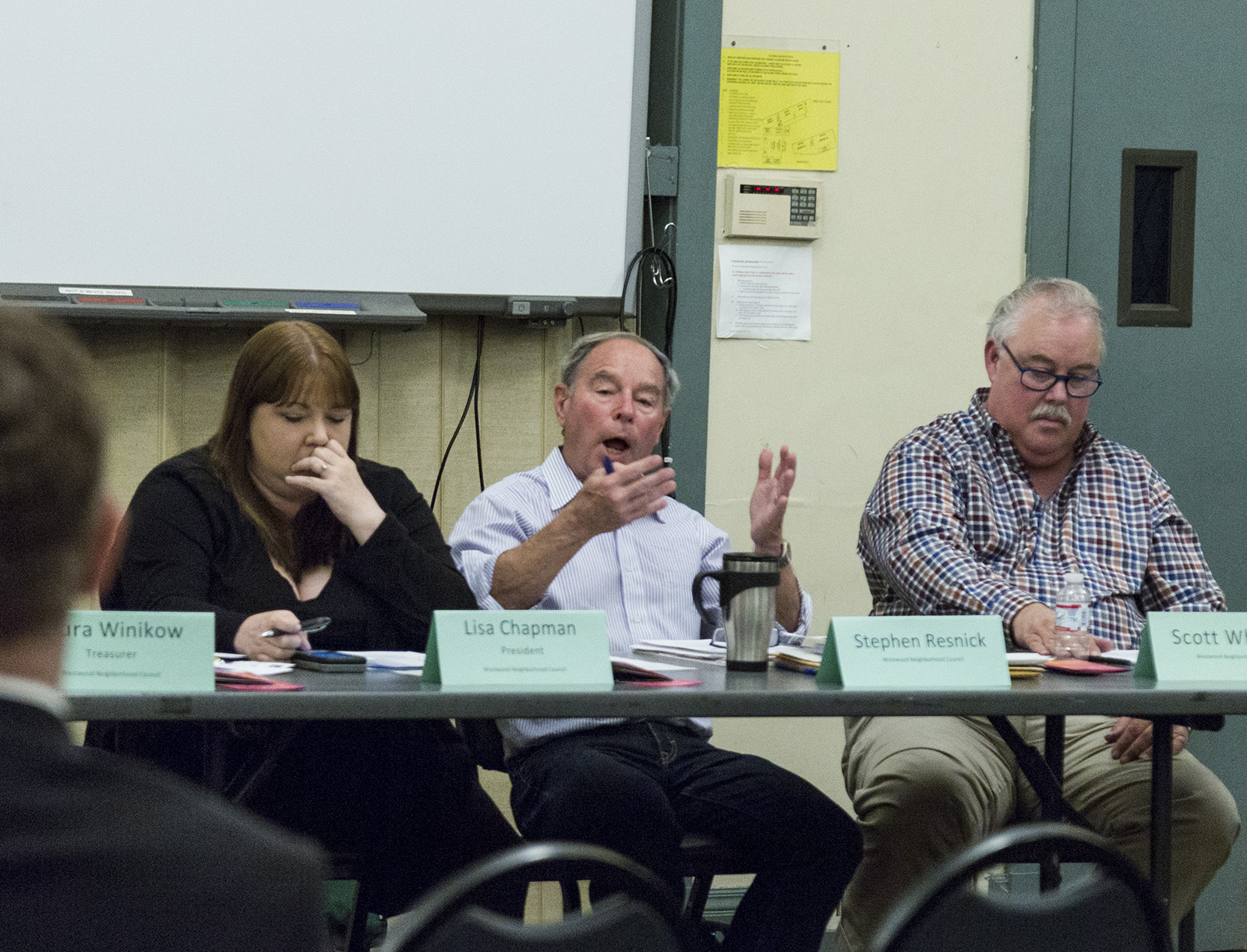 Lisa Chapman, Stephen Resnick and Scott Whittle (left to right), members of the Westwood Neighborhood Council, voiced their frustration toward members of the Department of Neighborhood Empowerment. The council issued a vote of no confidence against the department at its Wednesday meeting for its lack of transparency. (Kristie-Valerie Hoang/Assistant Photo editor)

The Westwood Neighborhood Council issued Wednesday a vote of no confidence against the Los Angeles department that oversees neighborhood councils.

The council passed the motion against the Department of Neighborhood Empowerment, which supervises all 96 neighborhood councils in Los Angeles, during its May meeting. Although the vote will not have any policy impact on the neighborhood council or the city organization, council members said they intended to send a public message of dissatisfaction with the department.

WWNC’s vote follows a number of disagreements it has had with the department over proposed boundary divisions that will occur if Westwood residents vote to move forward with the creation of a new neighborhood council May 22.

Westwood Forward, a coalition of students and Westwood community members, submitted an application to subdivide WWNC in December because they felt the current council did not adequately represent students or address their concerns. The department approved the coalition’s application in March.

If passed by voters, the new neighborhood council will encompass the UCLA campus and the immediate surrounding areas, including Westwood Village.

Members of WWNC said they think the department did not properly manage the subdivision process and unfairly favored Westwood Forward. Members also said they were concerned over city policies and the department’s rejection of a proposal to make the Village a shared domain between the proposed council and WWNC if the subdivision vote passes.

WWNC President Lisa Chapman said before the subdivision process was brought to their attention in December, the council and the Department of Neighborhood Empowerment had an amicable working relationship. She said she thinks the council lost trust in the department because of the way it handled the subdivision process, and added she hopes the vote would send the message that they want their concerns to be addressed.

“They’ve clearly sided with Westwood Forward, and you know what? It’s not their role to side with anyone,” she said. “We just want to make a statement that we’re not going to be marginalized anymore by the Department of Neighborhood Empowerment.”

Council members also said they think Mike Fong and Grayce Liu, the Department of Neighborhood Empowerment’s director of policy and government relations and general manager, respectively, did not adequately communicate with the council. The pair, who oversees the council, had been invited to speak but did not attend the meeting.

Sandy Brown, vice president of WWNC, wrote an open letter at the April meeting addressing the Department of Neighborhood Empowerment, the Los Angeles mayor and other city organizations to say the Village should qualify for shared boundaries with both the current council and Westwood Forward’s council if the subdivision process goes through.

At the time, the department’s field representative said the Village would not qualify for shared boundaries, but at the Wednesday meeting council members voted to petition the city for a boundary adjustment if a new council is created.

The current policy says that no area may be shared between councils unless it is for public use. Exceptions include parks, schools, libraries, police and fire stations, areas containing landmarks or facilities with historical significance.

“It is … as vague as vague can be,” Brown said Wednesday.

Gibson Nyambura, the department’s field representative for Westwood, attended the meeting and said Fong and Liu had conflicting schedules that evening. He added that part of his job is to attend meetings and act as an intermediary between the department and neighborhood councils.

“I definitely try to make sure we’re communicating as much as possible from the department,” he said. “That’s why I serve as a field representative.”

Chantelle Eastman, a member of the council also voted in favor of the no confidence vote but said her reasons for doing so was not to voice complaint against any specific employees.

“I’ve actually known (Fong) for many years, and in positive roles. I was really happy to see him engaged in (the department),” she said.

Eastman, a UCLA employee and alumna, said she voted no confidence against the department because she hadn’t received important emails and felt like the organization had failed to effectively communicate some community issues.

“In general, I should be informed so I can inform my community of things. I just like having that communication flow,” she said. “When a question is asked, if you don’t have the answer, that’s fine, but look into it and acknowledge people’s concern.”

During Wednesday’s council meeting, Nyambura fielded questions from multiple members of the board asking why his colleagues did not come to the meeting and why they were not being more transparent.

“I definitely get the frustration,” he said. “I’ve just got to take in your comments.”