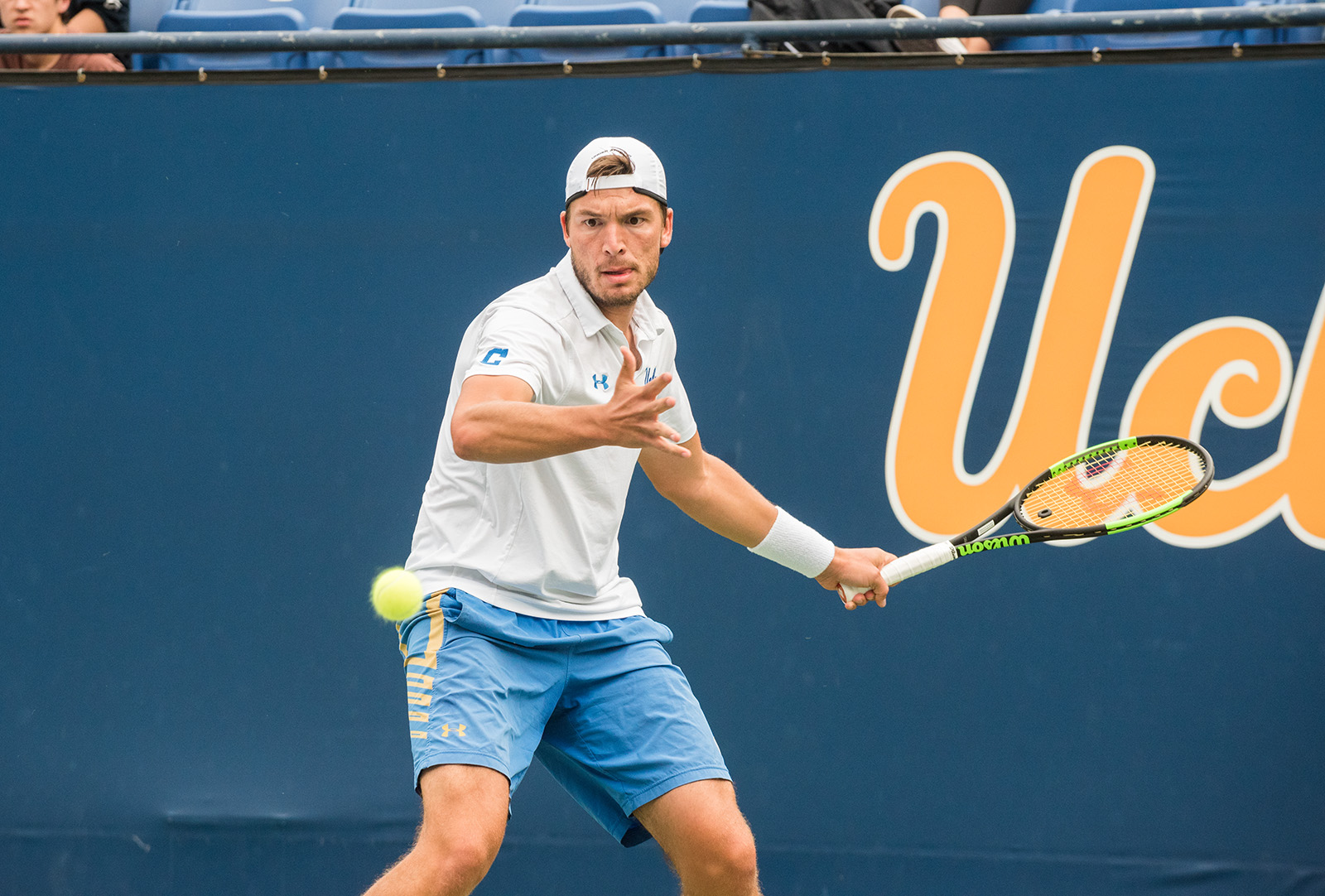 Despite dropping his doubles match with sophomore Evan Zhu, senior Martin Redlicki won his singles match in straight sets to give the Bruins a 2-0 lead. Redlicki now posts a 23-5 singles record on the year. (Pinkie Su/Daily Bruin)

The Bruins are Sweet 16 bound.

“I though they handled the pressure of do-or-die very well,” said coach Billy Martin.

The Bruins fell into an early deficit in doubles. At court one, No. 29 senior Martin Redlicki and sophomore Evan Zhu were swept for the first time this season. The duo had previously won six consecutive dual matches.

“Today was one of those days where our opponents came out completely on fire, and there wasn’t much we could do,” Redlicki said. “We just had to forget about it and move on to singles.”

UCLA’s other nationally ranked pair, No. 16 senior Austin Rapp and freshman Keegan Smith, won 6-2 at court two to even up the score.

The doubles point was left up to court three.

Junior Maxime Cressy and freshman Bryce Pereira won their first doubles set of the NCAA tournament, defeating their opponents 6-3 and giving the Bruins an early 1-0 lead.

“(The win) was pretty exciting, but I try to think of it as just another match,” Pereira said.

No. 1 Redlicki increased the Bruin lead to 2-0, defeating No. 60 August Holmgren in straight sets at court one.

“To go out with a good win against a good player to qualify for NCAAs is nice,” Redlicki said. “But at the end of the day, we know there is a lot of tennis still left to be played.”

Almost immediately after, No. 56 Smith, a native of San Diego, followed with a service ace to earn a victory at court three. He defeated his opponent 6-4, 6-0.

“I think (Keegan) wanted to show them that he made a good decision in coming to UCLA,” Martin said.

At court five, Cressy swept his opponent 6-3, 6-3 to clinch the match point for UCLA.

With the victory, the Bruins are one of 16 teams to advance to Wake Forest, North Carolina, where the NCAA championships will be held from Thursday to May 22.