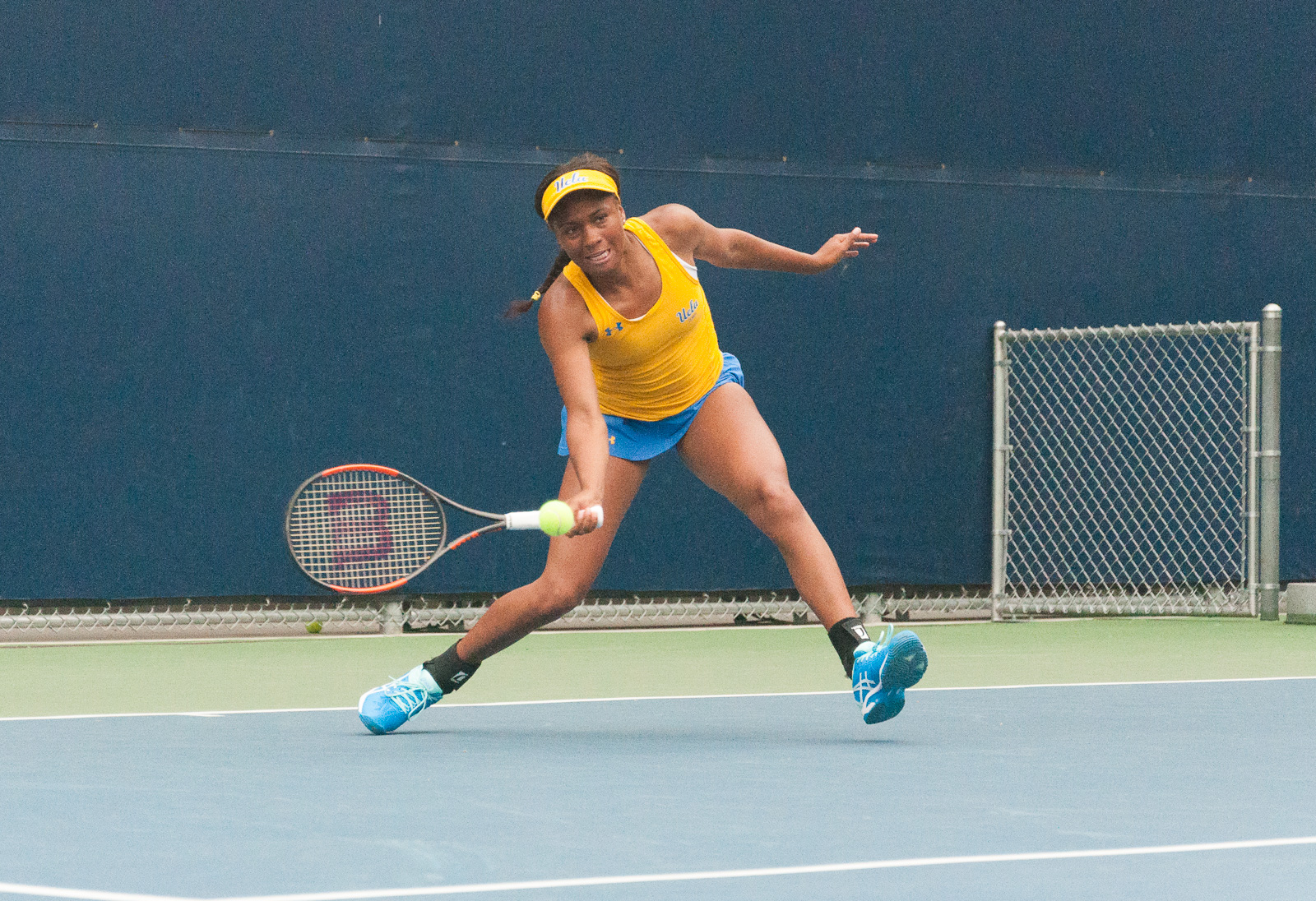 Junior Ayan Broomfield clinched the doubles point for UCLA with junior Gabby Andrews. With a 1-0 lead, the Bruins went on to sweep Baylor and will advance to the Sweet 16 to face the Mississippi Ole Miss. (Niveda Tennety/Daily Bruin)

The Bruins looked to redeem themselves from last year’s second-round loss in the NCAA tournament – and they did just that.

“You always want your players to experience the Sweet 16,” said coach Stella Sampras Webster. “(I’m) really happy for them to have this opportunity to play against top competition.”

All eyes were on court two in doubles after the Bruins and Bears split the games on courts one and three.

UCLA’s No. 64 duo of junior Ayan Broomfield and junior Gabby Andrews outlasted Baylor’s Theresa van Zyl and Jessica Hinojosa 6-4 to clinch the Bruins’ 20th doubles point in their last 22 matches. It was the first time the duo won their doubles set in their last four matches.

“That was a lot of fun,” Broomfield said. “Gabby has been playing some great tennis so I’m just trying to keep up and do my part. She carried us to the doubles win.”

The Bruins headed into singles winning five of the six first sets.

Junior Alaina Miller gave the Bruins their second point with a 6-3, 6-3 win over the Bears’ Angelina Shakhraichuk on court six. The All Pac-12 honorable mention has only lost once in her last 17 matches.

Miller’s doubles partner, No. 9 sophomore Ena Shibahara, put UCLA on the brink of advancement with a 6-3, 6-4 victory over van Zyl on court one. The Pac-12 Singles Player of the Year secured the victory with a lob soaring over her opponent’s head.

“I was super pumped,” Shibahara said. “I had trouble breaking in the second set but I figured it out. I played well when I had to.”

No. 67 freshman Abi Altick finished the whitewash with a matching score line on court four and a domineering cross-court backhand.

UCLA will take on No. 5-seeded Mississippi in the Sweet 16 on Thursday in Winston-Salem North Carolina. The Bruins lost to the Rebels 4-3 earlier in the season at the Intercollegiate Tennis Association Division I National Women’s Team Indoor Championship.