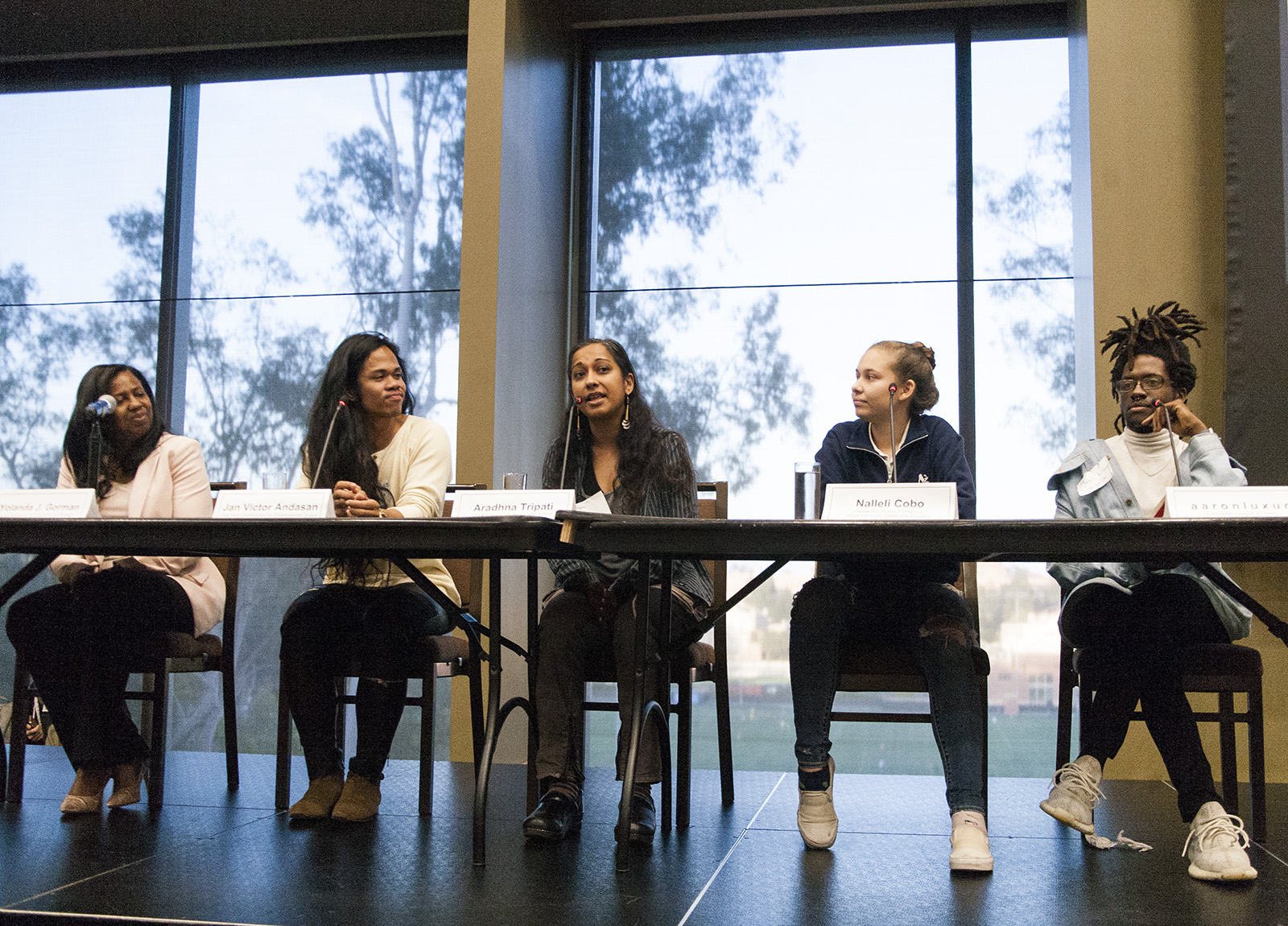 The Environmentalists of Color Collective at UCLA hosted a forum on climate justice at Carnesale Commons which aimed to raise awareness and start a dialogue about environmental racism. (Mia Kayser/Daily Bruin)

Expert panelists said at an event Tuesday that environmental degradation disproportionately affects communities of color, and that promoting racial diversity among environmental science researchers could help address the issue.

The Environmentalists of Color Collective at UCLA hosted a forum on climate justice in Carnesale Commons, featuring a panel of environmental justice advocates from Los Angeles. ECC aimed to raise awareness and start a dialogue about environmental racism, said Liliana Epps, a second-year gender studies student and member of ECC who helped host the event.

“Environmental justice aims to reduce pollution across the board, but mostly in areas that are hit harder – primarily low-income black, brown and indigenous communities who don’t have the political agency to fight back against environmental racism,” Epps said.

Activists at the event talked about their work as environmentalists of color advocating against environmental degradation primarily affecting low-income communities of color.

Felicia Montes, an activist and community organizer who spoke at the event, said she encourages students to continue to hold dialogues on the importance of environmental justice.

“Through sharing our stories, we can educate, empower and transform ourselves and our communities through our truths,” she said.

Nalleli Cobo, an environmental justice advocate and panelist, said she became involved in environmental activism at the age of 9, when she protested the oil drilling near her LA home that caused her long-term breathing problems, including asthma. She responded to the crisis by founding People not Pozos, a campaign to fight against drilling near her neighborhood.

“Five hundred and eighty thousand Angelenos live within three-fourths miles of an oil well,” she said. “(Corporations) can’t just ignore us because we don’t have access to education to learn about our rights.”

Aaron Luxur said that as a person of color and environmental activist, he started Vegan Voices of Color to challenge what he thinks is a whitewashing prevalent in environmental organizations. He said he also challenges the fashion industry by creating sustainable clothing.

“I have found a way to combine my environmental activism with fashion, which is something I have always loved,” he said.

Jan Victor Andasan, a UCLA alumnus, said as a student at UCLA, they worked to better engage underrepresented communities in activism movements. Like the other panelists, Andasan said their community was affected by pollution growing up, and they had to fight to improve living standards.

Aradhna Tripati, an associate professor in the Institute of Environment and Sustainability and the director of the Center for Diverse Leadership in Science at UCLA, said she thinks student activism and scientists of color are important in contributing to the environmental science field.

Tripati added she thinks not enough people of color are involved in environmental research and that universities should promote diversity in these programs.

Marjan Abubo, a fourth-year history student and member of ECC, said environmental justice campaigns at schools such as UC Berkeley inspired the club at UCLA. He added he wants to see people of color play a more active role in addressing climate change and other environmental issues, because the environmental science field is dominated by white researchers and activists.

“In order to move forward inclusively and equitably, we need to put these people of color at the forefront of events and conversations,” Abubo said.

For example, he said UC Berkeley has hired more professors of color within the environmental science department and added he hopes UCLA will make similar changes.