Throwback Thursday: Thirty years ago, the Hill wasn’t so stringent on alcohol 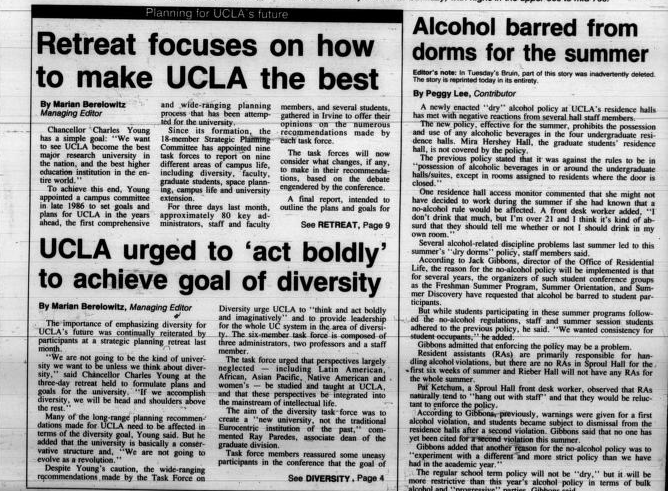 The Daily Bruin published a news story in 1988 detailing the ban of alcohol on the Hill for the summer. (Daily Bruin archives)

Some Bruins know what it’s like to hide their alcoholic drinks before the dreaded “room check” every quarter.

On-campus housing regulations prohibit the consumption and distribution of alcohol on the Hill, so to ensure they aren’t caught, students take shady measures in order to have fun in the comfort of their own dorm rooms.

This, however, was not always the case for UCLA residents.

On July 7, 1988, the Daily Bruin published a news story announcing a new policy that would ban alcohol at the dorms for the summer. Before this new policy, residents were allowed to possess alcoholic beverages on the Hill as long as they kept it in their assigned rooms, with the door closed.

The change in policy was met with negative reactions, of course.

One resident said she would have not agreed to work on the Hill over the summer if she knew about the new policy beforehand.

“I don’t drink that much, but I’m over 21 and I think it’s kind of absurd that they are telling me whether or not I should drink in my own room,” she said.

Alcohol-related problems during previous summer of 1987 led to the “dry” policy change.

Pat Ketchum, a former Sproul Hall front desk worker, said he personally knew resident assistants who were reluctant to enforce the policy because they socialized with those who drank on the Hill.

Gibbons told The Bruin enforcing the dry policy would be a problem because of this.

But 30 years later, it’s not as bad as Gibbons likely imagined the alcohol-free Hill would be. Resident assistants and Hill staff aren’t hesitant to enforce the dry policy.

Despite policies prohibiting it year-round, nothing is stopping students from sneaking alcohol into the dorms. Just visit their rooms when it’s not time for dorm inspections.