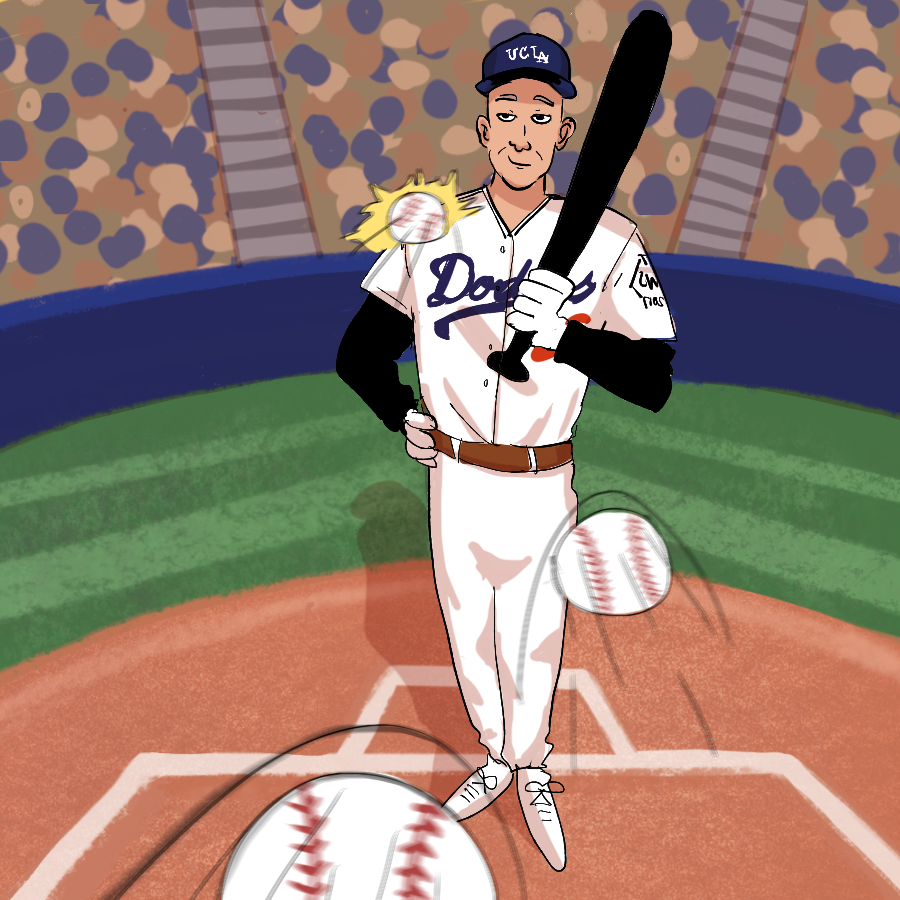 Chase Utley recently got some attention for getting hit by pitches.

The former Bruin and current Los Angeles Dodgers second baseman was struck by the 200th pitch of his career April 17 in a game against the San Diego Padres. That’s good for No. 8 on the all-time list.

“For me, it’s about trying to win baseball games in a number of different ways,” Utley said. “I know some guys wear elbow guards or wrist guards, … but any time you get on base, especially when you’re down in the count with a couple strikes, you’ve got to be pretty happy with it.”

When a pitch hits a batter, the ball is declared dead and the batter is automatically awarded first base – a painful way for a hitter to accomplish his goal. And there’s a chance Utley’s predilection for getting pummeled by pitches began during his time at Jackie Robinson Stadium.

The Dodgers selected Utley out of Long Beach Polytechnic High School in the second round of the 1997 draft, but he chose to attend UCLA instead. He’d be a first-round pick by the Philadelphia Phillies three years later after slashing .342/.401/.620 during his three seasons as a Bruin.

Utley hit the ball at a steady rate in college – never posting an average below .317 – but the rate at which balls hit him followed a much steeper trajectory.

During his freshman year, he didn’t get hit by a pitch. Three pitches struck him as a sophomore. In his last year with the Bruins, he was hit by 10.

UCLA baseball coach John Savage said getting hit by pitches isn’t part of a professional baseball offense. However, the same can’t be said for the college game. In 2018, Pac-12 players are getting plunked about 2.4 times as often per plate appearance as MLB players.

Junior center fielder Daniel Amaral was hit by his 11th pitch of the season Tuesday night, a figure that leads the current UCLA baseball team. Amaral called getting hit a bittersweet experience, but expressed excitement over watching a teammate wear one.

“It for sure fires you up,” Amaral said. “Because, as a teammate, when you see someone get hit by a pitch, it tells you that they’re selfless, they’re willing to take a pitch for their team. … When a whole lineup does that, it’s something special.”

Amaral pointed to factors like having younger, more energetic players with a do-whatever-it-takes-to-win mentality to explain the NCAA phenomenon. Utley, now 39, struggled to say whether or not he would have been hit by pitches at such historic levels had he not played college baseball.

“You don’t know what your mindset or your mentality would be without that college experience,” Utley said. “It’s something that can kind of bring a team together. … Everyone recognizes that it’s not a whole lot of fun to get hit by a pitch, but sometimes you have to sacrifice your body for the better of the team.”

The Dodgers’ annual UCLA Night will take place Friday when the Dodgers take on the Cincinnati Reds at 7:10 p.m. Utley expressed gratitude for UCLA in advance of his third straight UCLA night.

“It’s great. Any time you can show support for your alma mater, I think it’s important,” Utley said. “UCLA was a great learning experience for me. I think it really developed my baseball ability to perform at the pro level. It taught me a lot not only physically, but (also) mentally in how to approach a day.”

A special ticket package that includes a co-branded Dodgers-UCLA, three-quarter-sleeved T-shirt is available exclusively at Dodgers.com/UCLA.