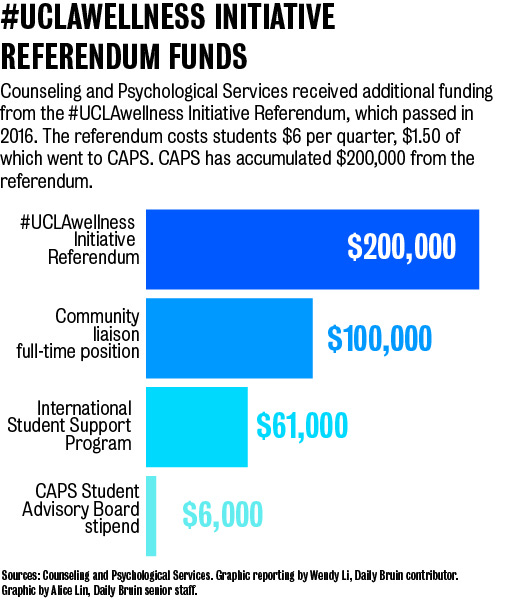 CAPS is using funding from the #UCLAwellness Initiative Referendum to operate the CAPS Student Advisory Board, to run the International Student Support Program and to hire a community liaison who will help students access mental health resources outside CAPS, said Nicole Green, executive director of CAPS.

The #UCLAwellness Initiative Referendum, which student voters passed in the 2016 undergraduate student government election, increased student fees by $6 per quarter. Of that, $1.50 goes to CAPS, and the office has so far accumulated around $200,000 from the referendum.

Green said the funds were first used to form a student advisory board in 2016. The board provides feedback to CAPS on its services and events and acts as a liaison between CAPS and student groups.

CAPS uses the funds to pay $600 annual stipends for each student on the board and hired an intern to help coordinate board meetings and logistics. Green said CAPS created the program after following requests to do so from students.

“The board was created because students wanted innovative programs, not just another therapist,” she said.

Green added the board has helped her office think of creative ways to support students.

For example, the board recommended CAPS connect with peer counseling programs, use social media to reach out to students and help students reach community providers by offering Uber vouchers, Green said.

“These counselors could talk to students on the phone, by Skype or (by) text in their own language,” Green said.

Green said the ISSP is not widely used by international students because it has not been sufficiently marketed. She said the office plans to work with the Dashew Center for International Students and Scholars next year to promote the program and inform students about it during New Student Orientation in the summer.

“The program has gotten more visibility, although it had been a slow start,” she said. “It hasn’t had much impact on international students, but we are going to market it better next year,” she said.

Following a recommendation from the student advisory board, CAPS also plans to use referendum funds to hire a community liaison who would reach out to campus peer programs and off-campus health care providers to provide students with more mental health resources, Green said. Creating this position will cost about $100,000, she added.

“He or she will help CAPS connect to other UCLA programs and expand health options for students beyond CAPS,” Green said.

CAPS will have about $30,000 left from what it has accumulated from the referendum so far, she said. Green added that the office plans to use that funding to create more programs to connect students with mental health resources and pay for next year’s student advisory board.

Students said they think CAPS should conduct more outreach to inform them about the services it provides.

Janice Kufuor-Mensah, a first-year neuroscience student, said she thinks the additional resources CAPS has been providing should not have been funded through higher student fees.

“Why isn’t UCLA paying for this?” she said. “Why are students incurring the costs of mental health services when UCLA has enough money to build another CAPS with all they are spending on sports?”

Christian Macias, a third-year neuroscience student, said he thinks a liaison could help more students learn about CAPS’ resources, but does not think the position needs to be full time.

“There is a lot of programming within CAPS that students aren’t aware of, so I’m optimistic about a position that introduces resources to students and increases outreach,” he said.