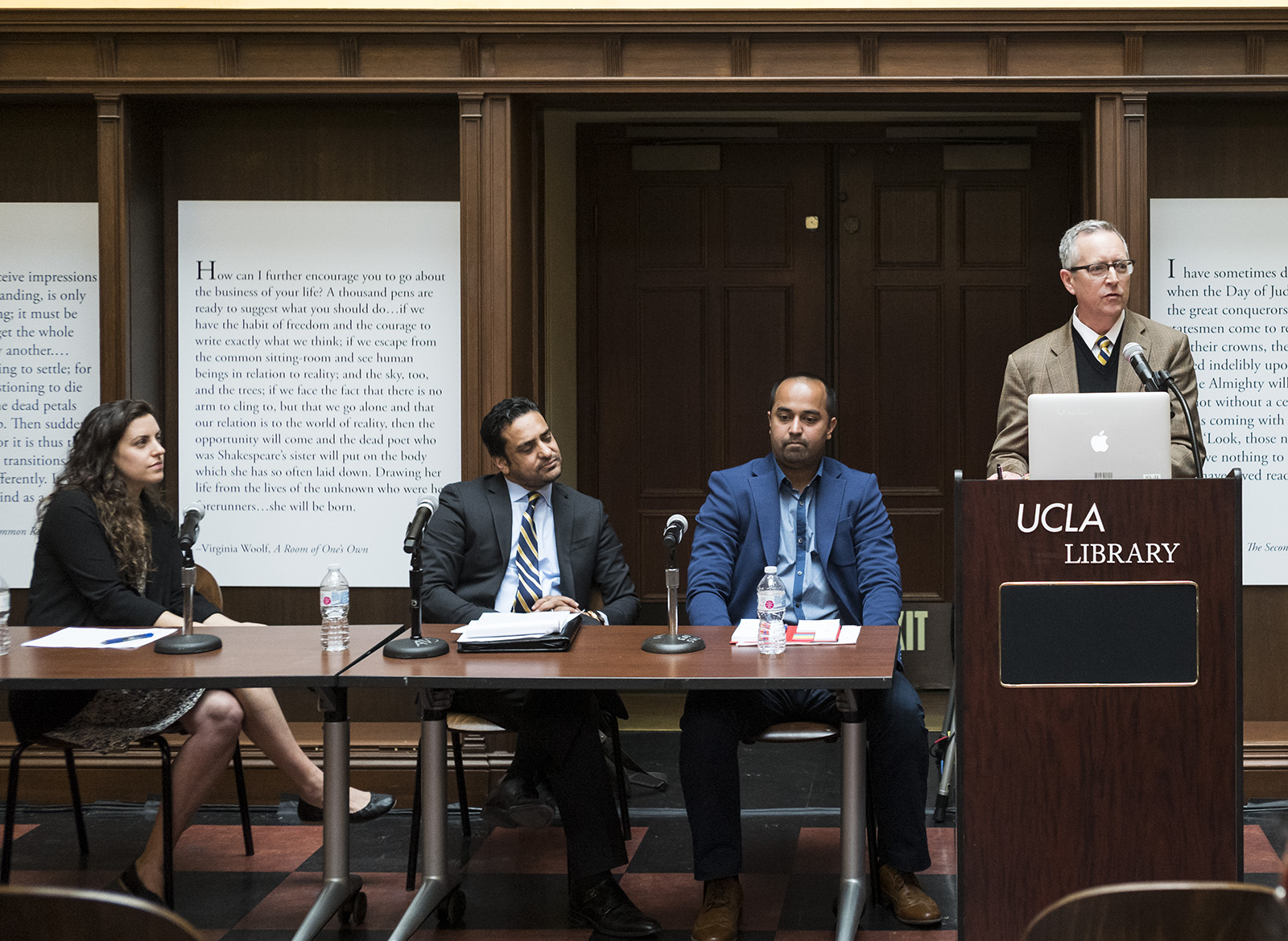 A panel of law and sociology professors talked about the ethnic cleansing of the Rohingya people in Myanmar during an event Wednesday. (Quanzhao “Ari” He/Daily Bruin)

UCLA experts in human rights and mass violence drew parallels between the ethnic cleansing currently occurring in Myanmar with past events, such as the Holocaust, at an event Wednesday.

The UCLA Burkle Center for International Relations and the Center for Southeast Asian Studies hosted a panel about violence against the Rohingya ethnic group in Myanmar. The event, which about 100 people attended, featured panelists including law and sociology professors who said the ethnic cleansing occurring in Myanmar could be categorized as a genocide.

The Rohingya are a majority Muslim indigenous group in Myanmar, the Buddhist-majority country formerly known as Burma.

Geoffrey Robinson, a Southeast Asian history professor, said about 700,000 Rohingya have been displaced to Bangladesh and other nations in the last year.

“Impartial observers will say it has all the hallmarks of a genocide, and it’s definitely an ethnic cleansing,” he said.

The group has been targeted by the Burmese military since the end of British colonization in the 1950s, and has been especially targeted in the past two years, according to the Burkle cCenter.

Ko Ko Naing, a founding member of the Los Angeles Rohingya Society and panelist at the event, said the Rohingya, who primarily live in Myanmar’s Rakhine state, are restricted from worshipping, traveling, marrying and pursuing an education.

“According to the Burmese government, I don’t exist. Growing up in Rakhine is like segregation,” Naing said. “My uncle and cousin had to do forced labor in concentration camps.”

Amjad Mahmood Khan, a panelist and UCLA law professor who specializes in asylum and refugee law, said he thinks it is difficult to prosecute Myanmar officials who engaged in ethnic cleansing against Rohingya people because their actions are not currently considered genocide.

“The word ethnic cleansing has no meaning under international law, only rhetorical force. Many have called (the violence against the Rohingya group) ethnic cleansing, but that is not a crime under international law,” he said. “Whether you call it a genocide – which the U.S. hasn’t, by the way – it is a crime against humanity, and it is the largest forcible deportation of a population since Rwanda.”

Robinson added that whether the Myanmar government’s action is considered a genocide is contested because the definition of genocide is vague.

“The reason for this contention is the definition is difficult to nail down,” he said. “Regardless of what the legal definition says, the term is usually invoked when vast numbers are killed.”

Khan said he thinks by removing economic sanctions on Myanmar, the United States has worsened the situation by emboldening the government to crack down on Rohingya villages.

The United States imposed a ban on exports from and imports to Myanmar from 2003 to 2016, when former President Barack Obama lifted the sanctions.

He added that because the Rohingya people are of a different ethnic group than the majority of the Myanmar population, the government thinks they should not be citizens.

Aliza Luft, an assistant professor of sociology and panelist, said her grandparents were all Holocaust concentration camp survivors. She added her background motivated her work to study genocide and ethnic cleansing in places like Myanmar and Rwanda.

“My family history alerted me to complicated decisions like why people assist genocide or how they resist it,” she said. “I’ve been fascinated with exploring why people choose assisting or resisting ever since.”

Luft said she thinks citizens should stop supporting corporations that do business in Myanmar, such as Chevron Corp. and Bulgari Diamonds.

Naing said he thinks the General Assembly of the United Nations must act to protect the group by sending a peacekeeping force to guard the Rakhine state. He added the Myanmar regime is surviving because it conducts trade with China, Singapore and Russia.

Robinson said he thinks people should not be divided on whether the number of Rohingya deaths has reached the threshold of being defined as a genocide, but must instead raise awareness about the growing violence and call on international governments to intervene.

“One other way to look at (the situation) is as a rare moment when we know enough in time to do something,” he said.