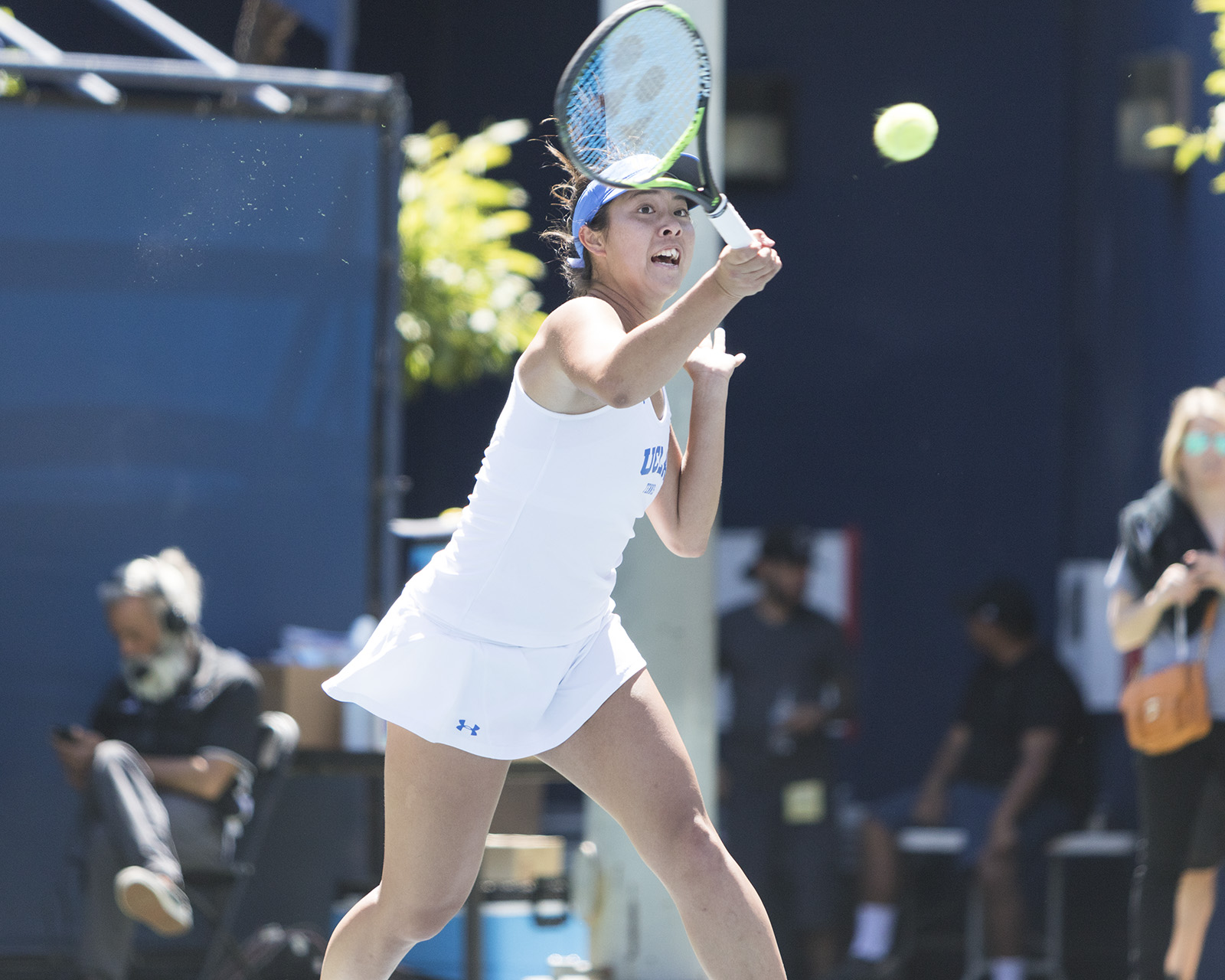 Ena Shibahara’s singles ranking dropped into the doubles digits in January after starting the season ranked No. 1. The sophomore has now won five consecutive singles matches as the Bruins head into the NCAA tournament. (Ken Shin/Daily Bruin staff)

Ena Shibahara was the No. 1 singles player in the nation for the entire fall season – but her dominance didn’t last. Her ranking dropped into the double digits in January.

“(Shibahara) is definitely playing better than she was a couple months ago,” said coach Stella Sampras Webster. “She’s gotten herself back into playing with a lot more confidence and doing a better job of managing her playing style.”

The sophomore started the calendar year with a seven-match win streak at court one singles, including a title at the Freeman Memorial Championships.

Shibahara then went on to win only four of her next 12 matches. She recorded five losses during the stretch, each to a lower-ranked player.

The now-No. 14 Shibahara appears to have hit her stride with five consecutive singles wins.

“I feel like I’m starting to figure out what I need to do in my matches,” Shibahara said. “I mean, it’s not perfect yet, but I am definitely getting on a roll.”

Shibahara’s recently picked up a win over Stanford’s No. 16 Michaela Gordon in the Pac-12 championship. In their previous encounter, then-No. 8 Shibahara was upset by then-No. 17 Gordon.

Both matches went to three sets – but this time, Shibahara came out on top.

“I have some confidence going into every match now that I am going to be able to bounce back and get the win, so I feel pretty good right now,” Shibahara said.

Sampras Webster said that the team feels more comfortable when its top singles player is at her best.

“It’s really key for us for (Shibahara) to get those wins because she’s such a big part of the team,” Sampras Webster said. “Knowing that we have a chance for her to win because of the way she’s playing always takes some of the pressure off for the rest of the girls.”

Shibahara’s return is timely, as the Bruins head to the NCAA tournament next week.

Even with a second-place finish in the Pac-12 tournament, No. 30 redshirt sophomore Jada Hart said she’s confident in the team’s chances.

“I think this loss is definitely going to fuel us going into the NCAA tournament,” Hart said. “We still have a great chance at winning the tournament.”