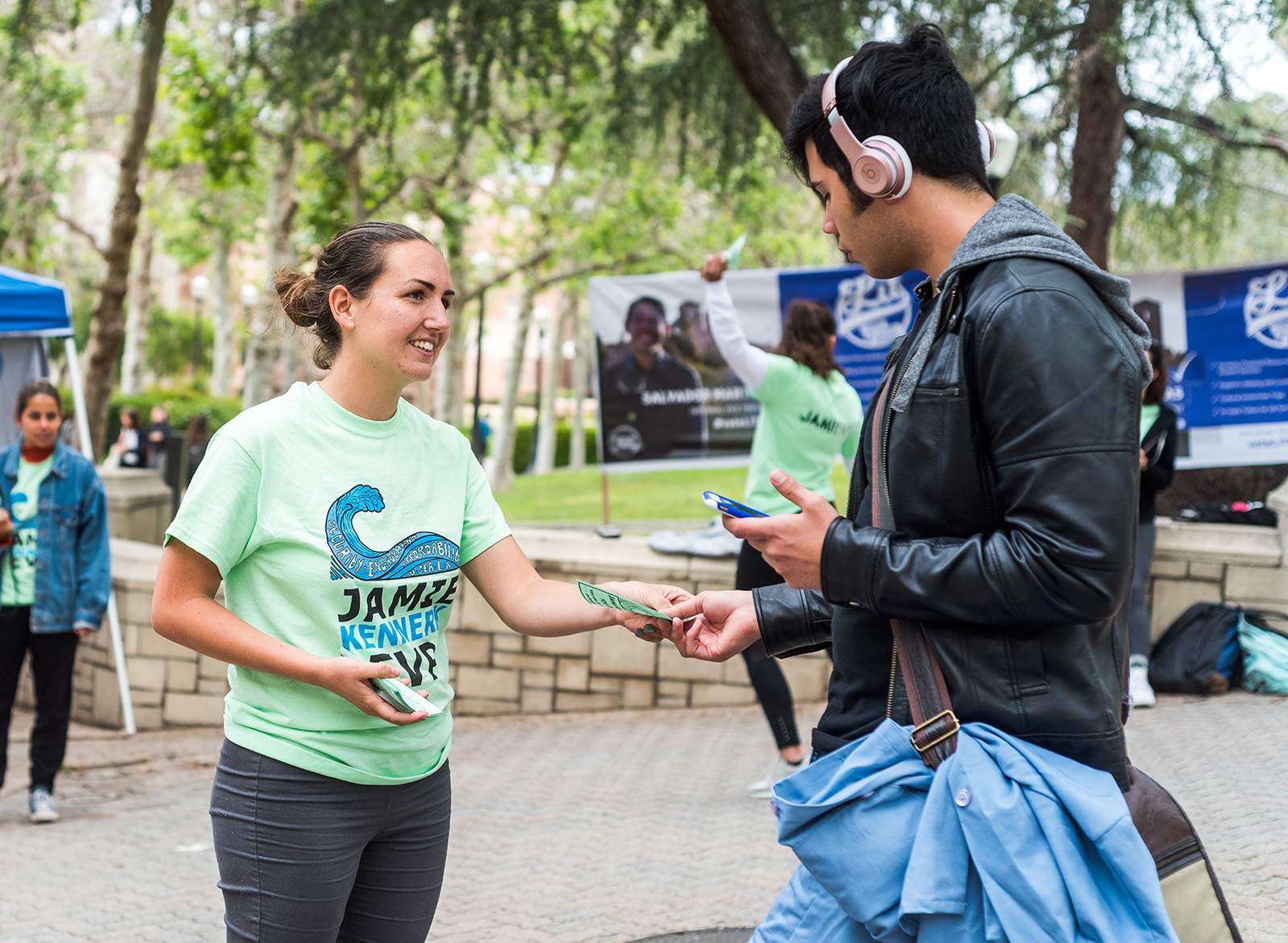 Jamie Kennerk campaigns for the undergradaute student government elections. The Election Board has limited candidates to spending only $600, but this spending limit is still too high. (Kristie-Valerie Hoang/Assistant Photo editor)

UCLA’s undergraduate student government does a good job preparing students for politics in the real world – especially when it comes to blowing large amounts of cash on their campaigns.

It’s no secret UCLA’s student government elections are costly. The Undergraduate Students Association Council even passed an amendment to its election code last month that allows the election board to reimburse a portion of candidates’ campaign expenses. The reimbursement comes from 10 percent of the election board’s current budget, split evenly among all candidates. Campaign spending for candidates has also been capped at $600.

Election Board Chair Jack Price said he hopes these reforms will help encourage more Bruins to run for office by removing financial barriers to enter as candidates. Median campaign expenses over the past few years totaled $640, he said.

“Money is the most useful tool a campaign can have,” Price said.

Unfortunately, it is hard to envision these election code reforms succeeding. Candidates generally need to spend at the level of their opponents to run competitive campaigns. Most students, even those interested in running, are neither capable nor willing to spend around $600 regardless of the opportunity to get reimbursed for some of their spending. As a result, USAC elections will continue to be dominated by a few affluent voices.

Instead, USAC should further reduce the spending limit to around $200. This is an amount that is more affordable for the average student and is feasible given candidates can still reach many voters via free social media platforms. Lowering the spending limit to this amount would help even the playing field, as more Bruins would be able to run for office competitively.

Price said he thinks it’s important for USAC elections to be accessible and added he hopes the election board will eventually be able to use 50 percent of its budget to reimburse candidates.

“Elections should be a marketplace of ideas, not dollars,” he said.

While reimbursing campaigns is not necessarily a bad idea, drastically reducing the spending limit would be much more effective at democratizing USAC. Reducing the average amount of money students need to spend on a campaign would encourage more potential candidates to run for office and cultivate a wider variety of ideas in the on-campus political sphere.

Many Bruins interested in running for USAC have an underlying fear of not being able to spend enough money to properly compete, said incumbent General Representative 1 Nicole Corona Diaz. She understands that point as well, as she experienced it last year when running for the council. Her campaign expenditures totaled just $72 in the 2017 election.

Corona Diaz’s low amount of cash expenditures forced her to be more creative in how she spent campaign funds. A small personal budget inhibited her from printing her face on her sign board, and instead she used the space to emphasize the ideas of her campaign. She added she thinks sign boards generally only help students learn candidates’ faces, not their ideas.

Corona Diaz’s win is an exception, though. As it stands now, winning is possible but less likely for a candidate who does not spend at the level of their opponent regardless of the quality of their ideas.

Campaign expenses have continued to be high this year despite the election board’s reforms. Of the 18 USAC candidates who have reported campaign expenses, only three have spent less than $200, while 12 have spent at least $350. These campaigns are still spending at levels many students can’t match.

However, candidates do not need to spend big to connect with voters – Corona Diaz’s success in last year’s general representative campaign showed us that. After all, T-shirts are currently the item the most campaign funds have been spent on. Limiting the number of printed T-shirts and other trinkets, such as bottle openers, single-use coffee cups and mood cups, would have negligible effect on campaigns.

After all, social media makes it far cheaper to run a campaign and is far more effective than putting out fliers, Price said. Candidates can access a wider range of people with effective social media use – many times at no cost.

There are compelling reasons to drastically lower the campaign spending limit. Leveling the political playing field financially will open doors for students who are not able to throw large amounts of money at campaigns and who have traditionally been disincentivized from running.

Campaign quality won’t be harmed with a lower spending limit. In fact, lower spending limits would mean that all USAC campaigns would have to prioritize creativity over just plastering candidates’ faces on sign boards. Candidates would have to find the most efficient, cost-effective way to communicate with student voters, thereby improving campaign quality rather than harming it.

Getting more interested Bruins to run for office can only help student government’s inclusivity.

“I think it’s better to have a lot of students running because USAC can seem elitist,” Corona Diaz said.

USAC campaigns should be a way for candidates to showcase their creativity and commitment to solving campus issues, not how deep their wallets go.