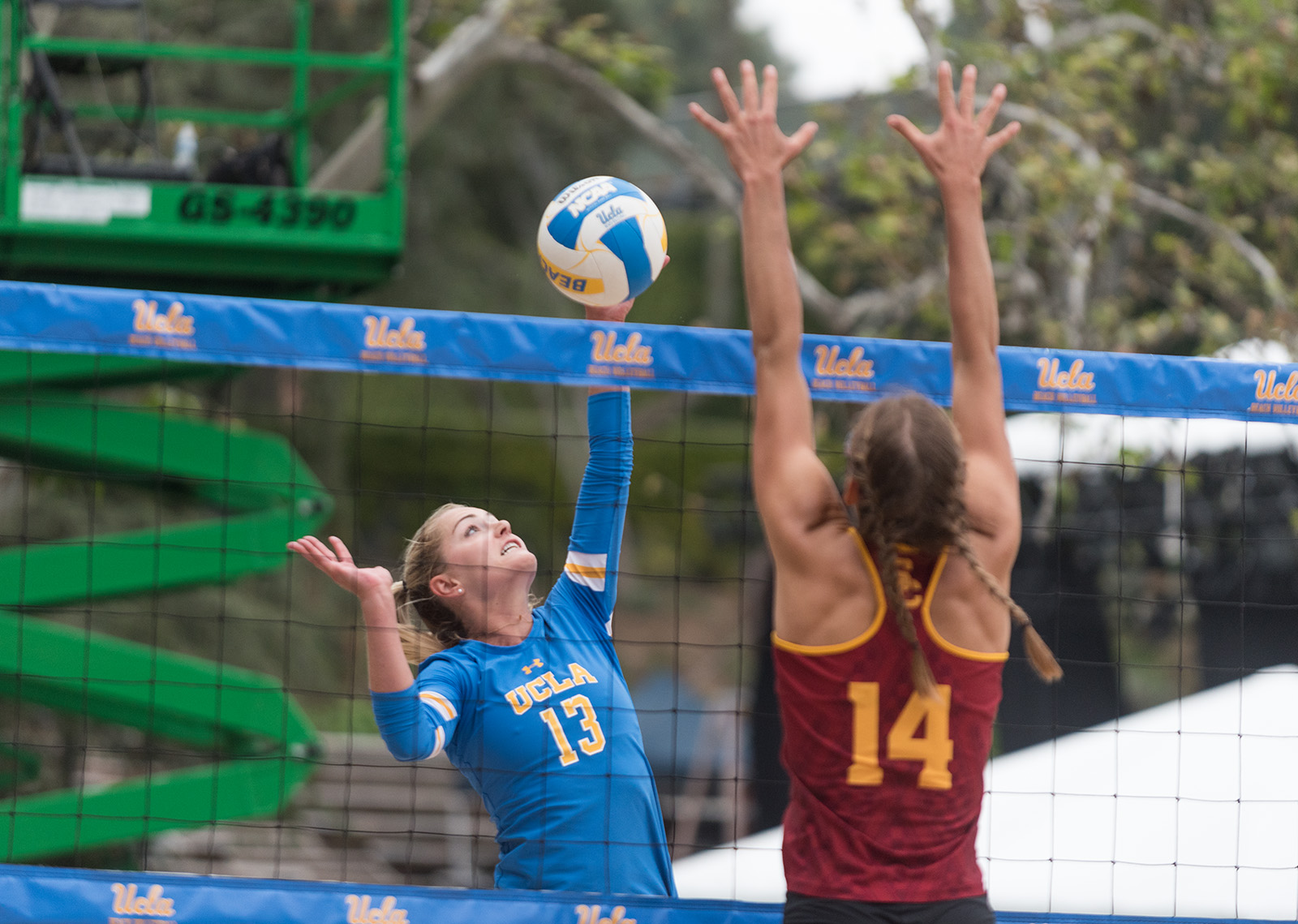 Junior Nicole McNamara has led the Bruins to earn the top seed in the NCAA tournament, alongside junior Megan McNamara on court one. (Habeba Mostafa/Daily Bruin)

Of the nine Pac-12 beach volleyball programs, two qualified for the NCAA tournament in Gulf Shores, Alabama this weekend.

No. 1 UCLA (35-3), named the Pac-12 champion Saturday, earned the No. 1 seed in the tournament for the first time in program history. The Bruins currently hold a 30-match win streak.

No. 5 USC (25-12), the reigning NCAA champion, earned the No. 5 seed. The Trojans fell to the Bruins in the finals of the Pac-12 championships Saturday.

UCLA has faced all seven of the other teams in the field and holds a 14-3 record against them. Its only losses have come from No. 2-seeded Pepperdine (24-3), No. 3-seeded Hawai’i (35-3) and USC earlier in the season.

The Trojans have won all three of the national championships that have been held for beach volleyball, including the AVCA title awarded in 2015 and the NCAA title in 2016 and 2017. They have also taken home 12-straight dual wins at Gulf Shores.

UCLA and USC both begin play Friday, with the Bruins facing No. 8-seeded FIU (23-10) and the Trojans taking on No. 4-seeded Florida State (30-6). Both Pac-12 programs took home wins against their respective opponents during the regular season.

The Pac-12 now sports three top-seven teams in the country.

The Bruins had a weekend off from conference play, but the Cardinal took two out of three against fifth-place California (24-17, 10-11). UCLA won its series against Stanford in April, but the Cardinal currently hold the tie-breaker.

The Beavers, who went 2-1 against Arizona State (18-25, 10-11) over the weekend, have yet to play the Bruins or Cardinal this season. Trailing by just two games, they still control their own destiny in the conference standings.

Both the Pac-12 and the Southeastern Conference have three top-seven teams, with No. 6 North Carolina as the lone Atlantic Coast Conference representative.

The teams are in.

The NCAA selection committee kept No. 4 UCLA women’s water polo (22-7) as the fourth seed for the NCAA championship this weekend. The Bruins earned an at-large bid despite dropping its final two games at the MPSF championship over the weekend.

No. 2-seeded Stanford (18-3) and No. 3-seeded California (19-5) also entered the tournament as at-large qualifiers, while No. 1-seeded USC (23-1) earned the top seed as an automatic qualifier after taking home the MPSF title Sunday.

All four MPSF teams earned byes in the first round and will begin competition in the quarterfinals.

UCLA will face No. 5-seeded Pacific (18-7) on Friday afternoon at 1:45 p.m. in the quarterfinals of the tournament.

Over the weekend, USC defeated Stanford 13-12 in overtime for the MPSF title. The Trojans’ only loss this season was to the Cardinal, falling 9-3 in February.

USC and Stanford have combined to win the past eight national championships. The Cardinal have won three in the last four years, but the Trojans are the favorite this year.