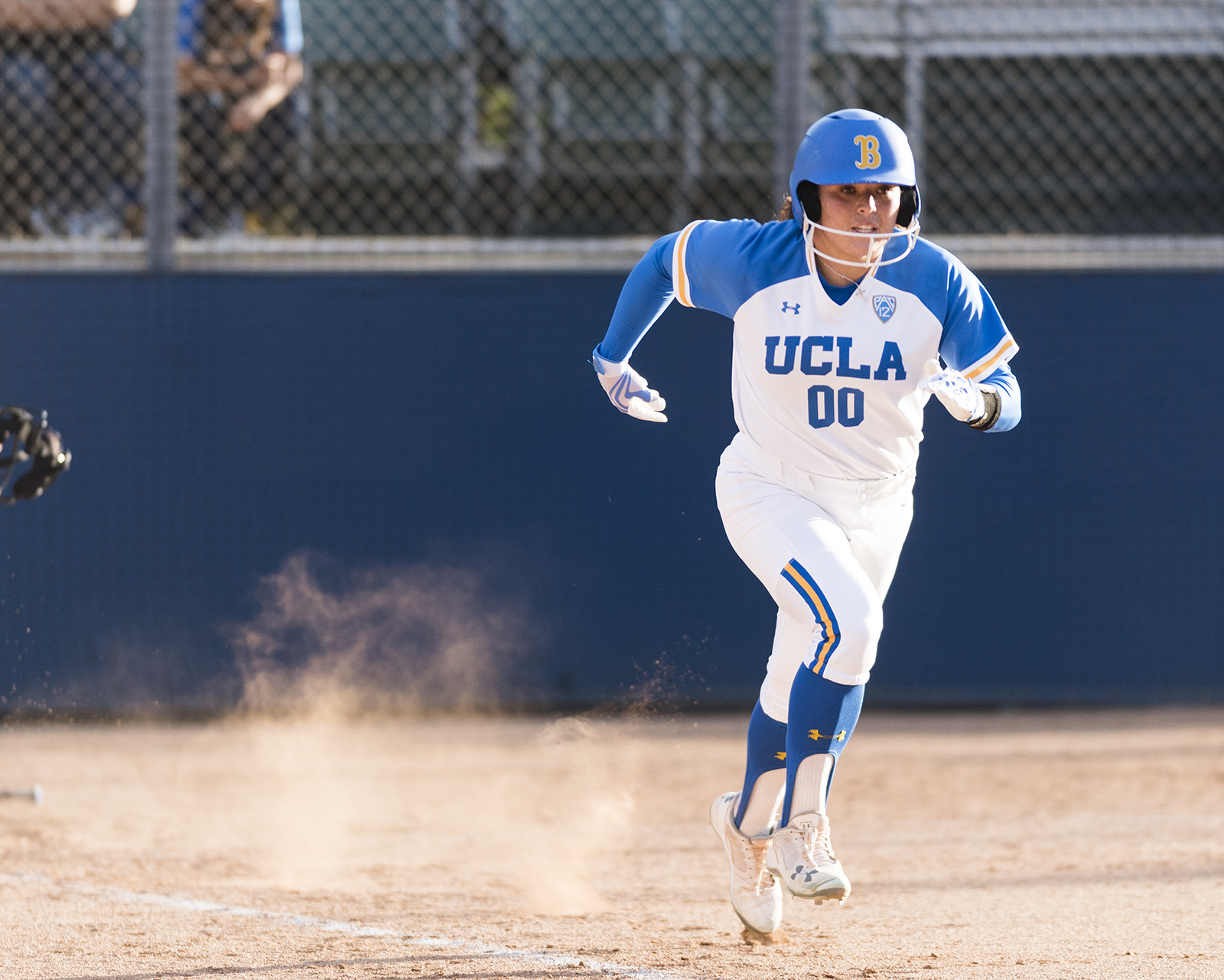 Redshirt sophomore Rachel Garcia yet again turned in highlight performances on the mound for the Bruins. She tossed seven shutout innings and struck out 18 batters Friday night. (Liz Ketcham/Daily Bruin)

For the first time since 2014, UCLA softball entered a weekend matchup ranked as the No. 1 team in the country.

“Right now we’re in a really good place,” Inouye-Perez said. “The mindset of the team is solid, we’re confident, we’re positive and looking for great things.”

The Bruins took a break from conference play, defeating the Cowgirls 7-2 and the Coyotes 11-1 in five innings Friday. The next day, UCLA once again picked up a pair of victories over South Dakota 4-1 and Oklahoma State 7-0.

The highlight of the weekend was redshirt sophomore Rachel Garcia’s pitching performance, throwing a career-high 18 strikeouts in the two-day finale against Oklahoma State, eclipsing the previous high of 17 she set earlier in the season against Fordham.

“To have a dominant force out there like (Garcia) is special,” said senior first baseman Madeline Jelenicki.

Jelenicki, who played right field, first base and designated player during the two-day doubleheader, said Garcia’s high strikeout rate calls for greater attention to detail defensively from the Bruins.

“You have to be more prepared when you’re going a whole game without taking a lot of grounders or getting balls hit,” Jelenicki said. “The one that gets hit you have to make sure you’re doing everything right.”

The height of Garcia’s performance came in the top of the fourth in Saturday’s finale. After giving up the only hit of the night, a double, and following it with a hit by pitch, Garcia found herself in a jam with runners on second and third and no one out.

Trailing 6-0, this was Oklahoma State’s best chance at getting on the board. The redshirt sophomore kept her composure, striking out the next three batters, all swinging.

“Phenomenal, just phenomenal,” Inouye-Perez said. “The most impressive part was how she changed speeds. She was dominating in the circle.”

UCLA’s lineup, meanwhile, batted its way to an early lead throughout the weekend.

Putting runs up early on the board has been a theme throughout the season for the Bruins, who have now scored in either the first or second inning of a game 31 of the 47 times they’ve played.

“It definitely takes some pressure off,” said sophomore center fielder Bubba Nickles. “We never let up – our goal is to win every inning, especially early on.”

The Bruins, who for a majority of the season lead the nation in scoring, recently fell to fourth in runs per game after mustering just 7 in their three-game series against No. 4 Washington.

This weekend, UCLA outscored Oklahoma State and South Dakota by a combined score of 29-4.

Next up for the Bruins is a trip to Cal State Fullerton, where they’ll take on the Titans on Tuesday before heading north and returning to conference play to square off against Cal.