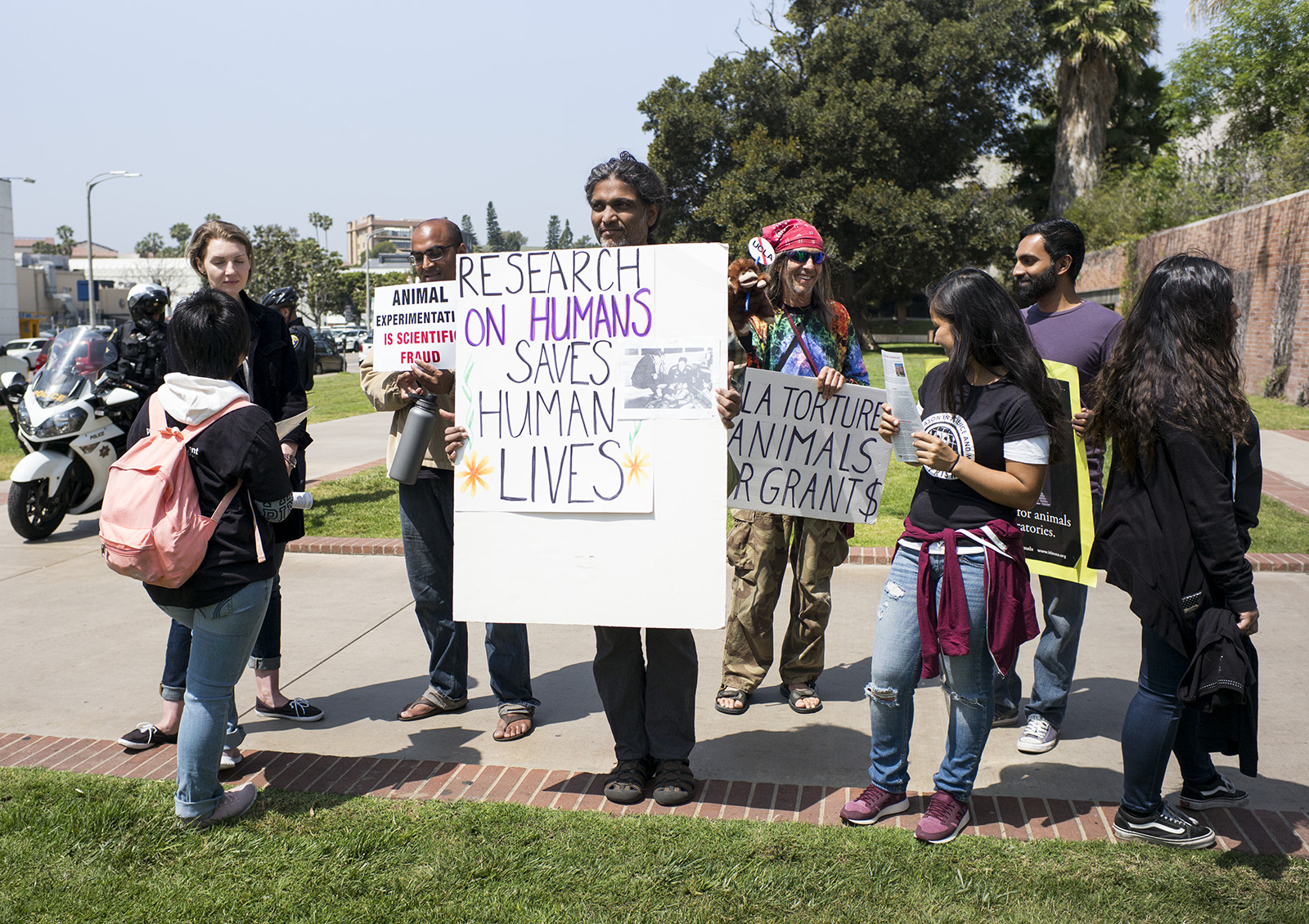 (Ken Shin/Daily Bruin staff) Four animal rights groups, Progress for Science, In Defense of Animals, Los Angeles for Animals and Liberation Los Angeles gathered Friday for a protest against UCLA’s use of animals in research laboratories. UCLA has faced pressure from the animal-rights community for years. Activists dropped an explosive package onto the car of a researcher who used primates in his studies on schizophrenia and drug addiction in 2009.

Correction: The original version of this post misspelled Cory Mac a’ Ghobhainn's name.

An animal rights protester at UCLA flipped over his dog’s scarred ear to reveal a black tattoo that was used to identify him as a test animal in a cosmetics laboratory.

The dog walked with animal rights groups Progress for Science, In Defense of Animals, Los Angeles for Animals and Liberation Los Angeles on Friday for a protest against UCLA’s use of animals in research laboratories. Protesters chanted “UCLA has blood on their hands” and “It’s not science, it’s violence,” as they walked to Chancellor Gene Block’s office in Murphy Hall.

Cory Mac a’ Ghobhainn, a member of Progress for Science who helped organize the protest, said she hopes the demonstrations will pressure researchers to explore drug testing methods that do not involve animals. Researchers could use complex computer simulations of the body and pieces of human tissues instead of mice in preliminary drug tests, she said.

“These methods are the future of science and UCLA knows it,” Mac a’ Ghobhainn said. “We’re just asking them to join the 21st century.”

Nigel Maidment, the chair of UCLA Institutional Animal Care and Use Committee, said UCLA is developing technologies that will help minimize animal discomfort or remove the need for animals altogether.

Protesters displayed signs such as “UCLA’s bioethics are stuck in the 1800s” and “UCLA supports animal torture” outside Block’s office. Block conducted research on animals prior to becoming chancellor.

UCLA spokesperson Katherine Alvarado said animal research at UCLA is held to the high standards of the Association for Assessment and Accreditation of Laboratory Animal Care, a nonprofit that promotes the humane treatment of animals in science.

UCLA has faced opposition from the animal rights community for years. Activists sent a package of razor blades that they claimed were AIDS-tainted to a researcher who used primates in his studies on schizophrenia and drug addiction in 2009.

Mac a’ Ghobhainn said Progress for Science does not condone violence against researchers.

“I can understand property damage if you’re rescuing animals, but violence as an intimidation tactic doesn’t do us any good,” she said.

Edythe London, a professor of psychiatry and biobehavioral sciences who has used primates to study addiction, said she has been a target of protesters for years. Animal rights advocates from the Animal Liberation Front flooded her Westwood home in 2007.

“Without animal research, we would never have some of the lifesaving treatments now available like penicillin, blood transfusion and kidney transplants,” she said.

Progress for Science has mainly protested UCLA researchers who perform experiments on nonhuman primates, Mac a’ Ghobhainn said. Michele Basso, who uses monkeys to study the symptoms of Parkinson’s disease, is one of the UCLA professors the organization campaigns against.

Mac a’ Ghobhainn said she thinks Basso’s experimental use of primates is unnecessary because her research isn’t directly applicable to human health and does not have a concrete goal.

Basso said applying for grant money for animal research is highly competitive, which means that only the most impactful proposals are funded. She said each of her experiments have a specific hypothesis that she hopes will give insight into the cognitive impairments of individuals with Parkinson’s disease.

She said she works hard to minimize the number of animals used in her experiments and cares for those that are used.

“I can assure you that our animals receive better health care than many people here in Los Angeles,” she said.

“Scientists really are the ones developing all these new techniques,” Basso said. “I don’t see the animal rights protesters doing any of this.”