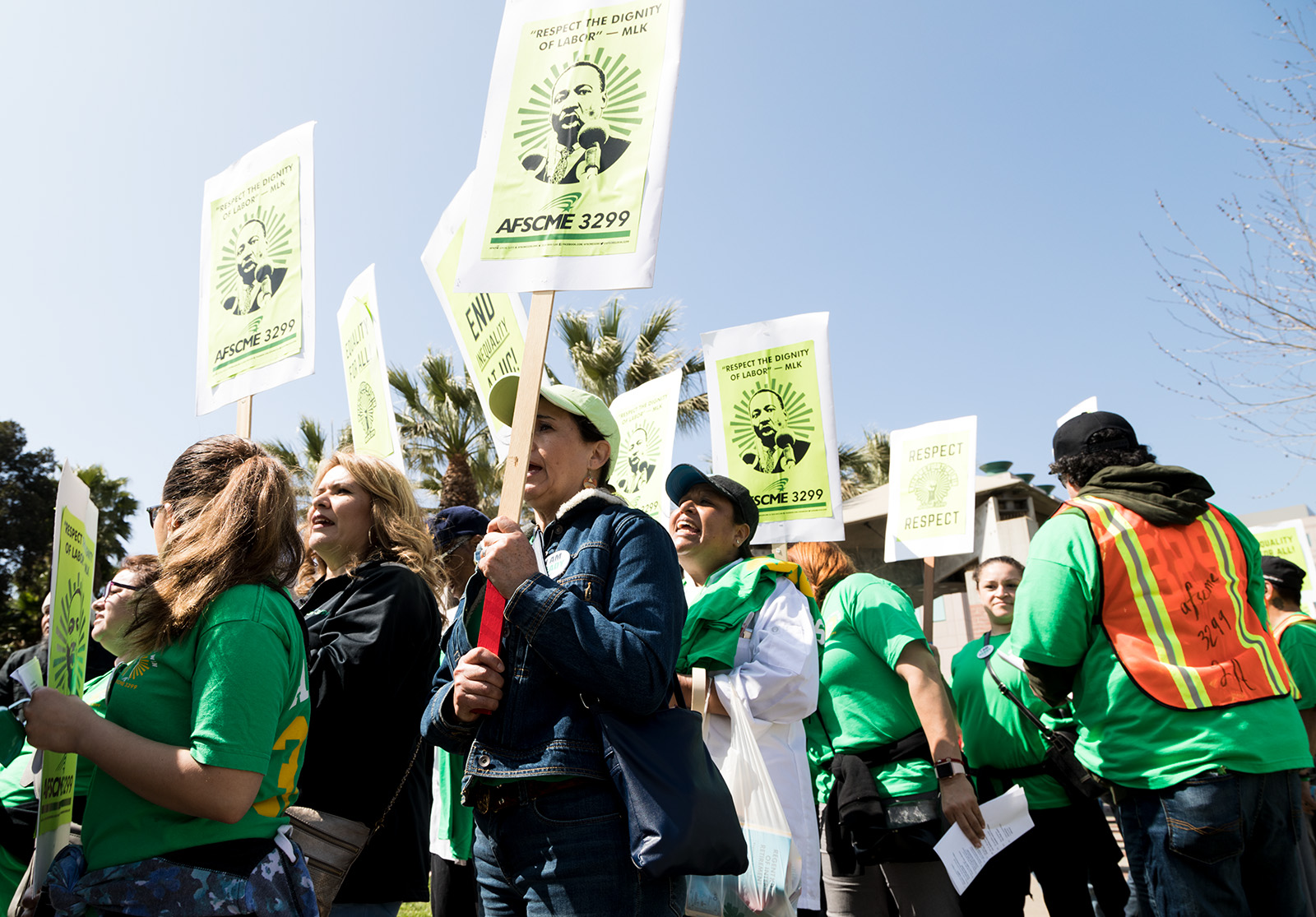 The American Federation of State, County and Municipal Employees Local 3299 reached an impasse with the University of California over its contract negotiations, leading the University to set benefits for the rest of the fiscal year. (Daniel Miller/Daily Bruin)

The University of California’s largest employee union claimed Tuesday that the University is taking advantage of low-wage workers by increasing their retirement age and healthcare premiums for the rest of the fiscal year.

The American Federation of State, County and Municipal Employees Local 3299, which represents the UC’s service and medical workers, has been negotiating with the UC for its next contract for more than a year.

John de los Angeles, AFSCME 3299’s communications director, said that, because the union and the UC have reached a bargaining impasse, the latter is able to decide terms for the rest of the fiscal year per Public Employment Relations Board policy, such as those for wages and benefits, which are lower than what the union negotiated for.

“The Public Employment Relations Board agrees we’ve exhausted the process, and the UC is choosing to enforce these conditions anyway,” he said.

UC spokesperson Claire Doan said the UC is not imposing increased retirement age for current employees but is shifting the band for retirement age for new employees. However, she added that those employees will have to contribute less to their retirement plan. She added that, because the University has completed appropriate procedures following a bargaining impasse, such as a mediation and fact-finding process with the union, it is legally allowed to decide wages and benefits for the 2017-2018 fiscal year.

Doan said current employees will not see any changes in their pension benefits and added the UC’s final April 6 offer to the union, which the union rejected, included a 3 percent raise and compensation fully at or above the wages of similar level workers in other industries.

“The University is not implementing the annual 3 percent raise, the limit on health insurance premiums or the lump-sum payment from its final settlement offer,” she said. “Those aspects of UC’s final settlement offer were in exchange for a multiyear contract, and we are disappointed AFSCME leaders chose to reject our settlement proposal.”

AFSCME voted last week to authorize a systemwide strike in its service and patient care units following a breakdown in contract negotiations after it rejected the UC’s offer. De los Angeles said it is possible the UC’s decision is in response to the union’s vote to strike.

Doan said the strike will negatively affect patients and services at UC campuses.

“We strongly disagree with AFSCME’s decision to strike,” she said.

“The bottom line is workers are upset over what is in the report we released earlier this month,” de los Angeles said. “This labor dispute is over the UC’s failure to address inequality.”

Doan previously said the UC cannot confirm the accuracy of the figures or the conclusions because it does not know how the union arrived at its information.