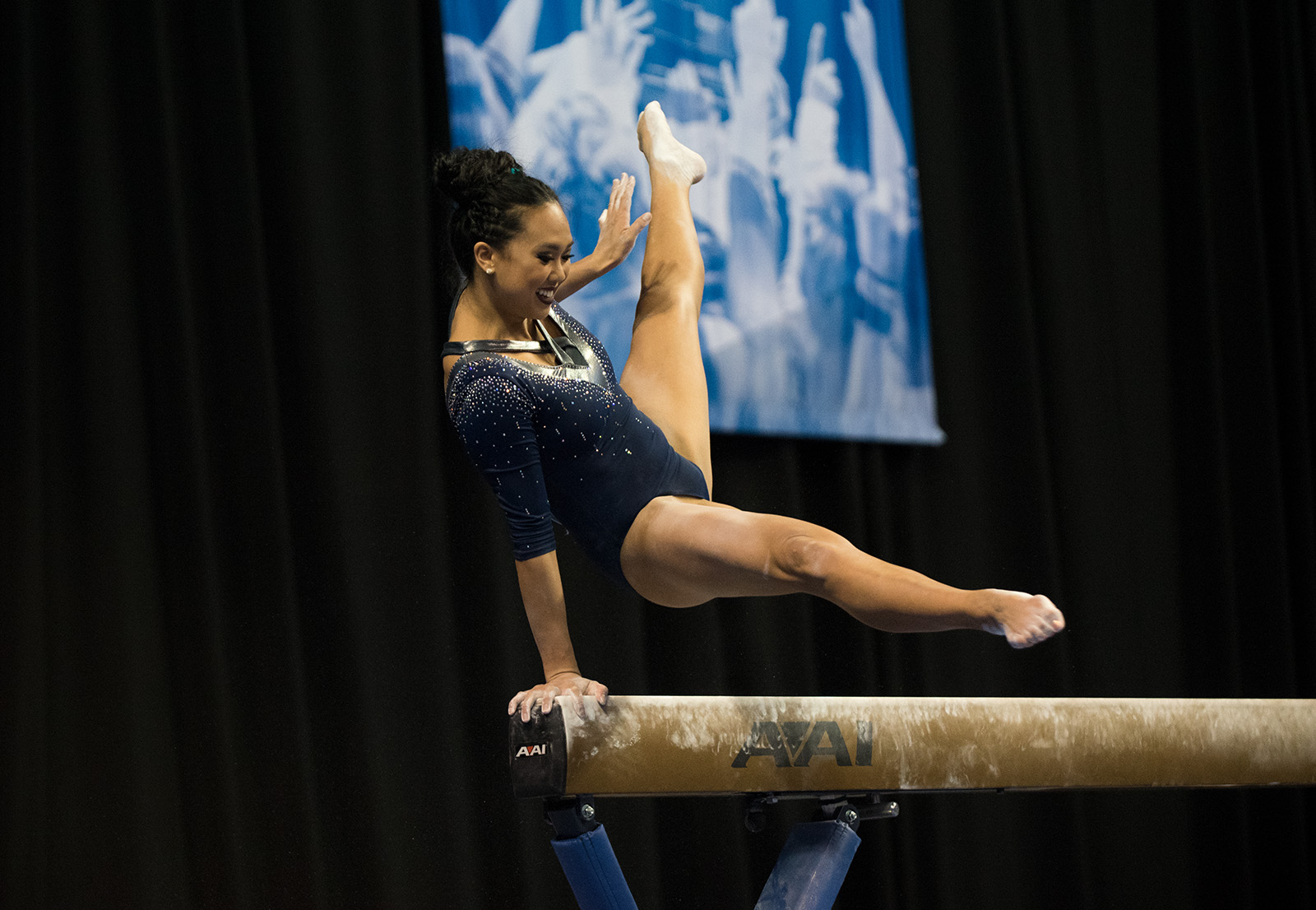 Peng-Peng Lee scored a 10 on beam to catapult UCLA over Oklahoma to win the NCAA title. The redshirt senior also scored a perfect 10 on uneven bars in what was her final collegiate competition. (Daniel Leibowitz/Daily Bruin staff)

Correction: The original version of this article incorrectly stated UCLA is now tied with Stanford University in national championships. In fact, UCLA trails Stanford by one championship win.

ST. LOUIS—The Bruins needed a 9.9750 on the final routine. Just as she did multiple times this season, redshirt senior Peng-Peng Lee delivered.

The win marks UCLA’s 115th NCAA title. The Bruins are second in the nation in national championships, trailing Stanford by one.

Lee said she had no clue the Bruins could win going into the final routine of her UCLA career.

“I did not know what score I needed to win. I didn’t even know we had a chance at winning,” Lee said. “I said, ‘This is my last beam routine ever. I’m just going to soak in every single moment.’ I still am in shock.”

UCLA started the night on the floor exercise in the second rotation. Sophomore Kyla Ross, Friday’s all-around session winner, fell on her routine for the first time this season, dropping her score to a 9.3125. After junior Katelyn Ohashi anchored the Bruins with a 9.9500, they held a 49.4625 score after the event.

UCLA moved to the vault for the third rotation. The Bruins put up a consistent showing in the event, with each gymnast scoring between a 9.8000 and 9.8875. They entered the halfway point of the meet in fourth place, trailing the Sooners by .3250 points.

“We were in the bye before bars, and (Waller) came into the locker room. He came in and just went crazy,” Kondos Field said. “(He said) ‘We are … athletes, and it ain’t over.’ His acting was amazing. And they came back on bars and did amazing.”

The Bruins competed on uneven bars for the fifth rotation after a bye on the fourth. Lee scored a perfect 10, while Ross concluded the event with a 9.9500 to keep the Bruins within striking distance. UCLA’s team score of 49.6375 on the event is the second-highest ever in Super Six history.

Ross said Ohashi helped motivate her going into the final event and that the team had learned to rise and come back after being behind.

“(Ohashi) came up to me right before. One of the meets, we had a fall, and it ended up being one of our best beam rotations,” Ross said. “She told me ‘We thrive under this pressure,’ and that’s what I had in my mind when I went up. I had no doubt.”

In the final rotation, UCLA ended on the balance beam, needing to come from behind to win the championship. Lee and Ross carried the Bruins again, scoring a 10 and 9.9875, respectively. This was just enough to put the Bruins on top to claim the title.

Lee said she believed the team would pull off the comeback the whole time.

“We had our mind set on a national championship. We got our heads back in the game,” Lee said. “I knew somehow, in my head, we were going to pull it off. I just didn’t know how.”

On Friday night, Lee took home the balance beam individual title. Her score of 9.9875 topped the field for her first NCAA title. Ohashi won the national title for the floor exercise. Her Michael Jackson-themed routine scored a 9.9625.