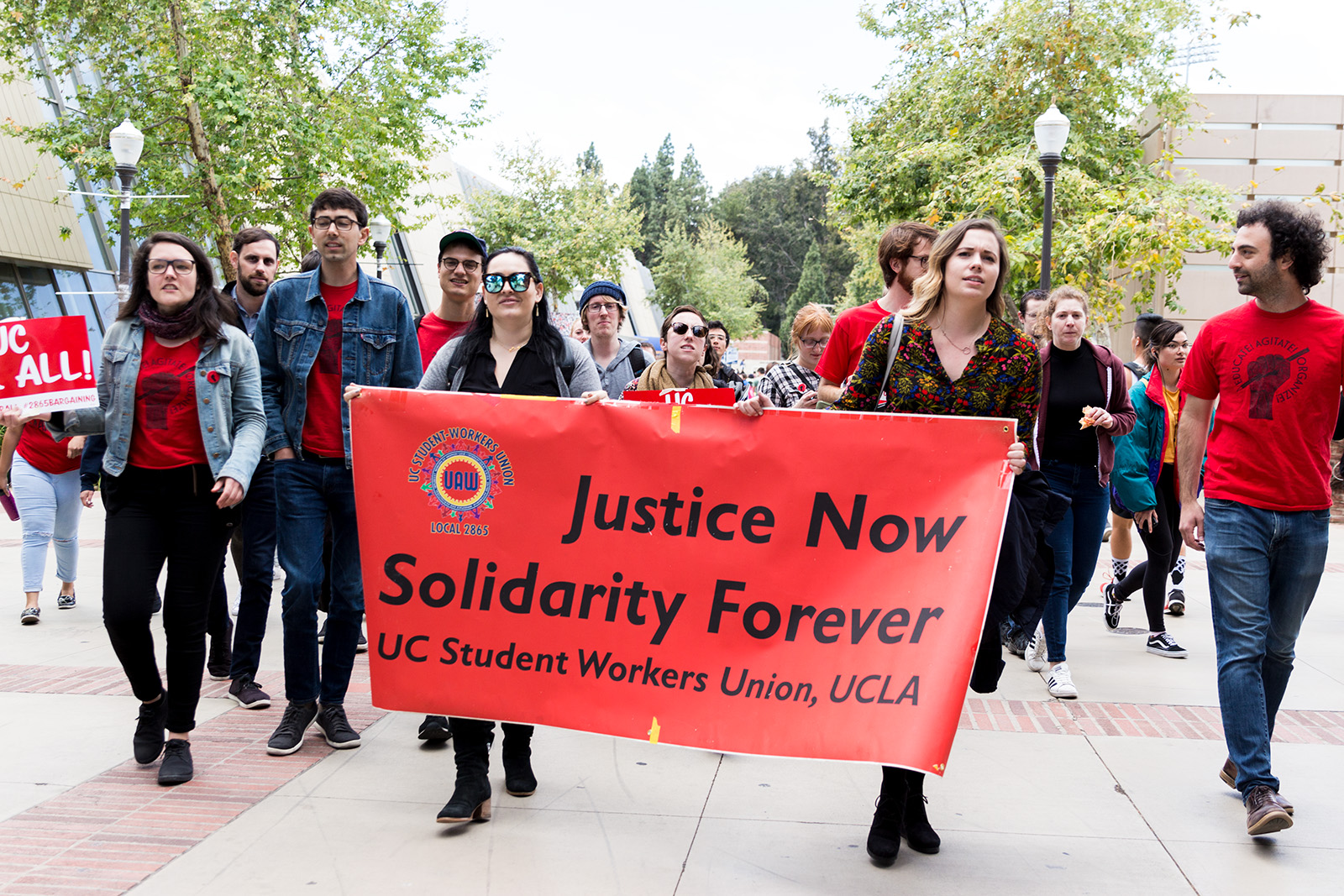 The UC student-workers union Local 2865 is involved in negotiations for the terms of their new contract. Some members of the union said they think the university has taken too long to provide a wage proposal. (Jenna Smith/Daily Bruin)

Student workers from the University of California demanded the UC implement new anti-discrimination and harassment provisions at a union contract negotiation session Thursday.

UAW Local 2865, the UC student-workers union, called for the UC to create procedures that value and protect survivors of sexual assault, as well as extend paid maternity and paternity leave from six weeks to six months. It also asked the UC not to levy certain fees such as nonresident supplemental tuition and campus fees on student workers.

The union also proposed the UC strengthen protections against retaliation for reporting discrimination and harassment, be more transparent in how it handles discrimination and sexual violence, and install more all-gender restrooms and lactation facilities.

The two-day bargaining session, which started Thursday and will continue Friday, is expected to draw many student workers and their supporters among other UC unions, faculty and students to rally on campus, according to an email statement from UC student workers.

Jonathan Koch, a member of the UC student-worker union’s bargaining team, said he thinks the UC has not been very forthcoming in compromising and coming to a settlement regarding wages in the previous three bargaining sessions.

The union has been in negotiations with the UC since February for the terms of their new contract, which will follow their current contract, which expires June 30. The UC previously said it would have a wage proposal prepared for the union by the second bargaining session in March, but announced Thursday they would not make their proposal until UAW Local 2865 provided one.

UC spokesperson Stephanie Beechem said in a statement that the University is working toward negotiating a fair agreement as quickly as possible.

“Our goal is to reach a multiyear agreement that recognizes the significant contributions academic student employees make to the UC with competitive pay, family-friendly benefits, a safe workplace and good working conditions,” she said.

KT Bender, a member of the union and a graduate student in the department of geography, said many students are concerned that UCLA is raising rent for graduate student housing and thinks the university should base rent on student income.

“The university increases our rent every year, but not our wages,” she said.

Mariko Takano, a member of the union and a graduate student in the department of Asian languages and cultures, said she is concerned that the nonresidential tuition fees negatively affect international students in the UC system.

“My department is short on (teaching assistants), and there are a lot of international students who could do it but can’t stay,” she said. “I need to graduate soon because there’s no way to cover my fees beyond next year.”

Davide Carpano, a member of the union’s bargaining team and a graduate student of sociology and science studies at UC San Diego, said he and many of his peers feel burdened by San Diego’s high rent.

“I want to be a part of an intellectual community, so every time there is a student worker who is unable to finish their degree, it affects this community and the quality of work they do,” he said.

“Some of our colleagues are responsible for 200 students, and if the UC wants to be a top-tier institution, we have to have a well-paid and respected workforce,” he said.