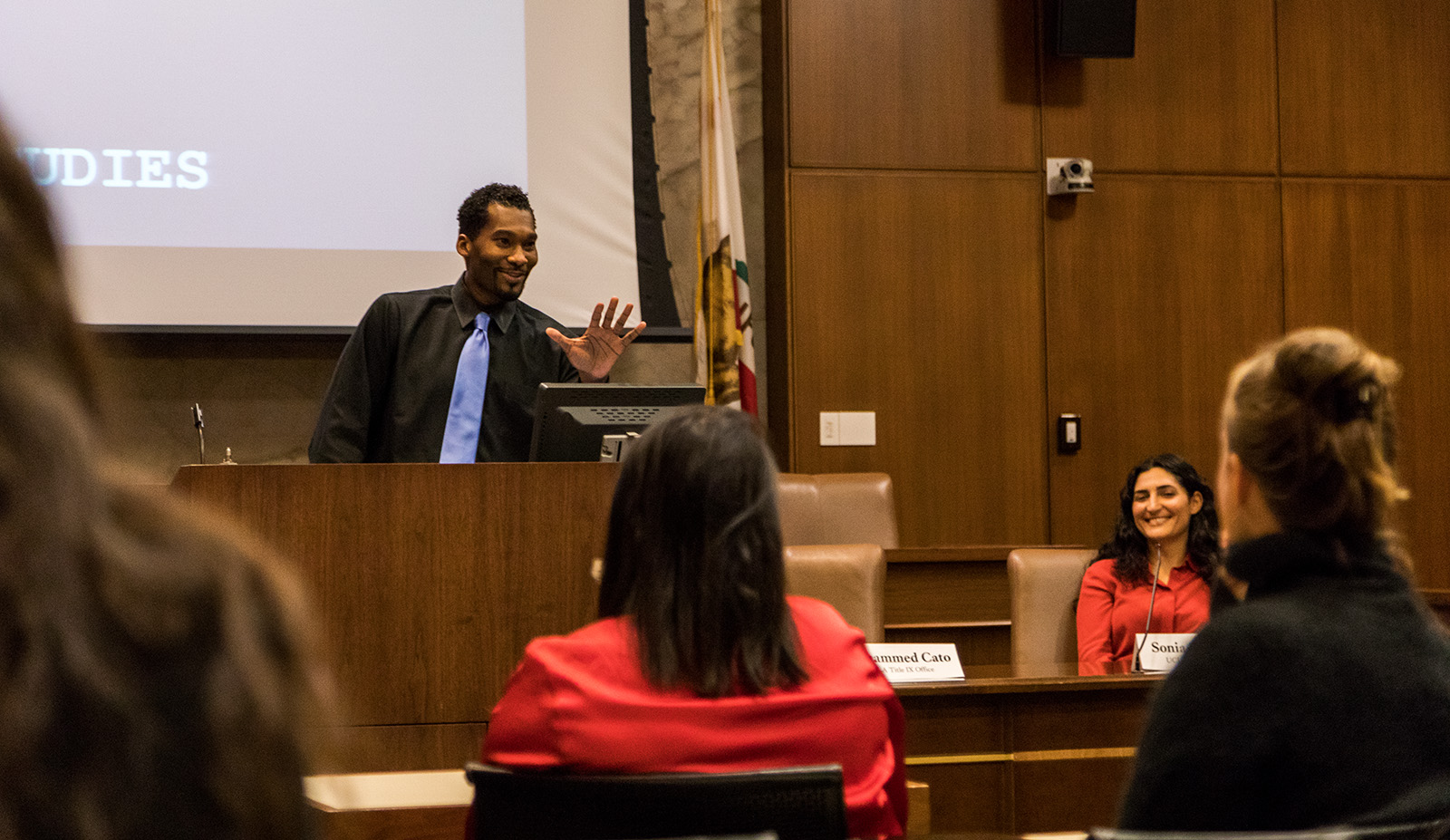 Mohammed Cato, the Title IX coordinator at UCLA, spoke at an event in which students, faculty and staff learned about how the UCLA Title IX Office deals with reports of sexual assault and sexual harassment. (Daniel Miller/Daily Bruin)

Students, faculty and staff learned about how the UCLA Title IX Office deals with reports of sexual assault and sexual harassment at an event Wednesday afternoon.

The event, which was organized by UCLA’s Office of Equity, Diversity and Inclusion, provided an overview of how the university deals with sexual harassment incidents and went through various case scenarios. The event was part of the university’s inaugural Sexual Violence and Sexual Harassment Awareness Week.

The Title IX Office is responsible for UCLA’s compliance with federal Title IX laws, including filing reports, conducting investigations, providing training and referring victims of sexual harassment or discrimination to other resources on campus.

Mohammed Cato, the Title IX coordinator at UCLA, said he thinks some people may be hesitant to trust the UCLA Title IX Office because they think the office only acts in the interest of the university, and would take the side of faculty or staff if a student reported being a victim of sexual misconduct. However, he said the Title IX Office is on campus to help students and faculty and can only do this if people report incidents of sexual assault and harassment.

“Once we have reason to believe that some form of discrimination has occurred, we are obligated to act,” he said. “To me, holding folks accountable is in the best interest of the university.”

Cato said staff are required to report all cases of sexual harassment even if students asks for confidentiality. He added faculty members sometimes fail to report sexual discrimination because they do not want to lose their students’ trust.

“The student feels as if their trust has been betrayed, but if the university is on notice then the university has an obligation to address the possibility of sexual violence,” he said.

Cato added that if a student wants to discuss sexual violence confidentiality, they can go to Counseling and Psychological Services and the Campus Assault Resources and Education advocacy office.

Victims of sexual assault are not required to respond to requests from the Title IX Office because the office wants to respect their privacy, Cato said.

“Part of the reason we want to reach out is to ensure that they are aware of the resources and reporting options,” he said.

Sonia Shakoori, a Title IX Office investigator, said if an individual reports an incident, it does not necessarily lead to an investigation.

“People confuse reporting to Title IX and having an investigation,” she said. “Our goal is to provide students with the appropriate resources on campus. If you report an incident, we just send you an outreach letter that gives you people you can talk to.”

Shakoori added even if an investigation does not take place, it is still important for the Title IX Office to receive reports of sexual misconduct.

“Reporting these cases gives us a better idea of what is going on on our campus,” she said. “The more we get employee reports, the better we know how to support our students.”

Cato said he was glad to have the chance to talk to the community at the event to clear up misconceptions he thinks people have about the Title IX Office, such as the idea that Title IX only relates to women in sports.

“Having these events and conversations sheds light on what we do and gives people the chance to ask questions,” he said. “It also gives us a way to get feedback and hear from the community because this is a population we are supposed to be serving.”

Muriel McClendon, an equity advisor and associate dean of equity, diversity and inclusion for UCLA College’s division of social sciences, said she attended the event to learn more about Title IX Office procedures so she can help her students.

“Now if a student comes to me and I tell them I have to report it to Title IX, I can also tell them that it may not be investigated and that they don’t have to talk to anyone if they don’t want to,” she said. “I didn’t know any of that before, and I think students will be more willing to talk if they know that as well.”