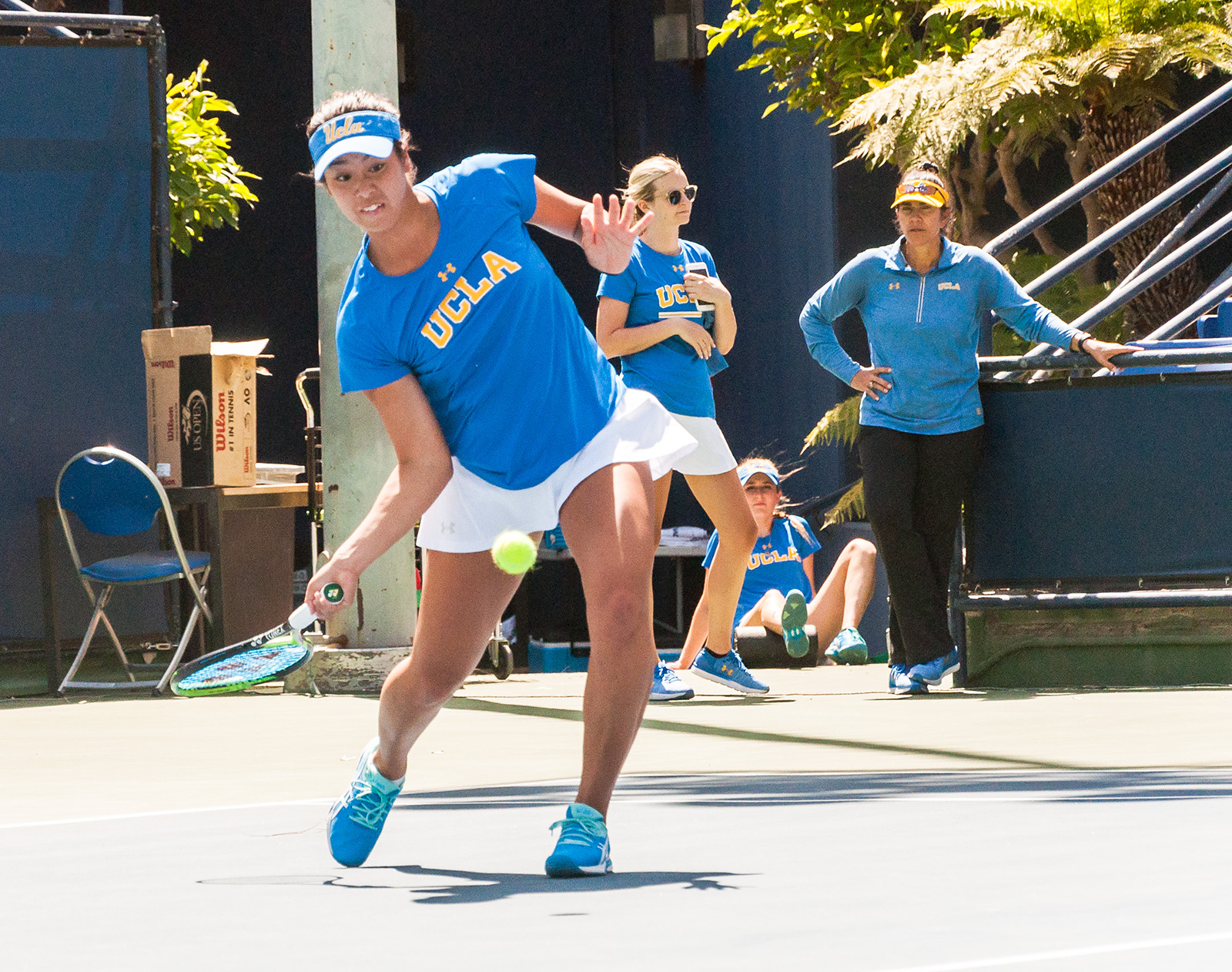 Ena Shibahara clinched the Bruins’ upset win over Pepperdine on Wednesday. The sophomore posts a 10-5 dual match record on the season and has won her previous three matches for UCLA on court one. (Niveda Tennety/Daily Bruin)

The Bruins rallied from a 3-1 deficit to notch their first win against a top-10 team.

After the match, No. 15 sophomore Ena Shibahara said she forgot UCLA was once down 3-1.

“That’s one of the good things about the Pepperdine courts,” Shibahara said. “You can’t see the score of the other courts so you just have to stay focused on your game.”

This match was redemption for the Bruins after the Waves knocked them out of the NCAA Tournament in 2017.

“It was very similar to last year when we played them in regionals,” said coach Stella Sampras Webster. “This time, I think the girls wanted it really bad and played with nothing to lose.”

After losing on court two in doubles, the Bruins rallied to wins on courts one and three and picked up the doubles point.

Shibahara and junior Alaina Miller clinched the point with a 7-6 victory on court three.

“The tiebreaker was probably the easiest part,” Miller said. “All our teammates were behind us and we were on fire.”

The marquee singles matchups had nine of the 12 players ranked in the top 100 – four from UCLA and five from Pepperdine.

The momentum did not carry over for UCLA as it dropped the first set on every singles court but court one.

“I know a lot of us have a few injuries, aches and pains, and we were able to get past that mentally in the second set,” Miller said. “In the second set, the adrenaline kicks in.”

After losing on courts three, four and five, the Bruins were on the verge of defeat.

No. 98 Miller recovered from a slow start to prevail 4-6, 6-3, 6-3 on court six against Dzina Milovanovic, continuing her nine-match win streak. This was Miller’s first three-set match since Feb. 9.

No. 35 redshirt sophomore Jada Hart tied the matchup at 3-3 with a 4-6, 6-4, 6-4 victory over the Waves’ No. 16 Ashley Lahey on court two. Lahey began cramping up toward the end of the match, limiting her mobility.

UCLA will next face USC on Saturday at home in its regular season finale.