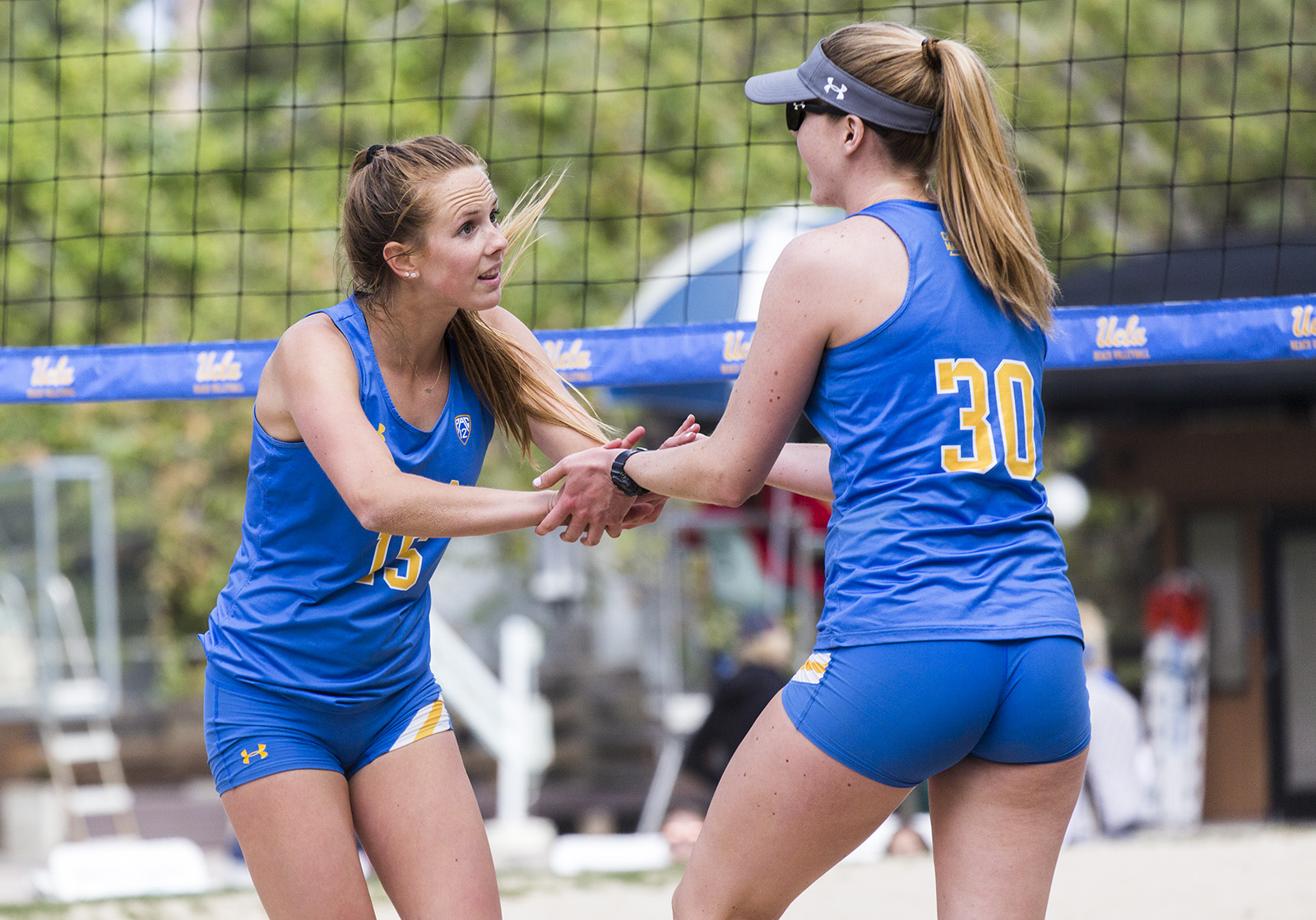 Freshman Megan Muret and junior Izzy Carey post a 24-1 record on court five and an overall record of 28-5 this year, good for best on the team. The duo has helped lead the Bruins to the top rank in the nation. (Keila Mayberry/Daily Bruin staff)

By Ryan Smith and Angie Forburger

With the Pac-12 Tournament looming, the race is on for the top spot in the conference tennis standings.

UCLA men’s tennis (22-2, 7-0 Pac-12) has already claimed the No. 1 seed for the tournament after the Bruins defeated Arizona State and Arizona last weekend to remain undefeated in the Pac-12. If it gets a win over Utah on Friday, UCLA will secure the outright conference title.

For the women, Stanford (14-3, 8-0) and UCLA (17-4, 8-1) are atop the rankings. Stanford currently has the lead, still undefeated in Pac-12 play. The Bruins are not far behind, with their only conference loss coming from the Cardinal. Stanford will face California on Friday, looking to claim the Pac-12 title. UCLA will battle crosstown rival USC on Saturday.

Behind the top-two teams, Arizona State (14-6, 6-3) and California (11-7, 6-3) are both 6-3 going into the final week of the regular season. The Sun Devils will face the Arizona Wildcats on Saturday and California will conclude against Stanford on Friday.

The Pac-12 championships for men’s and women’s tennis will take place April 25-28 in Ojai, California.

With five weeks remaining in the season, three Pac-12 schools continue to fight their ways up the rankings.

Stanford went a perfect 4-0 last week, retaining its spot behind No. 1 Florida as the No. 2 team in the country. Stanford will travel to Tucson, Arizona, this weekend for a series against Arizona (23-12, 6-6 Pac-12).

No. 7 Oregon State (26-6, 7-5 Pac-12) is sitting in fourth place within the conference, but still managed to jump two spots in the national rankings after a pair of victories at Missouri State over the weekend. The Beavers will begin a three-game series Thursday with the Oregon Ducks, who they have not yet faced this season.

Washington will travel to Berkeley this weekend for a three-game set against California (21-13, 7-8 Pac-12).

Pac-12 beach volleyball is gearing up for its third conference tournament.

Nine Pac-12 schools field beach volleyball teams, with five of those teams occupying a spot in the national rankings.

USC has already concluded its regular season matches. UCLA will face Long Beach State, and Stanford and California will play each other in their final games this weekend. Arizona still has two duals remaining against New Mexico and Utah.

The Pac-12 championships are slated for April 26-28 at Stanford, California.