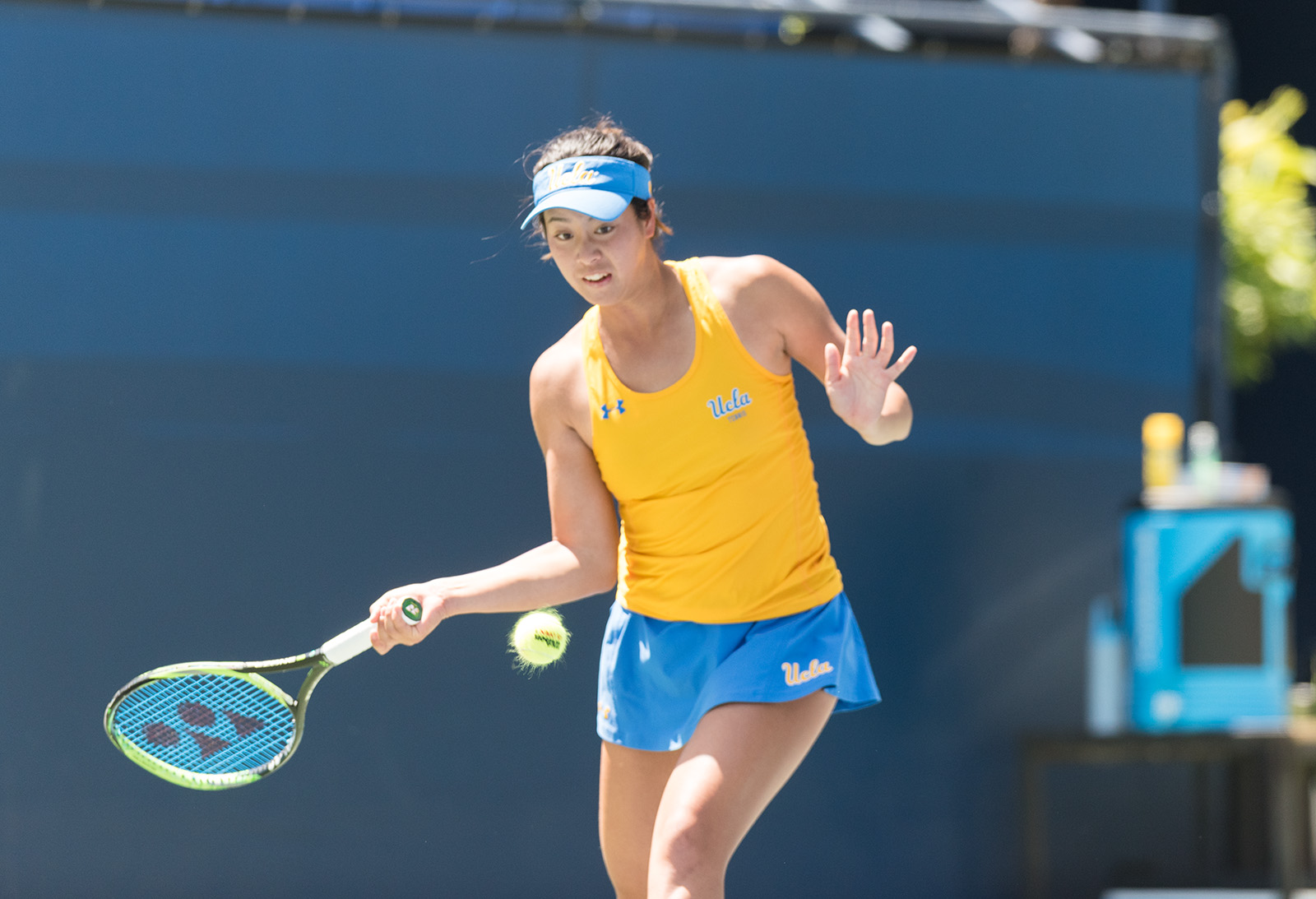 Ena Shibahara did not drop a singles or doubles match this weekend in UCLA’s wins over Arizona State and Arizona. The freshman is ranked No. 16 in singles and and holds a 9-5 dual match record in singles on the season. (Pinkie Su/Daily Bruin)

Sweeps are becoming the norm for the Bruins.

“I think working on our fitness so that we can maintain a high level throughout matches has definitely helped,” said coach Stella Sampras Webster.

UCLA sailed past Arizona State in doubles with wins on court one and three to put the first point on the board.

With the 1-0 lead, the Bruins dropped three of their six first singles sets against the Sun Devils and sent five singles matches to three sets.

“I was making too many unforced mistakes in the the first set and I cleaned it up in the second set,” Hart said. “In the third set, I saw the scores were getting a little close so I really needed to step up and get myself together to take pressure off others.”

After a long match Friday, the Bruins only dropped one set in both singles and doubles against Arizona on Saturday.

“I think the momentum from yesterday definitely carried over onto today,” said No. 16 sophomore Ena Shibahara after the win against the Wildcats.

To open the match, the Bruins secured the doubles point for the 14th time in their last 15 matches.

“The depth throughout the doubles lineup has been really key,” Shibahara said. “I think we all trust each other that we are going to take care of our courts, which lets us play freely.”

Sampras Webster opted to rest No. 113 junior Alaina Miller, who is 11-1 in dual matches on the season, and play junior Gabby Andrews in both doubles and singles.

“We definitely feel good about our three teams, but we also have other options to look at,” Sampras Webster said. “It’s a good problem to have.”

Shibahara cruised to a 6-2, 6-1 win on court one against Arizona’s Devin Chypyha to improve to 19-8 on the season and 9-5 in dual matches on court one.

Her singles win was shortly followed by Hart’s 6-3, 6-3 victory over Mary Lewis to settle the whitewash.

With only two matches left in the regular season, the Bruins look to face Pepperdine in Malibu, California, on Wednesday.