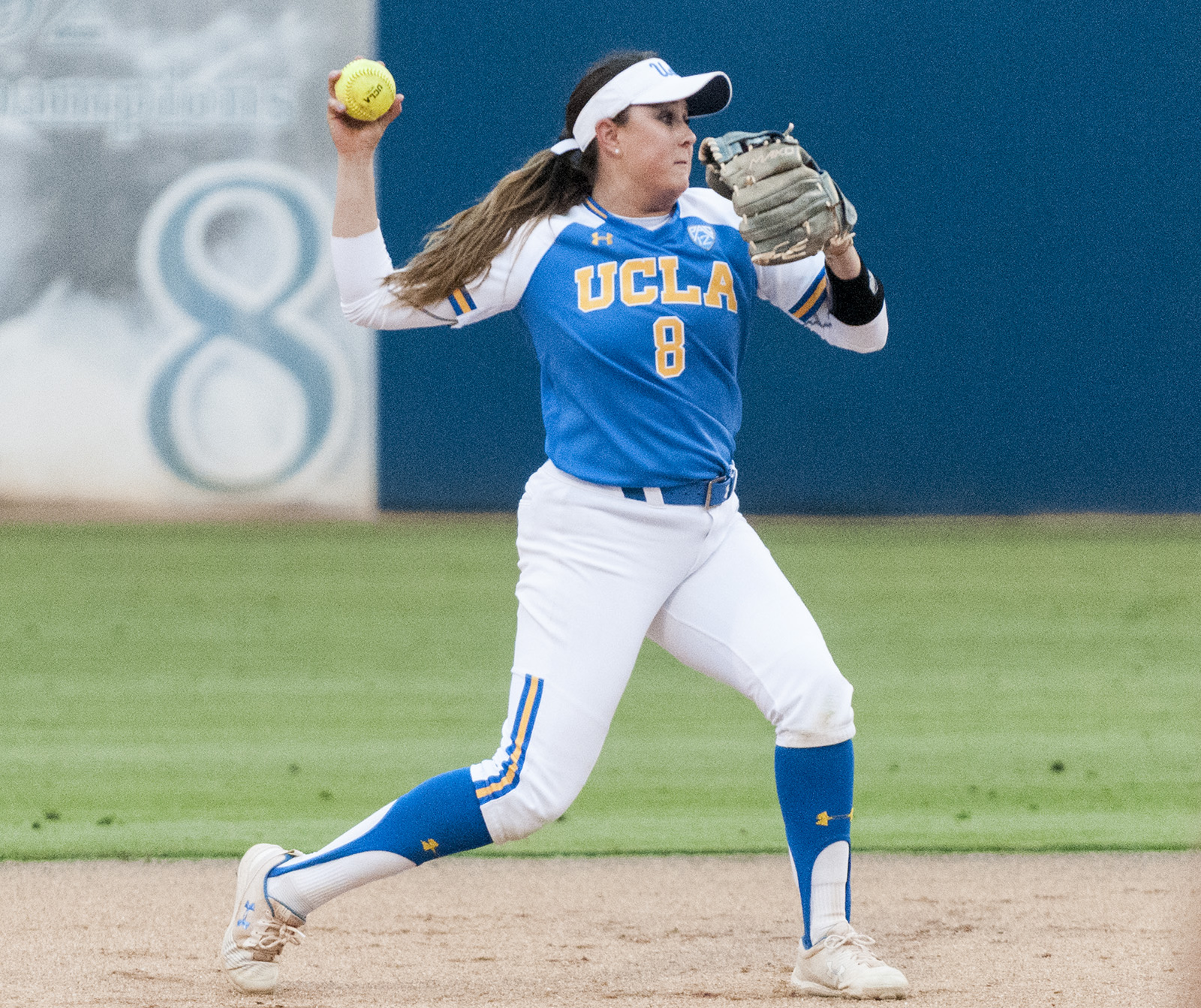 Senior Kylee Perez and the No. 4 Bruins completed their third sweep of Pac-12 play this weekend against the No. 11 Arizona Wildcats. Perez logged seven hits and three RBIs over the course of the three games. (Alice Naland/Daily Bruin)

UCLA softball battled through five ties and seven lead changes in Tucson, Arizona, this weekend for its first and only road series in the state.

UCLA hit seven home runs in the series against Arizona – three of them coming from redshirt sophomore Rachel Garcia.

“Anybody on this team and especially one through nine can hit the ball out of the park,” said senior infielder Kylee Perez. “Everybody was seeing the ball well and the ball flies here, so we took advantage of that.”

Friday’s opener featured something that UCLA hasn’t done before this season – complete a comeback win late in the game.

The Bruins scored in the second frame as well as the fifth, but for each run they scored, the Wildcats responded with two runs in the next half inning, making the score 4-2 after five. In the sixth, the Bruins forced the third tie of the game with a missile to right center field off Garcia’s bat.

UCLA saw its first lead of the game since its opening score in the seventh. An RBI double from Perez and two RBI singles from juniors Brianna Tautalafua and Jenna Crawford pushed the lead to three. A 2-run home run from first baseman Alyssa Palomino pulled Arizona within a run, but that would be all the Wildcats would score as the Bruins took game one of the series 7-6.

On the day, Garcia hit two home runs making it her first two-home run game of her collegiate career. Seven Bruins collected the team’s nine hits of the night and Garcia and Perez led the way with two apiece.

Garcia rode that momentum on both sides of the field into Saturday’s contest, where she threw three shutout innings with six strikeouts, while collecting three hits at the plate.

She shared the circle with freshman pitcher Holly Azevedo. Azevedo turned in four innings of work with four strikeouts, 1 earned run, five hits and one walk.

On offense, UCLA had 11 hits from seven different players.

“This lineup is incredible,” Garcia said. “If one person doesn’t get it done, the person behind you has your back … no matter where we are in the lineup. All of us are on a roll.”

Two Bruins tied for the team high in hits Saturday. Garcia was 3-for-4 with an RBI while redshirt freshman outfielder Aaliyah Jordan finished 3-for-4 and scored twice. In the sixth,  junior catcher Paige Halstead connected on one that went halfway up the batter’s eye in center for her first home run of the year.

Arizona put another run on the board in the seventh after outfielder Jenna Kean scored on an error after leading off the inning with a triple. But, that run would be all Azevedo would allow, as she retired the next three batters for UCLA to seal game two and the series 7-3.

Garcia stayed hot at the plate with a line drive that snuck over the right center field wall for a 3-run home run in the opening frame – her eighth of the year. In the circle, she came in relief for the third day in a row. She pitched 4 1/3 innings, striking out nine, allowing two hits and no runs.

UCLA had six players who drove in at least one RBI on Sunday. Jordan continued to be productive, driving in her 52nd and 53rd RBIs of the season. Arizona could not get Perez off the bases as she went 4-for-4 on the day, pushing her batting average to .429.

Senior pitcher Selina Ta’amilo took the ball for the finale and pitched for 1 2/3, innings allowing 3 runs on two home runs before Garcia entered in relief. Azevedo came in for the final frame and and only gave up one hit before getting the last three outs en route to a 10-3 win.

“We came off a weekend (against Stanford) where we didn’t finish strong and that wasn’t UCLA softball,” said coach Kelly Inouye-Perez. “I’m always very proud to see the team come out on the road with the tradition, like the UCLA-Arizona series, and proud of the way the team was playing with purpose and playing to win.”