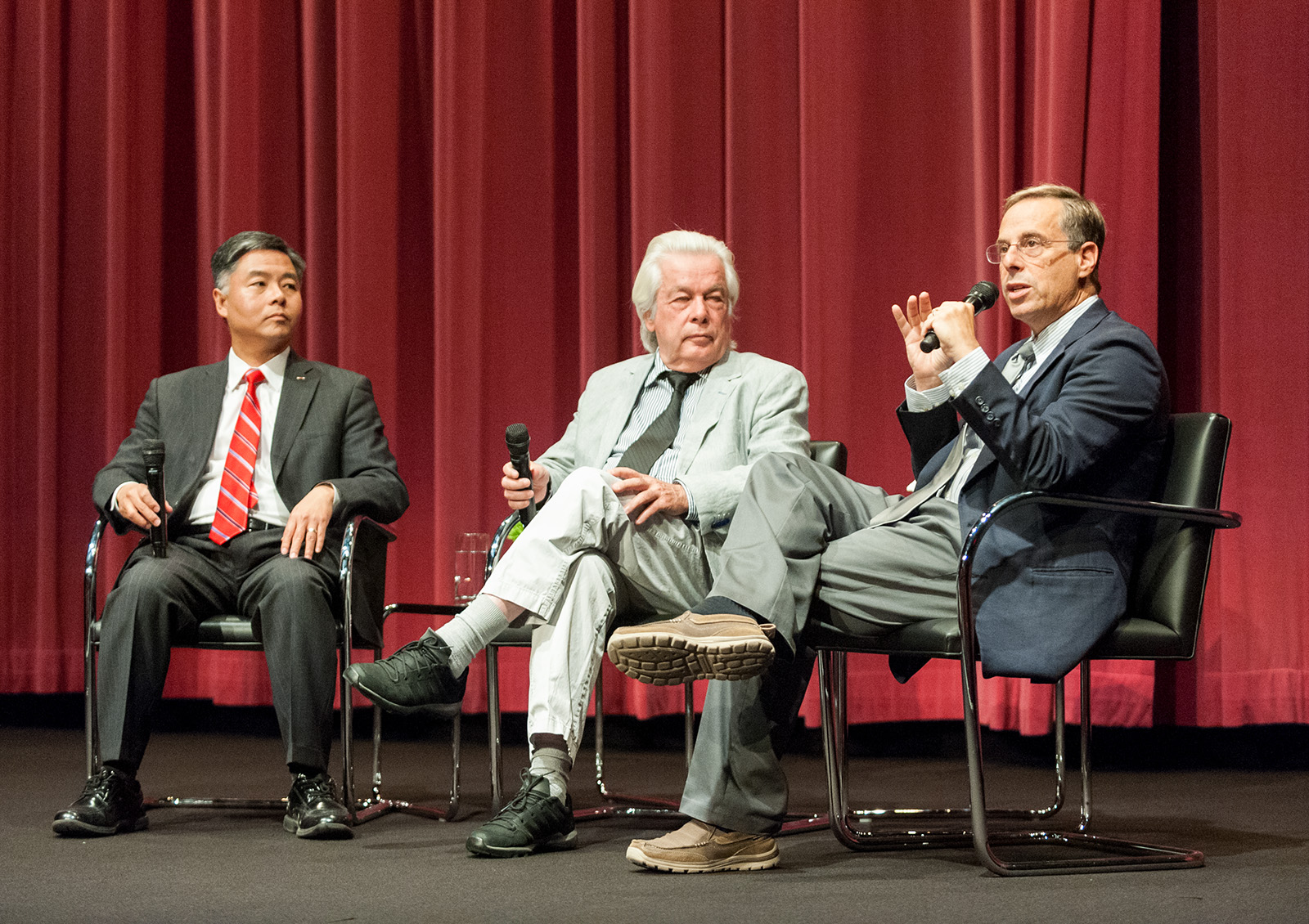 Congressman Ted Lieu and Harry Litman, former U.S. Attorney and Deputy Assistant Attorney General, spoke at an event at the Hammer Museum about Trump’s awareness of Russian interference and the future of Robert Mueller’s investigation. The panel was moderated by Ian Masters, a journalist and radio show host. (Ryan Leou/Daily Bruin senior staff)

The congressman who represents UCLA and Westwood said at an event Sunday he thinks the alleged Russian interference in the 2016 presidential election will help Democrats overturn Republican seats in the 2018 Congressional midterm election.

The event was at the Hammer Museum and covered topics such as Trump’s awareness of Russian interference and the future of Mueller’s investigation.

Lieu, a Democrat who serves on the House Judiciary and House Foreign Affairs committees, was one of the representatives who wrote a letter to the U.S. Department of Justice last year calling on it to investigate Trump’s ties with Russia.

He also co-authored legislation Thursday preventing the firing of special congressional appointees because of rumors that Trump may fire Mueller or Deputy Attorney General Rod Rosenstein, who appointed Mueller.

“Why (is) Congress introducing these bills? It’s because we understand this president thinks lawlessly; we just want to make sure he does not act lawlessly,” he said.

Lieu added even if Mueller was fired, career professionals and special agents will continue to investigate whether the Trump administration was involved with the Russian interference in the 2016 presidential election.

“Just because you replace someone at the top doesn’t mean you can stop this investigation,” he said. “The train has left the station.”

Lieu said he thinks Russia may have interfered in the election through targeted cyberattacks and influence campaigns.

“We know that if you put certain slogans, images and ideas in front of people on a repeated basis, it has an appreciable effect, and the Russians knew this,” he said.

Harvey Wasserman, a historian and activist who attended the event, said he thinks the speakers were knowledgeable and helped convince him Mueller’s investigation could have tangible results.

“I think it’s 50-50 that he will finish his first term,” Wasserman said. “I think actually he’ll resign at some point because the case is overwhelming.”

Laurie Maldague, a Santa Monica resident, said she thinks Lieu and Litman were helpful in breaking down major points of the investigation.

“A lot of us don’t have time to delve into all of these important subjects that are swirling around us because daily life is absorbing,” Maldague said.

Lieu said he is concerned about potential meddling in the 2018 midterm election, but is confident the members of the Department of Homeland Security, Federal Bureau of Investigation and other intelligence agencies will prevent it.

“If you’re an elected official or a secretary of state, you do not want your election getting hacked, regardless of what crazy thing the president may or may not believe about Russian meddling in the election of 2016,” he said. “It is clear everyone else did, and will do, everything to not let that happen.”