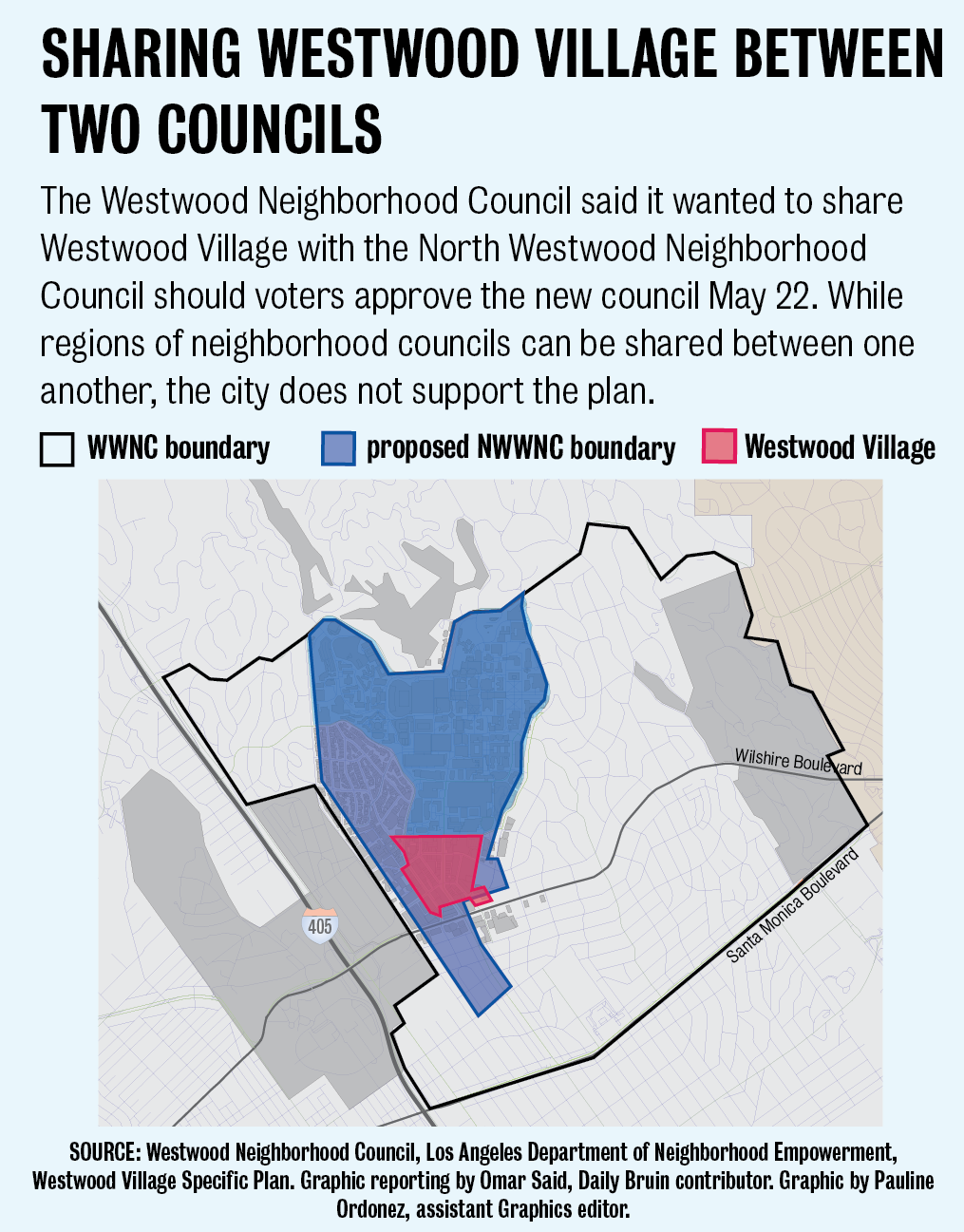 The council unanimously passed a motion to designate the Village a shared resource between the current council and the proposed North Westwood Neighborhood Council. Westwood Forward, a coalition of students, homeowners and business owners, submitted an application to form the new council in December, and voters can decide whether to approve the council’s formation on May 22.

If approved, the new council would split from the current council and consist of UCLA, Westwood Village and the North Village. Currently, the Westwood Neighborhood Council oversees a larger region of West Los Angeles, including the Persian Square community and Holmby Hills, in addition to the areas within the boundaries in Westwood Forward’s council proposal.

Sandy Brown, council vice president and Westside Regional Alliance of Councils representative, introduced the motion after submitting a letter to the Department of Neighborhood Empowerment, the city department that oversees neighborhood councils, requesting the Village be made a shared resource.

According to the department’s plan for city councils, neighborhood council boundaries cannot overlap unless the overlapping area is intended for public use, like a school, police station or park, or contains a cultural or historically significant landmark.

Brown said the department and the city attorney’s office rejected the council’s proposal to share the Village, but added she thinks the city was unclear about its reasons for the decision.

Gibson Nyambura, a neighborhood council advocate from the department, said although the Village contains some landmarks within its area, the department and the city attorney could not consider the entire Village a shared area. He added a newly formed North Westwood Neighborhood Council and the current council could consider shared boundaries should Westwood Forward be successful in its May vote.

“If Westwood Forward wins the election to form a new council, the Board of Neighborhood Commissioners will do a boundary adjustment, during which both councils will have an opportunity to bring things like this up,” he said.

Although the council approved the motion despite disagreeing with the city’s ruling, the boundaries cannot be officially changed without city approval.

Michael Skiles, president of the Graduate Students Association and a member of Westwood Forward, said he thinks the council’s vote was an attempt to undermine the coalition.

“I want you to know that this is yet another attempt to cloud the election and prevent your constituents from exercising their right to make a democratic decision,” Skiles said. “This is petty, and the city has already told you this is illegal, and yet you continue to try and do it to cast a dark cloud over the election and discourage your constituents ahead of this election.”

“We’re not stupid here, we know that Mayor (Eric) Garcetti wants to get the city to a hundred neighborhood councils,” Chapman said. “I’m totally fine with (Westwood Forward) having a neighborhood council, I think they should have one for the students, but this has become a free-for-all.”

Former council president Jerry Brown said he thinks Westwood Village is a public-use area and believes the city attorney’s decision should be overturned.

Voting locations have yet to be decided. All stakeholders are eligible to vote if they attend classes, work or operate within WWNC’s boundaries for any other reasons. Voters need to self-affirm their stakeholder status in order to cast their ballots.