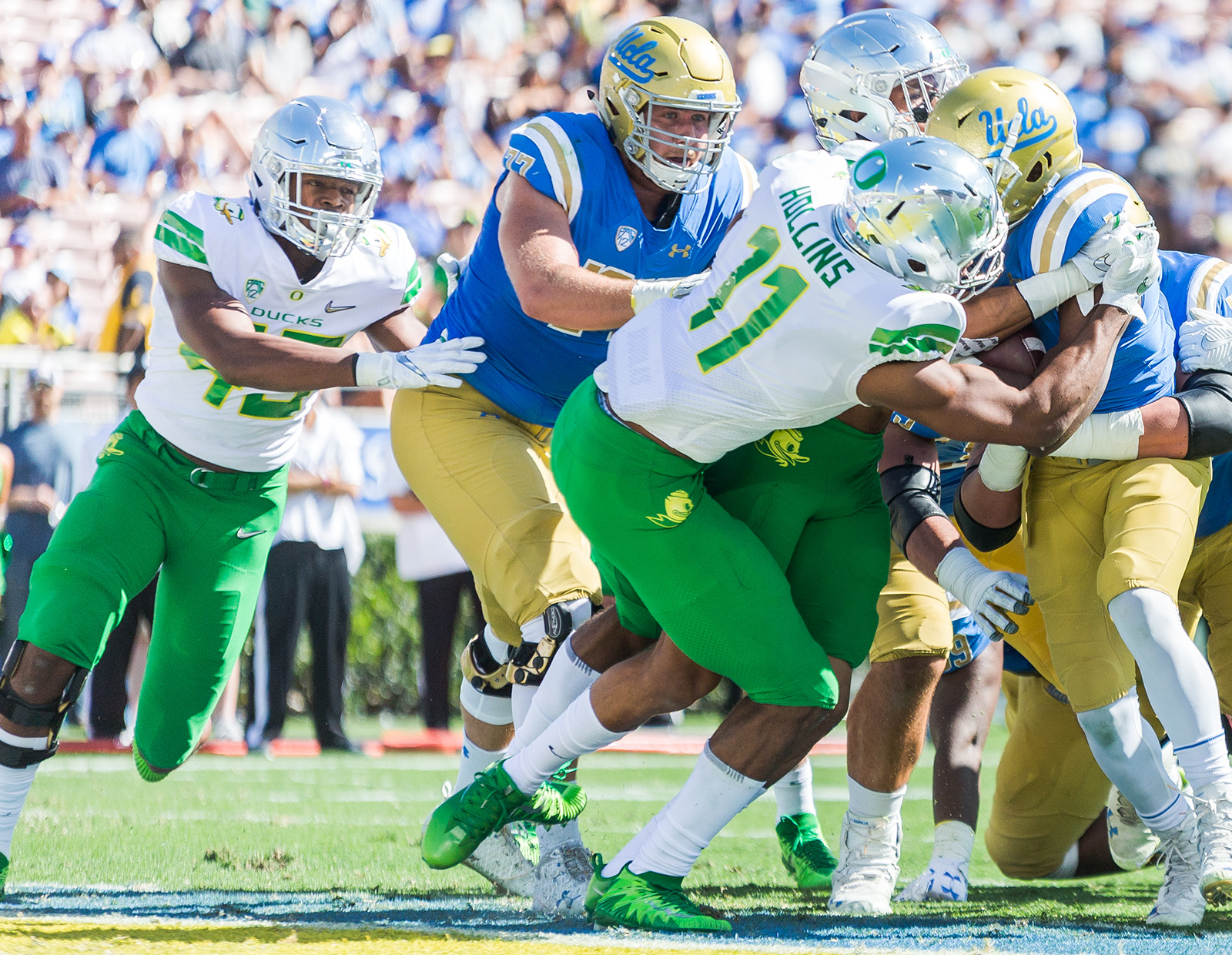 Kolton Miller is in line to be one of UCLA’s next pro offensive lineman – joining a deep history of Bruins to make it to football’s highest level at that position – but the 2019 offensive line picture is still unclear. (Aubrey Yeo/Daily Bruin senior staff)

UCLA football boasts a rich history along the offensive line.

The program, which churned out three All-Americans on the line in the 1990’s, has seen at least one lineman selected in the NFL draft in three of the past four years.

And another two, tackle Kolton Miller and center Scott Quessenberry, are expected to be chosen in this month’s draft. Miller, one of just 22 players who will attend the draft, is a potential first-round pick.

But entering 2018, UCLA’s line looks like a potential weakness.

Only two starters will return: rising redshirt junior tackle Andre James, who will move from the right side to the left, and rising redshirt sophomore right guard Michael Alves.

It’s a far different look than last fall, when the Bruins started the same five guys up front in every game. Gone are Miller and Quessenberry, along with guard Najee Toran.

New offensive line coach Justin Frye also got a late start with the group, with previous coach Hank Fraley departing in the middle of February. Frye spent the last 11 seasons at Boston College.

Of course, the concerns may be overdone.

New head coach Chip Kelly won plenty of games in his stint at Oregon with lines full of unheralded recruits and positional converts. Kelly, for what it’s worth, did not express much concern about the line when asked over the weekend.

“Same as everybody, it’s a work in progress,” he said. “They’re all trying to learn systems, get adjusted to new coaches.”

Kelly’s fast-paced scheme requires physical fitness, but extensive offensive-line experience is not as helpful as in other systems.

“The first day (of spring camp), they didn’t really have set starters,” Burton said. “After the first few days, (Frye) just said, ‘Just keep working your butt off and things will work out for you.’”

It hasn’t always been pretty. The defensive line routinely dominated the offensive line early in camp, and more than a few snaps have missed the quarterback’s hands.

“That’s where you build your team chemistry – working your butt off and grinding through some tough times,” Burton said. “The (offensive) line has come a long way since the first day.”

Even for Wariboko-Alali, who saw time as a reserve last fall, the spring has been an adjustment period.

“They threw me in the fire and I’ve just been picking it up and running with it,” Wariboko-Alali said. “Obviously, at UCLA, we’ve had a great history of offensive linemen, even going to the NFL. It’s just a dream come true, really.”