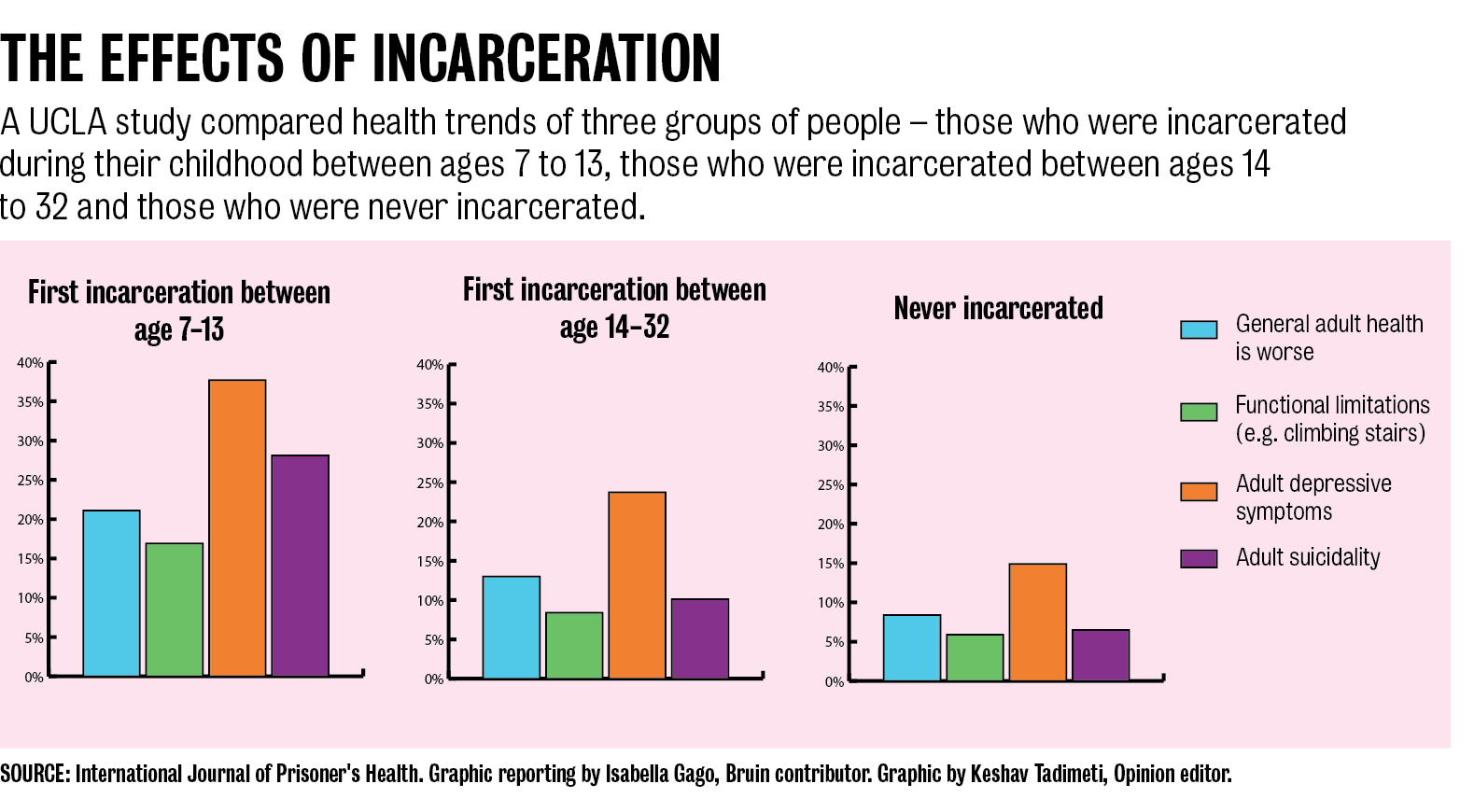 Individuals who were incarcerated as children are more likely to be vulnerable to mental and general health complications later in life, UCLA researchers found.

People who were incarcerated in their childhood were also predominantly black or Hispanic, male and of a lower socioeconomic status, the study found.

Laura Abrams, professor and chair of the social welfare department and an author of the study, said she was surprised by the large difference in data for the two incarcerated groups since it shows that incarceration before reaching adolescence can be correlated with poorer general and mental health.

“It reinforces a need to treat children differently from adolescents and adults in a trial,” she said.

Elizabeth Barnert, assistant professor of pediatrics and co-author of the study, said the fact that a trend was discovered despite the small sample size emphasizes the relationship between age of first incarceration and negative adult health outcomes. The sample pool comprised more than 14,000 individuals, with 56 incarcerated before age 13.

“It is amazing we found as much as we did with a small sample size,” she said. “That speaks to the magnitude of the relationship.”

Even though the study shows a statistical trend between childhood incarceration and poor general health in adulthood, it cannot prove that incarceration is the sole cause, Barnert added.

“We can see associations between child incarceration and medical vulnerability, but we can’t prove causality,” she said. “We can’t tell if the problems occurred before, during or after incarceration.”

In the report, authors also suggested legislators use comprehensive health and social services as substitutes to incarceration or allow incarcerated children access to such programs, because children may already have mental health needs that imprisonment may aggravate.

Anthony Williams, a doctoral student in sociology and member of the Underground Scholar Initiative, said he thinks these types of studies can help influence public policy. USI is a student group that provides academic resources and support to students who were either incarcerated or have had family members experience incarceration.

“People who have been incarcerated know that prisons are places of torture and are familiar with this information,” he said. “But I realize there are folks who need quantitative and qualitative data to know what is going on.”

Abrams said she hopes the findings will encourage states to use incarceration as a last resort when trying children for crimes.

“There are a couple measures pertaining to juvenile injustice and we think our findings support raising the age of juvenile jurisdiction,” she said. “Our findings go with the momentum of keeping young people out of incarceration when possible.”

Barnert said it is important to help children by providing mental and general health services to them throughout their lives.

“We cannot pinpoint when in their lives they will need help the most since we were not able to identify (from the study) when poor health started,” she said.