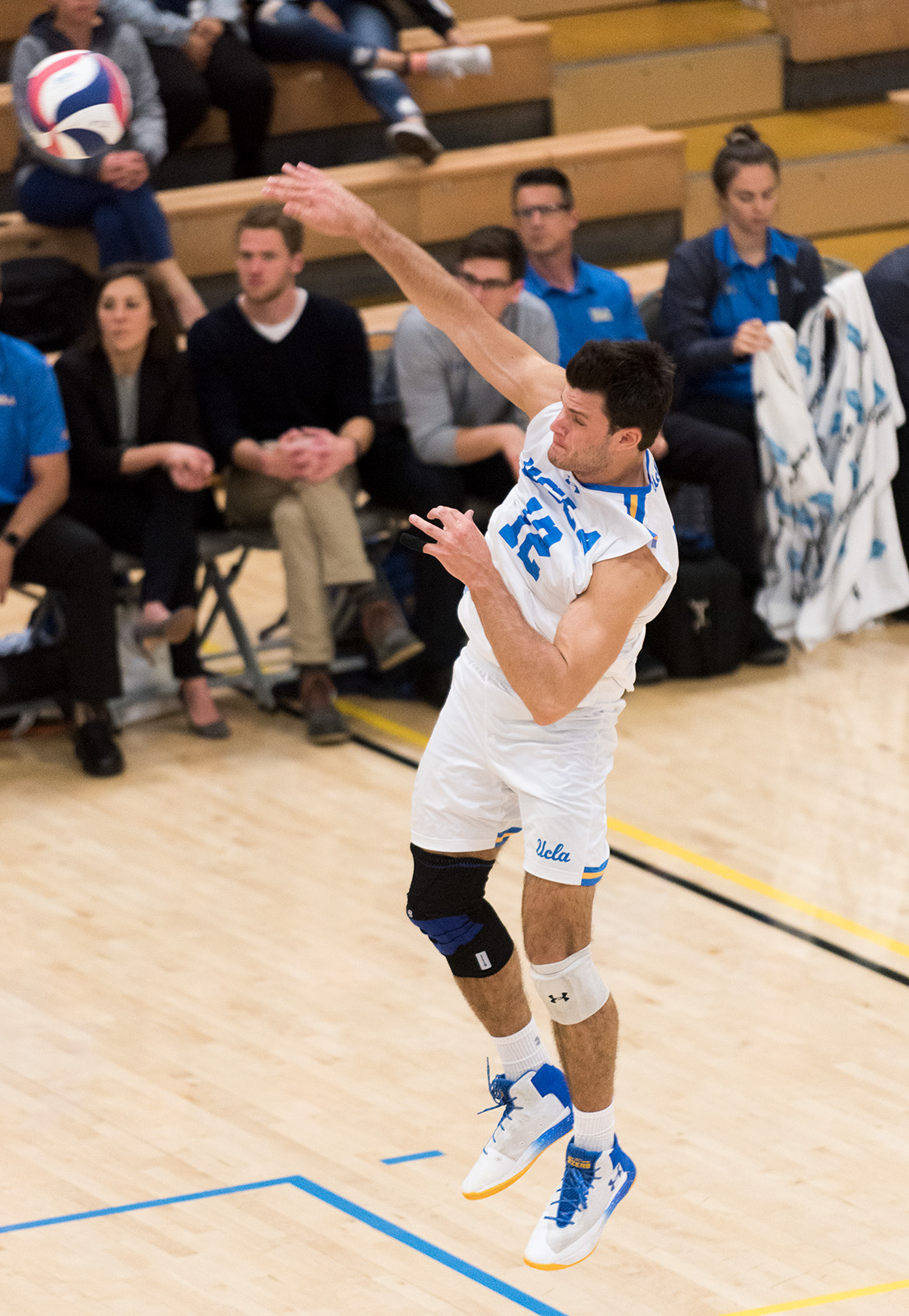 Dylan Missry has been an integral part of the Bruin offense this year. The junior outside hitter is third on the team with 218 kills and 35 aces on the season. (Pinkie Su/Daily Bruin)

A difficult road lies ahead for the Bruins to claim their 20th national championship.

The No. 2-seeded Bruins will host unranked Stanford (6-19, 3-9), seeded seventh, in the MPSF tournament quarterfinal at Pauley Pavilion on April 14.

“When we played Stanford earlier this year, they were missing a few of their key guys,” said senior opposite Christian Hessenauer after the USC loss. “They’re back and they’ll be ready to battle us so we’re going to have to be ready for that.”

UCLA began the season undefeated, winning seven games in a row, including a five-set win over the defending national champions, No. 7 Ohio State (20-5, 11-3 MIVA). The Bruins hit for .345 in that stretch, with Hessenauer emerging as a core component of the offense.

Hessenauer finished the regular season with 321 kills – the most on the team – and a hitting percentage of .329. In his junior season, his usage was limited by other senior members of the team – he logged 107 kills and hit .282.

UCLA’s streak was broken in a three-set loss to No. 6 Hawai’i (17-6, 5-3 Big West). The Bruins would split the series against the Rainbow Warriors before returning home to log six wins in a row, four of which were sweeps.

UCLA played No. 1 Long Beach State (23-0, 8-0 Big West) twice in under a week, losing both games 1-3. The 49ers have held the No. 1 spot in NCAA rankings for most of the season and are seeded first to claim the Big West automatic bid. Long Beach State leads the nation in hitting percentage with .393 and has reigning Player of the Year in outside hitter TJ DeFalco, who is hitting for .395 this year and finished the regular season with 268 kills.

Hessenauer missed the rematch against Long Beach State because of a knee injury. The senior was also absent in the Bruins’ third loss of the midseason losing streak, in which No. 5 and third-seeded Pepperdine (15-7, 8-4 MPSF) swept UCLA in three sets. Coach John Speraw said the team has moved on from that patch in the season.

“We are probably better in every single facet of the game. It was a long time ago (and) that stretch in the season was tough for us,” Speraw said. “Now we’re seeing some improvements and hopefully it’ll be enough for us to push forward.”

Following a loss to No. 1-seeded BYU in Provo, Utah, UCLA won seven of its last eight games. Sophomore middle blocker Daenan Gyimah emerged as an offensive threat in that stretch, averaging 9.75 kills per match. Gyimah finished the regular season as the most efficient player in the nation, hitting for .534.

A late loss came against sixth-seeded and unranked USC (7-19, 3-7) – the first time UCLA had lost to an unranked team since 2014. Junior outside hitter Dylan Missry said the team still has work to do off the court and needs to remain consistent.

“We did everything OK and nothing really well enough to give us the victory,” Missry said. “We need to work on everything – serving, passing, block.”

The Bruins saw some strong competition in the regular season, ranking second in RPI rankings. With only six teams selected to compete in the MPSF tournament, however, the teams they face will continue to be some of the best in the nation.