UCLA advances to Elite Eight with 84-75 win over Texas 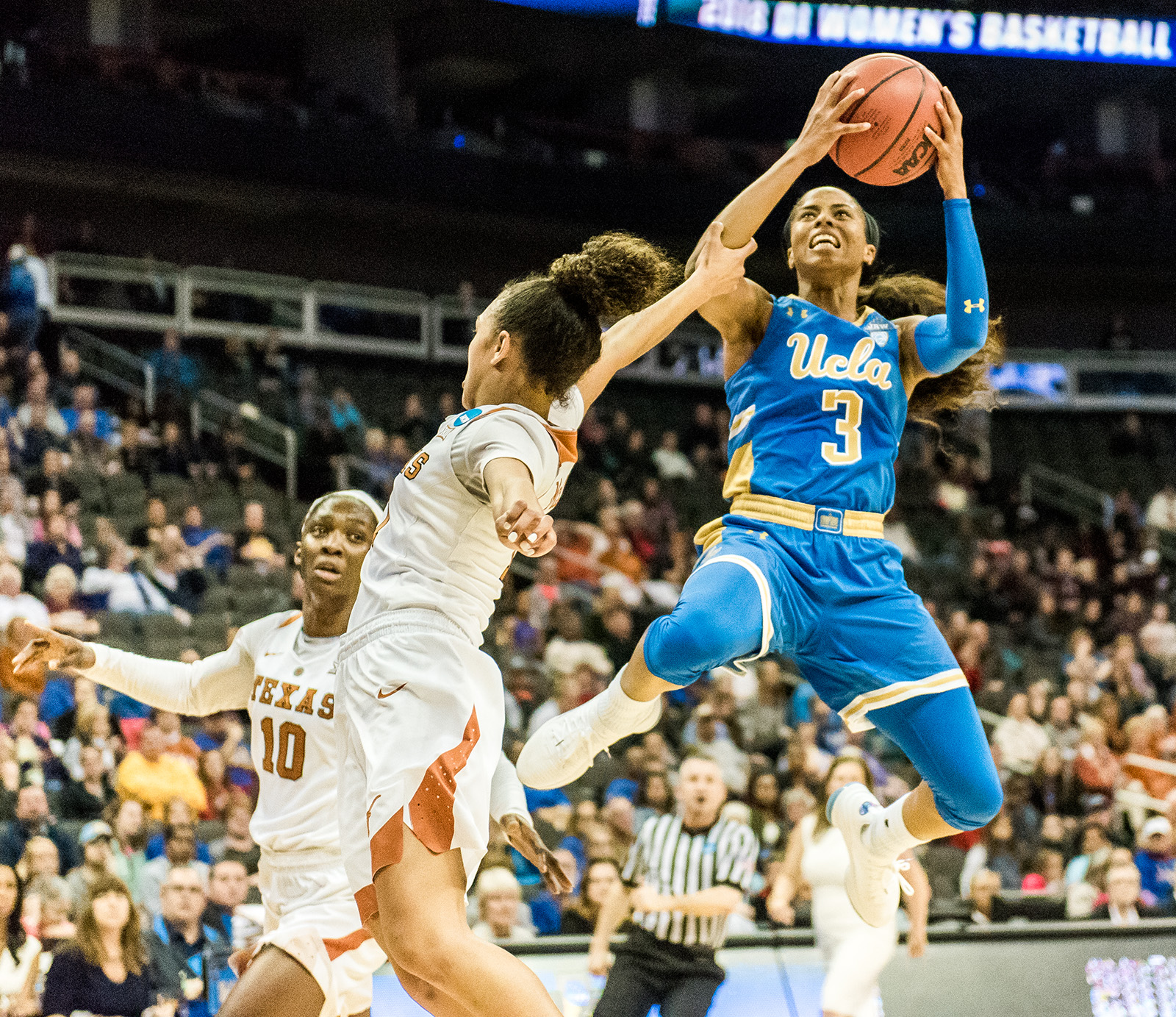 Senior guard Jordin Canada scored 22 points and dished out eight assists in UCLA women’s basketball’s Sweet 16 victory over Texas on Friday night. The Bruins will play for a shot at the Final Four on Sunday against Mississippi State. (Axel Lopez/Daily Bruin)

KANSAS CITY, Mo. – The Bruins’ senior class accomplished something the program has not been able to do since 1999.

No. 3-seeded UCLA women’s basketball (27-7) upset No. 2-seeded Texas (28-7) 84-75 on Friday night. Seniors guard Jordin Canada, forward Monique Billings and guard Kelli Hayes finally led the Bruins to the Elite 8 after failing to do so the past two years.

“The joy I got to see in these players’ faces was priceless,” said coach Cori Close. “I’m not sure I’ve seen (Canada) and (Billings) smile that big.”

The Bruins outrebounded the Longhorns 38-34, something Close said she was most worried about coming into the game. She emphasized that UCLA needed rebounding from guards in order to stay in the game.

“I didn’t expect to play (zone) as much as we did and the reason was I was worried about our guard rebounding,” Close said. “(But) they did a heck of a job.”

The Bruins had 15 of their 38 rebounds come on guards crashing the weak side, which Close said ultimately allowed the team to play more zone defense.

UCLA’s defensive pressure both in the half-court and full-court forced the Texas into throwing up well contested shots. In the first quarter, the Longhorns shot just 5-of-16 from the field, while the Bruins went 9-of-16.

UCLA’s suffocating zone forced 21 turnovers in the game and converted them into 31 points.

“We knew we were going to rely on our defense and that defense was going to carry over to offense,” Billings said. “We wanted to set the tempo early (and) I thought our guards did that – pressuring the ball.”

Billings led the way in the first quarter with 8 points, going 4-of-6 from the field. She also had a defensive spurt, getting deflections and forcing travels in the paint, and finished the night with 17 points and eight rebounds.

Texas strung together a 9-0 run out of halftime, as four different Longhorns scored to give the team its first lead of the night. Senior guard Jordin Canada went 0-of-7 until a 3-pointer in the third quarter ended her dry spell.

“My shots weren’t falling so I tried to get my teammates involved in the first half and in the second half let everything come to me,” Canada said. “When they came out on their run, I didn’t have any doubt, (because) we’ve been here before.”

UCLA fell to Texas in the 2016 regional semifinals. The game left a bitter taste for the current senior trio after letting a fourth-quarter lead slip away – something they would not forget going into tonight’s matchup.

“This was our game, and we knew it” Hayes said. “It was payback for two years ago. … We stuck together (this time) …  and I think the maturity that our team has developed this year is really what helped us.”

The Longhorns led by as many as 3 points in the third period, but Canada knocked down four straight shots to ignite a 17-4 run that gave UCLA a 59-49 lead at the end of the quarter.

“Last time (Canada) tried to put everyone on her back, and … when everyone panics is when she said ‘I’ve got to do this by myself,’” Close said. “I thought she showed so much maturity (tonight).”

In the final quarter, both teams exchanged runs down the stretch. Guard Ariel Atkins and Alecia Sutton drained back-to-back 3s to cut the deficit to 4 points with 1:57 left in the contest.

But Canada was unstoppable in the second half. The senior had only scored 2 points on a pair of free throws in the first half, but exploded in the second half to finish the night with 22 points and eight assists.

The Bruins played zone most of the game, but switched to man defense in the final minutes of the final period. The switch-up on defense forced Texas to miss just its second field goal of the quarter and propelled a 6-0 UCLA run to seal the deal.

“(Junior transfer guard Japreece Dean’s) defense was key for us and we were able to mix our defenses because of how well she was playing,” Close said.

Close also said she thought junior guard Kennedy Burke, who had 15 points and five rebounds, was one of the biggest differences in the game.

“(Canada and Billings) have been consistent all year long at being dependable and showing up and giving their best when they’re best is needed, but I knew it was going to come down to other people,” Close said. “This one right here – I thought (Burke) was the difference in the game, her aggression, her confidence, her ability to communicate with her teammates and influence plays.”

“It’s been a journey and we’re not done yet,” Billings said. “We can’t get too high from this game. It’s exciting, but we have to focus on the next game and the next match-up: Mississippi State.”

The Bruins will face No. 1-seeded Mississippi State on Sunday in the regional finals to have an opportunity at their first ever Final Four.