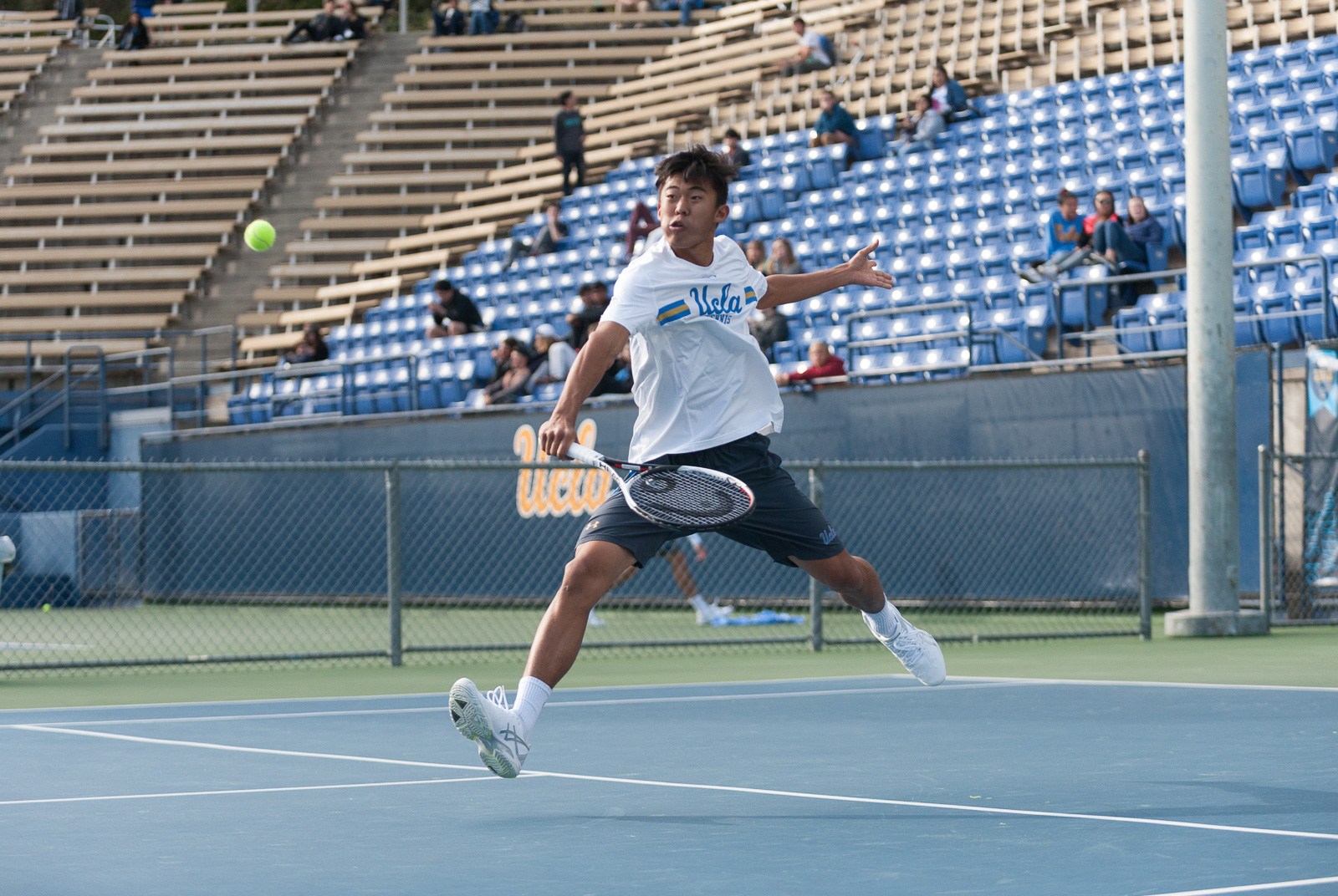 Despite dropping his doubles match on court one with senior Martin Redlicki, sophomore Evan Zhu won in straight sets in singles on court two against his Oklahoma opponent. Zhu posts a 9-5 singles record on the season. (Alice Naland/Daily Bruin)

Despite dropping their second straight doubles point, the Bruins prevailed.

“The character is tested on teams when you lose that doubles point,” said coach Billy Martin. “It’s always tough, (but) they showed great resiliency and just took it upon themselves to not get too down and just come out and do their job.”

Coming off their own six-match win streak, the Sooners took a quick lead in doubles. Alex Bakshi and Jake Van Emburgh defeated senior Martin Redlicki and sophomore Evan Zhu 6-2 on court one and Ferran Calvo and Adrian Oetzbach took down the No. 24 pair of senior Austin Rapp and freshman Keegan Smith 6-3 on court two.

“We definitely need to come out more ready for doubles,” Zhu said. “But after we drop it, we just have to forget it and focus on (our) own court.”

In singles, the Bruins rebounded, taking home five of the first six sets.

“That gave us all energy,” Martin said. “When the guys look up on the scoreboard, it makes us really believe we can win the match.”

No. 3 Redlicki quickly won on court one against No. 91 Bakshi in straight sets to even the match at 1-1. Freshman Connor Hance and No. 117 Zhu also took home straight-set wins to get UCLA within one point of clinching the match.

After winning the opening set on court four, No. 62 senior Logan Staggs had an opportunity to upset No. 40 Calvo in straight sets for the win – and he did just that.

The matches played out on courts three and five, as Smith took home a win over No. 85 Van Emburgh and junior Maxime Cressy fell to Max Stewart, marking the Sooners’ only singles win of the day.

“We all were just playing better than they were,” Hance said. “In the end, it didn’t even look like we made a comeback at all. We just kind of took control.”

This win sustains UCLA’s undefeated record at home this season. The Bruins have not suffered a loss at home in two years and Martin said he expects no different this year.

“It’s the way it should be,” Martin said. “If you’re going to beat us anywhere, it’s not here.”

UCLA will get 12 days off before its next match against UC Irvine at home March 27.