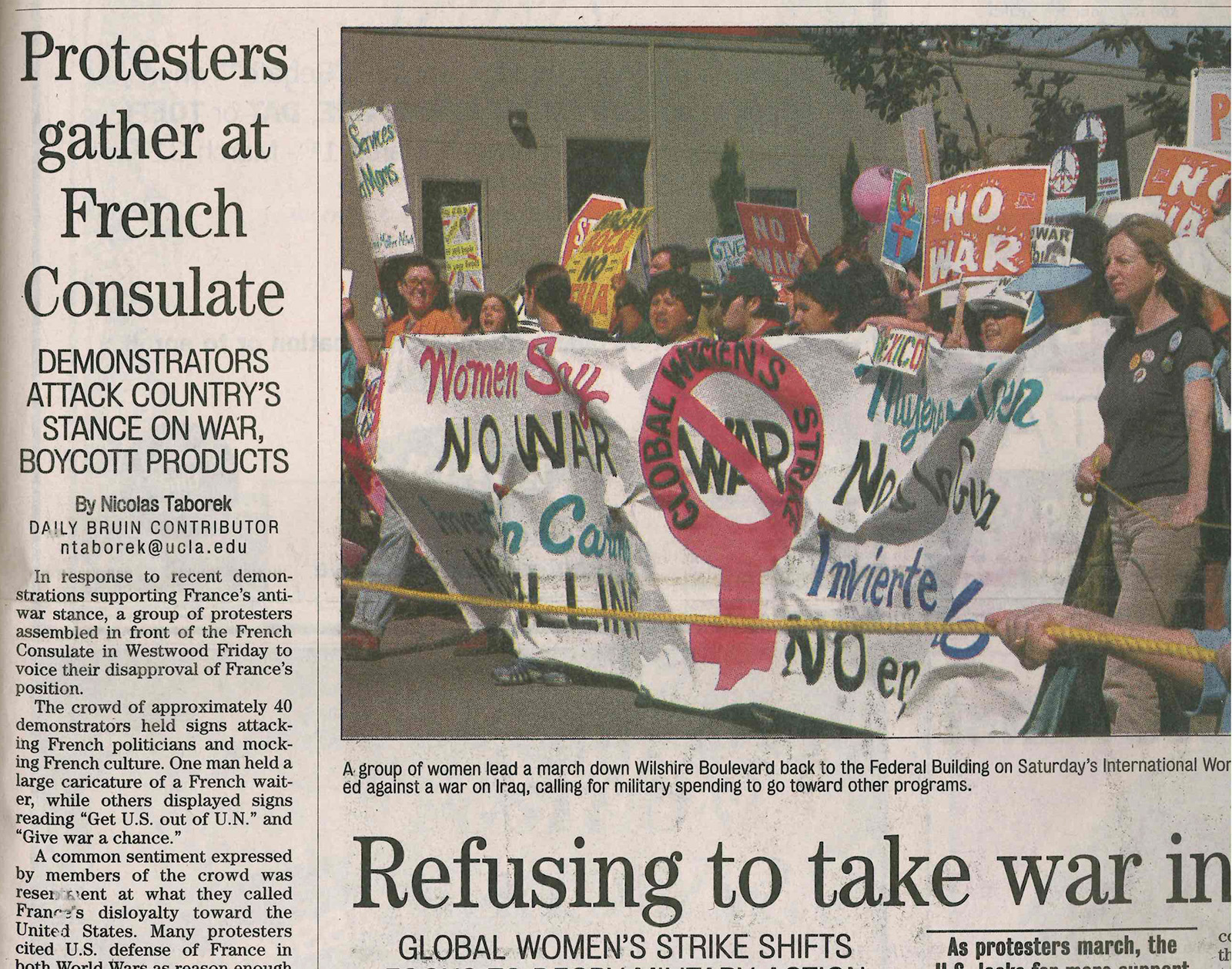 If you’ve ever felt stupid, look on the bright side: At least you haven’t poured wine onto roads over the French not supporting the Iraq War.

March 19 will mark 15 years since the U.S., along with its coalition forces, began its war on Iraq. Anti-war protests were widespread in the lead up to the invasion, but supporters of the war also made themselves heard, directing their ire against the French for objecting to the invasion. Their methods included actions as laughable and embarrassing as introducing “freedom fries” to replace french fries, as a way to stick it to the French.

And here near UCLA, war-supporting locals had the perfect target for their anger – the French consulate in Westwood.

On March 10, 2003, the Daily Bruin reported that a number of demonstrators gathered in front of the French consulate to protest France’s opposition to a potential invasion of Iraq. The 40-odd protesters held signs mocking the French and criticizing their politicians. One sign contained a caricature of a French waiter, while another declared “Give war a chance,” as if the world doesn’t usually give war a chance.

Demonstrators speaking to The Bruin cited French disloyalty as the reason for their protests.

“France has depended on the people of the United States twice to defend them from rogue governments,” said Chad Morgan, one of the organizers of the event, in a press release. “Now, when we need to defend ourselves, they oppose us.”

Morgan was probably referring to claims from the U.S. government that Iraqi leader Saddam Hussein was stockpiling weapons of mass destruction. Coalition forces did not find such weapons.

He added that his organization, the California Young Americans for Freedom, organized a boycott of French products. The blacklisted French brands included Club Med, Sparkletts water, Motel 6, Michelin and even the cosmetics brand Maybelline.

Given that Maybelline is still a successful brand, it’s safe to say that Morgan’s boycott of its makeup products had little effect.

The quirkiest part of this demonstration was how attendees chose to bring attention to their boycott: by pouring French wine out of bottles onto the street.

This was a massive self-own for several reasons. First off, demonstrators would have spent a fair amount of money on wine bottles, making this a costly way to express disapproval over foreign policy. Secondly, by buying French wine bottles for this charade, they were handing over money to French companies and technically violating their own boycott. And let’s not even get to how the invasion they were pouring wine over and protesting in favor of would create a gaping political vacuum in Iraq and eventually let the terrorist organization, the Islamic State group, flourish across Iraq in the early 2010s.

To top everything off, The Bruin reported that a visibly intoxicated demonstrator was shouting “Drink Napa Valley.” Now that’s a chant that more Americans could probably get along with.

There were also some UCLA students involved, including members of Bruin Republicans. The most notable one was now-famous conservative pundit Ben Shapiro. Shapiro at the time was a third-year political science student, unsurprisingly, and a former Daily Bruin opinion columnist. He declared that the invasion was a morally clear objective, and specifically said it would not increase anti-American sentiment or lead to an increase in the threat of terrorist attacks.

“The people that don’t like us simply don’t like us,” Shapiro said. “Our security should be in our own hands.”

15 years later, now that the Islamic State group has carried out multiple attacks across the world, the only thing clear is that Shapiro was way off mark.

But we can take comfort in the fact that there are absolutely zero consequences for being as humanly wrong as possible. Shapiro is now the editor-in-chief at conservative news outlet The Daily Wire and is a popular figure on social media. He’s even indicated as recently as 2016 that invading Iraq was the right decision.

The protesters got their way, with the U.S. invading Iraq less than two weeks later. With the destruction and political instability the invasion would eventually bring to the Iraqi people, it’s evident the war was a mistake. According to a study, nearly half-a-million Iraqi civilians died from war-related causes between 2003 and 2011.

But that’s probably something pundits like Shapiro and wine-pouring demonstrators won’t ever have to contend with.