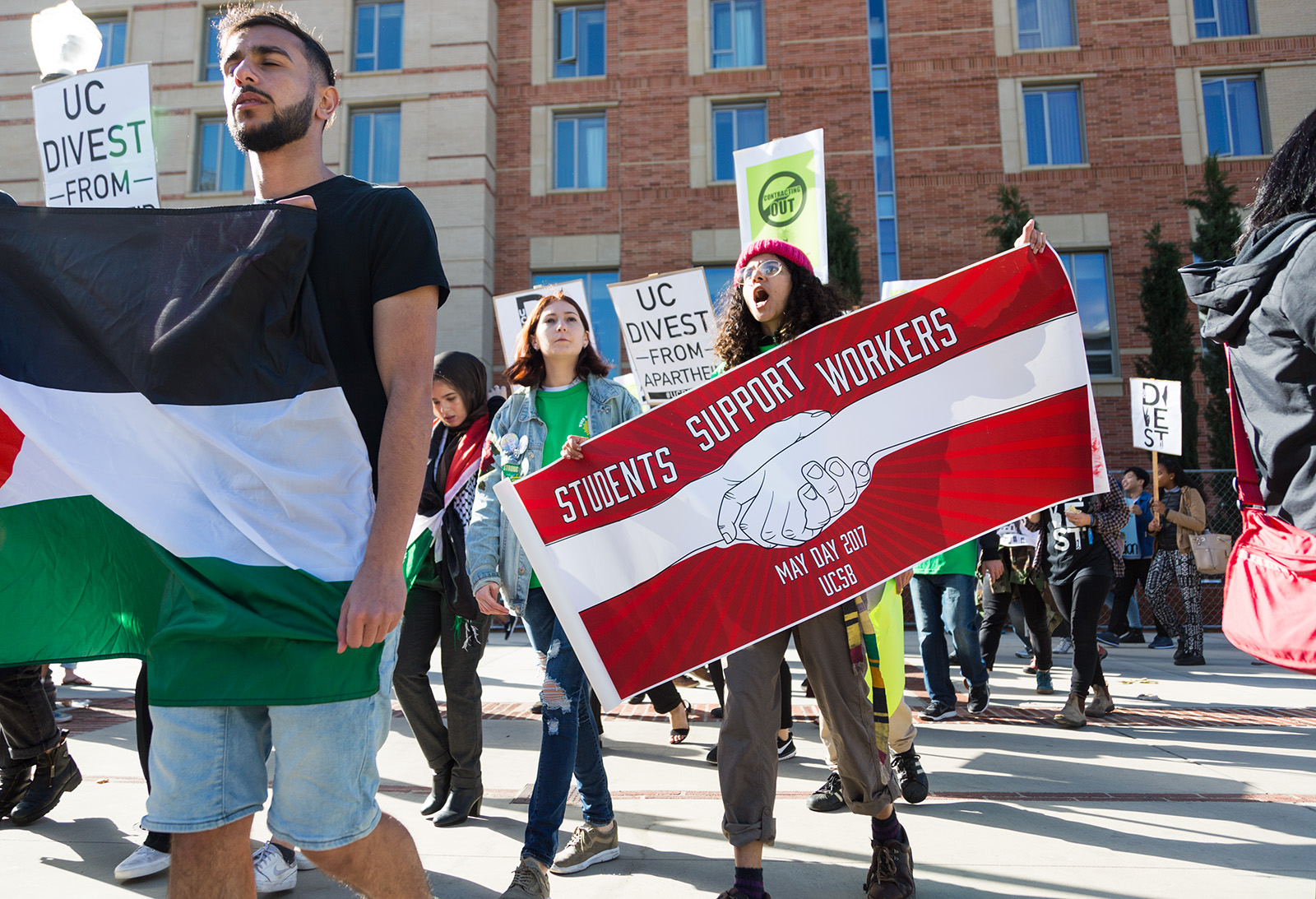 Protesters from campus groups including the California Nurses Association/National Nurses United union, the American Federation of State, County and Municipal Employees and Students for Justice in Palestine, demonstrated in front a meeting of the governing board of the University of California on Wednesday. (Amy Dixon/Assistant Photo editor)

Protesters from various campus groups demonstrated in front of a meeting of the governing board of the University of California on Wednesday.

The UC Board of Regents is meeting at the UCLA Meyer and Renee Luskin Conference Center this week to discuss issues such as nonresident tuition increases and the University’s financial operations. Several groups, including the California Nurses Association/National Nurses United union, the American Federation of State, County and Municipal Employees and Students for Justice in Palestine held a picket line next to the center, chanting “Hey hey, ho ho, the UC Regents have to go.”

The groups were advocating for different issues. The California Nurses Association, which represents registered nurses at UC medical centers, is calling for shorter working hours and more staff in its contract negotiations with the University.

California Nurses Association spokesperson Valerie Ewald said the association was also advocating for union representation for per diem nurses, who are hired on a day-to-day basis at different hospitals.

Students for Justice in Palestine called on the UC to divest from some companies, including Lockheed Martin and Boeing, which do business with the Israeli government.

Mariam Alkhalili, a third-year political science and international affairs student at UC Riverside, said the UC is funding violations of Palestinian human rights by investing in some companies that do business in Israel.

“Our tuition dollars should not be used to fund an occupation,” she said. “(There) are victims of genocide; innocent people are getting killed every day.”

Students and activists also clashed with regents during the meeting’s public comment session.

Liz Perlman, executive director of AFSCME Local 3299, the UC’s largest union, said she thinks the regents need to be more transparent about their business dealings, claiming that companies that have UC Regents on their board received lucrative contracts with the university.

Following the end of the public comment session, as Regents Chair George Kieffer began a discussion on the Board of Regents’ history, one student indicated she wished to speak. Students then interrupted Kieffer as the student repeatedly asked for a few seconds to speak.

Kieffer told her the public comment session was over and continued with his remarks, and students interrupted him by chanting “UC, UC can’t you see, we don’t want your tuition fees.” The student then left the meeting, followed by protestors who continued to chant.

Kosi Ogbuli, a second-year neuroscience and political science student and vice president of UCLA’s Afrikan Student Union, asked the regents not to raise tuition. He said that while his younger sister is deciding where to go to college, his family is worrying about how to support her.