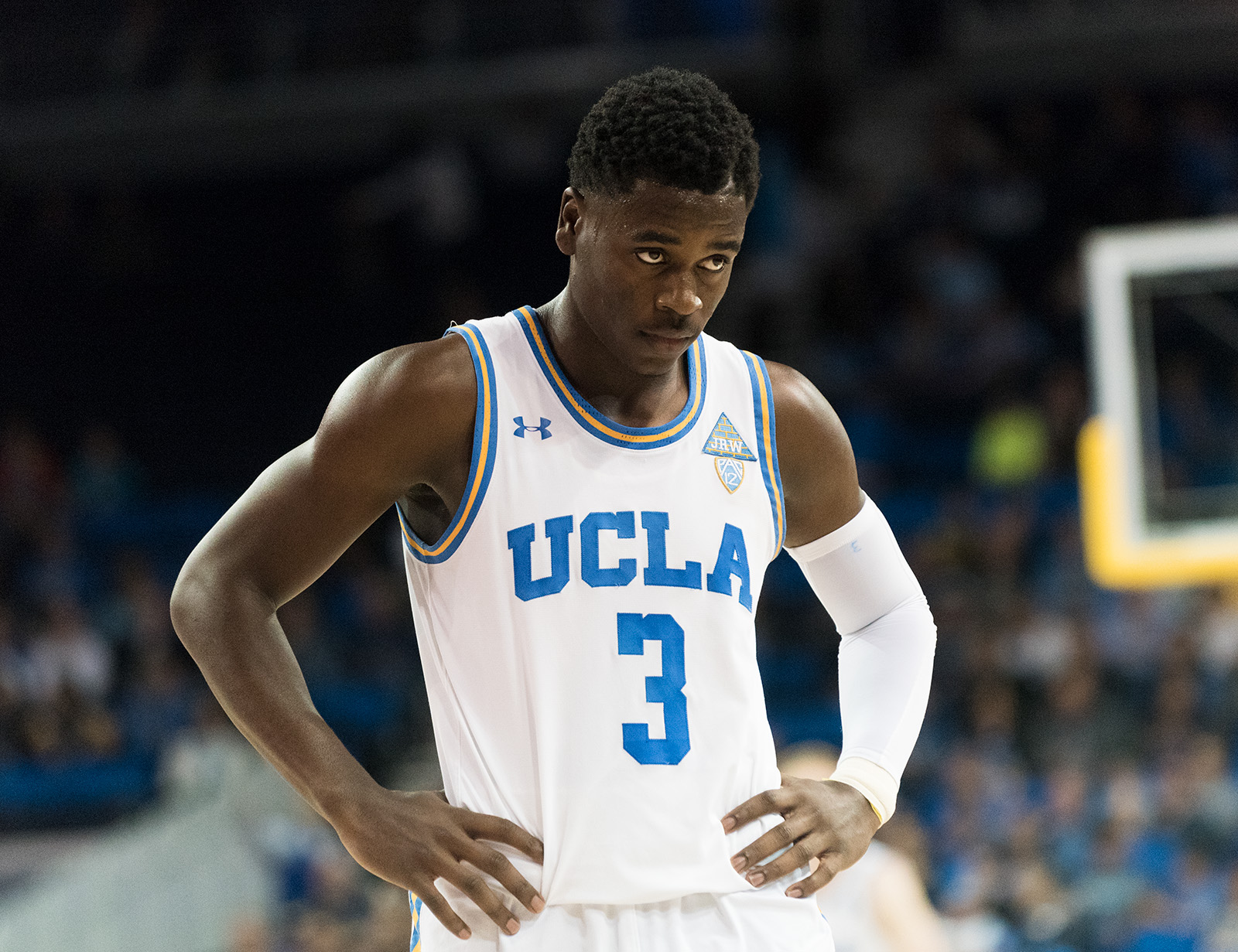 Aaron Holiday said that St. Bonaventure’s was a deceptively long team, which allowed them to rack up turnovers. The junior guard took a loss in what was likely his final game as a Bruin. (Hannah Burnett/Assistant Photo editor)

The Bruins could have opened a bakery in Dayton, Ohio, with the number of turnovers they dished out Tuesday night.

No. 11 seed UCLA men’s basketball looked ill-prepared for the 48-hour turnaround between the NCAA Tournament selection show and its game Tuesday night as No. 11 seed St. Bonaventure’s lengthy zone defense swarmed all over the court in the Bruins’ 65-58 loss.

Despite UCLA’s massive size advantage – St. Bonaventure’s only player taller than 6-foot-10 played just 15 minutes, while all three of coach Steve Alford’s big men are that height or taller – the Bruins fumbled a whopping 20 turnovers, leading to a 30-3 Bonnie advantage on points off turnovers.

“That’s hard to overcome especially in an NCAA game, when you give up that many points,” Alford said. “We’ve been a team over the last month that’s really handled the ball well, and we had a lot of live-ball errant passes today. … So credit their defense, but we were very uncharacteristic with our offense.”

At the start of the game, UCLA’s offense seemed to be firing on all cylinders.

Junior guard Aaron Holiday sunk the Bruins’ first three shots and assisted on their next two. Even without freshman guard Kris Wilkes, who didn’t start for the first time all year after being late to the team bus, UCLA built a 14-7 lead by the first media timeout while only turning the ball over twice.

What followed was a jaw-dropping six-and-a-half minute stretch consisting of eight turnovers, including turnovers on four straight possessions.

“They did a great job of helping and recovering and stealing balls when we passed it,” said senior center Thomas Welsh. “They made a lot of great plays and forced us into some bad turnovers.”

Holiday was often a victim of the hounding St. Bonaventure defense. Whenever he drove past the front line of the zone defense, he was immediately met by a baseline defender with backside pressure from a guard.

The junior finished with a dispiriting double-double of 20 points and 10 turnovers, the highest total of his career.

It wasn’t just Holiday’s fault – most of UCLA’s other players rushed themselves into errant passes as well.

Welsh only scored 2 points in his final collegiate game but had three turnovers, including one in which he sailed a skip pass from the corner out of bounds.

Redshirt sophomore guard Prince Ali had two turnovers that led to St. Bonaventure points. On his first, he drove straight into two opposing players and left his feet, leading him to throw the ball right to Bonnie guard Jaylen Adams. His second was an errant entry pass to Wilkes on the wing that airmailed the 6-foot-8 freshman by several feet.

“They’re a lot longer than you think,” Holiday said. “They use their length to their advantage. Most of the passes I threw up they were able to recover. They close gaps pretty quick. That’s pretty much it. They’re pretty long and they got deflections.”

But against long odds, the Bruins were only down 2 points with 40 seconds left. And similar to much of the season, Holiday had the ball in his hands.

The Pac-12’s leading scorer attempted to play hero ball, but he ended up epitomizing his team’s struggles with three turnovers in the last 30 seconds of the game.

The first was a drive into the paint where three Bonnies converged on him and stripped the ball.

The last two were offensive fouls called after Holiday used his forearm to shove away his defender.

“They were grabbing me, so I used my arm to get them off of me,” he said.

Holiday fouled out following that last call and walked off the court. But by that point, it was too late for the Bruins to turn over a new leaf – they had already played themselves out of the tournament.