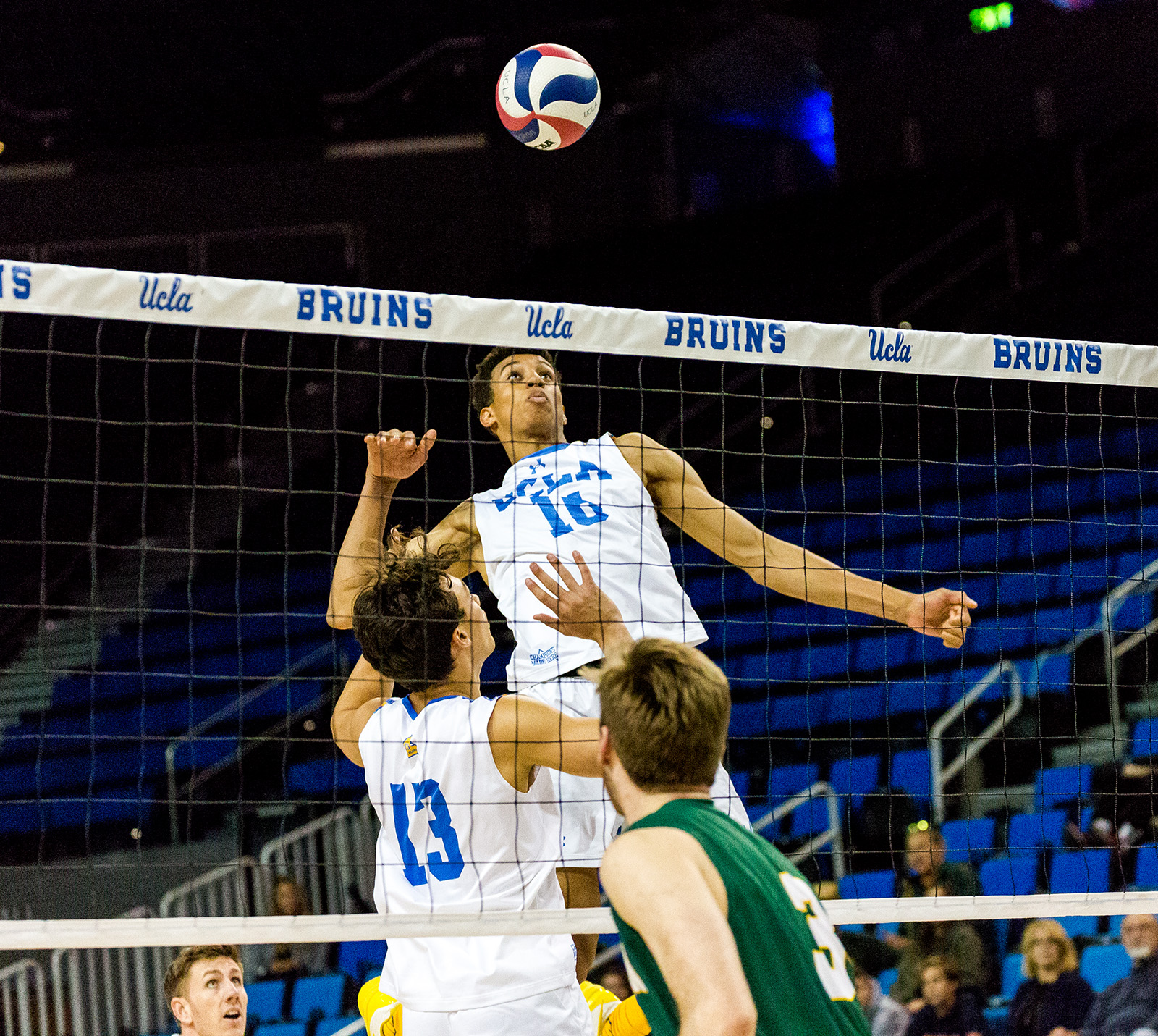 The Bruins swept their opponent Saturday night with a consistent and efficient offensive performance.

The match started off close, with six ties in the first 20 points. Senior outside hitter Christian Hessenauer said the Bruins had trouble figuring out the opposition early on.

“Their pins were definitely good,” Hessenauer said. “They actually started running their middles more in the middle of the first set and we kind of expected that but I don’t think we did a great job. It really came down to our side as usual. We figured it out and played pretty well.”

UCLA hit for .591 in the first set, with Hessenauer and redshirt senior middle blocker Oliver Martin leading the side with four kills, both hitting for .800.

The Bruins took the first set 25-17 with a kill from junior outside hitter Dylan Missry from the left side of the net hit at a hard angle to the front of the Patriot side.

Sophomore middle blocker Daenan Gyimah said although the Bruins lost focus of their opposition early on, they regained focus before the next sets to close the match out.

“I guess we were trying to figure them out and their offense and they were setting a lot of middle in the first set that we weren’t really paying attention to it,” Gyimah said. “But we paid more attention as the game went on.”

UCLA held its lead for most of the second set, with only one lead change and one tie. The largest lead in the second set was 12 points at 25-13.

Junior setter Micah Ma’a dictated the Bruins’ offense in the set, with 11 assists and a set percentage of .632 up to that point in the match. Ma’a also had a serve clock in at 70.8 miles per hour and finished the match with 31 assists.

“(Ma’a)’s definitely been doing some overtime during and after practice and I think it’s been helping as far as connections go,” Hessenauer said. “As far as their block, it wasn’t fantastic and they definitely started committing lot more to the middles, but (Ma’a) was playing great.”

UCLA had only four hitting errors. The Bruins also dominated in blocking, with 10 blocks to the Patriots’ two. As a team, UCLA hit for .493. Coach John Speraw said this balanced offensive performance across the team was a reason for victory.

“There were very few unforced errors. We got blocked a few times but in general we didn’t make any errors,” Speraw said. “So, I think everyone was playing pretty well offensively and the numbers indicate that. I’m really pleased with the way (Ma’a) set the offense today.”

UCLA took the second set 25-13 with a soft-touch kill from senior outside hitter Jake Arnitz, who finished leading the Bruins with 10 kills and hitting for .600.

The Bruins took the set 25-20 and the match with a kill from Arnitz from the left side of the net.

Speraw said Saturday night was a win the Bruins took with a spread offense against a balanced team. Five Bruins had over five kills, all hitting over .250.

UCLA will face No. 14 Concordia and No. 13 Grand Canyon at home this week with a tournament bid and seeding in the MPSF tournament still to play for.