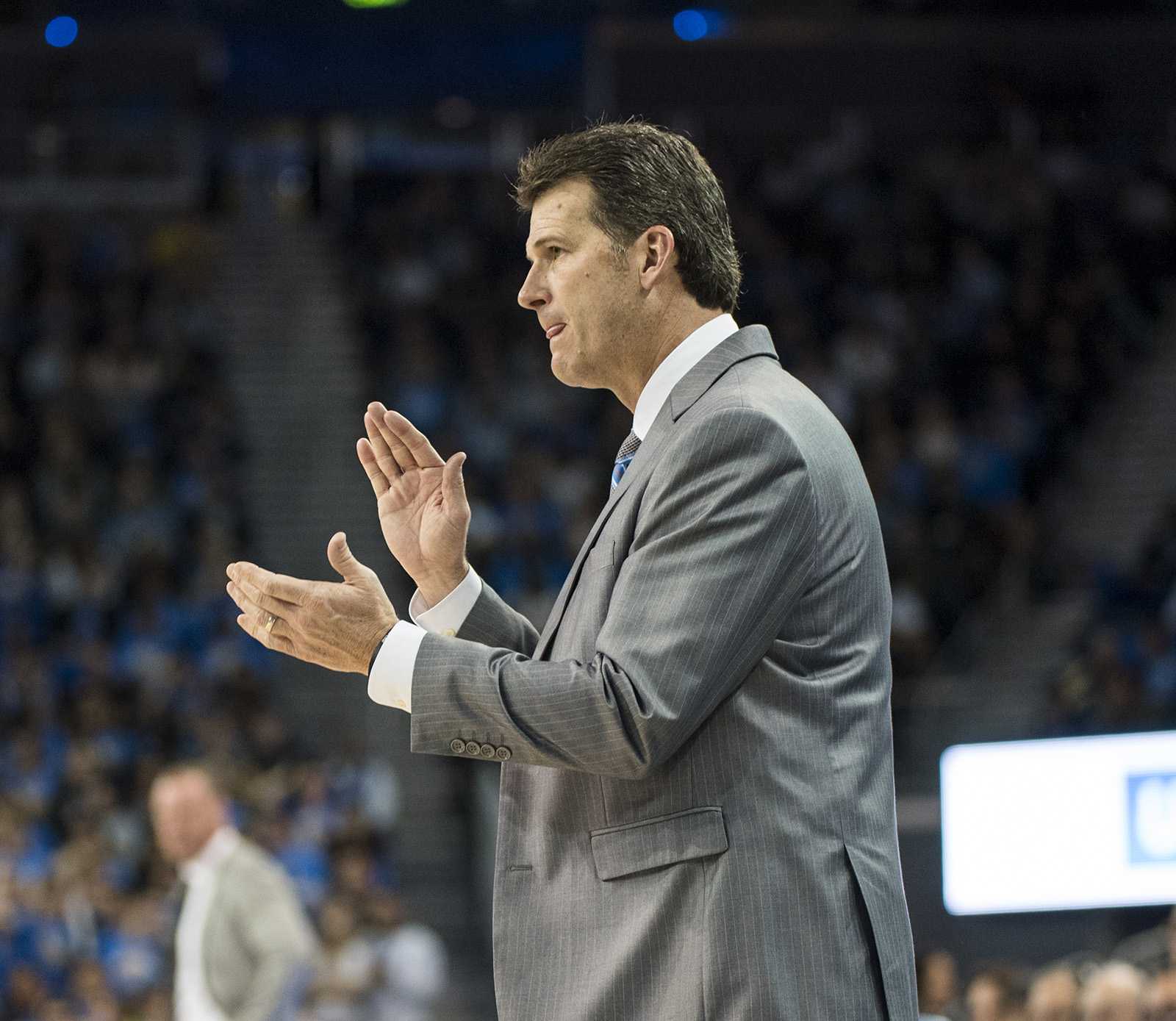 Coach Steve Alford’s team will be making its second straight trip to the NCAA Tournament and the program’s first ever matchup as part of the top 68. (Mackenzie Possee/Daily Bruin senior staff)

Kris Wilkes had never watched an NCAA selection show before – until Sunday.

The freshman guard sat with his teammates in a room in Pauley Pavilion, watching as broadcasters’ at-large bids got dished out alphabetically.

Wilkes had to sit through TCU, Tennessee, Texas, Texas A&M and Texas Tech before learning his team had punched a ticket to the NCAA Tournament. UCLA’s low spot in the alphabet added to the suspense, Wilkes said.

“Man, my heart was beating fast; I couldn’t control it,” Wilkes said. “Especially with all the T’s, there were so many T’s. We were just sitting there waiting around, and then finally seeing our name pop up, so it felt good.”

UCLA men’s basketball (21-11) earned a No. 11 seed and will travel to Dayton, Ohio, for a Tuesday night game against fellow No. 11 seed St. Bonaventure (25-7) in a First Four matchup. The winner will face No. 6 seed Florida in Dallas on Thursday.

Coach Steve Alford said he didn’t know much about St. Bonaventure, but he and Wilkes both noted that the Bonnies had impressive wins against teams like Maryland and Syracuse.

Alford said he was surprised to see his team make it to the tournament as part of the Last Four given how the Bruins finished – beating USC and then going 1-1 at the Pac-12 Tournament. Due to the play-in round, the Bruins may have to extend a potential tournament run by one game.

“Would we like to be playing maybe two games instead of three? Yeah,” Alford said. “But we don’t control that.”

UCLA did not practice Saturday or Sunday, and Alford said the team would probably leave for Ohio on Monday morning. If the Bruins win, they’ll end up missing the entire week of school during the last week of classes before winter quarter final exams.

Crosstown rival USC did not receive an at-large bid, despite its second-place showing at the Pac-12 Tournament. The Trojans were the fourth team out.

“I was surprised for sure,” said junior point guard Aaron Holiday. “We played (them) twice, and they’re a pretty good team.”

Although this was the first time Wilkes ever watched the selection show, it was the last time Thomas Welsh got to take in selection Sunday as a Bruin. This will be the senior center’s third NCAA Tournament appearance.

“It’s a feeling that can’t be beat,” Welsh said. “Because this is what you play for all year long – just to have a shot here in the big NCAA Tournament. So to know that we’re in, it’s very exciting. We’re just really getting ready to go now for this game on Tuesday.”